Home Government Jacob Israel, the Messiah from Iran and a Rooster. 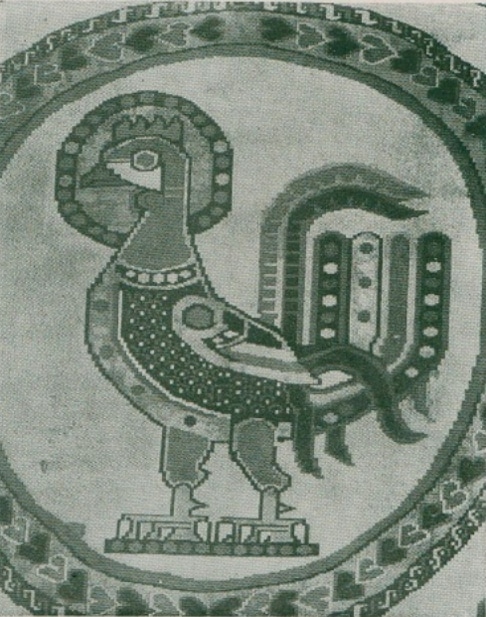 I always look for Synchronicity.

If we look at the current situation in Ukraine, the recent coup led by Victoria Nuland, a Jew descended from Eastern European lineage married to a Kagan, a name used by Khazar kings, perhaps we should consider that we have got the boundaries of “greater Israel” wrong. Perhaps the end result will include Greece which has been destroyed by Goldman Sachs and is now being sold off, western Turkey where Zionists have always been active, Crimea, Ukraine and Israel. Linking the whole territory into one great Empire. The destruction of the Orthodox Christian Church would also become part and parcel of this great plan, as we have seen happening in Eastern Ukraine, Iraq, Syria and the West Bank.

Now I come to one Jacob Israël de Haan (31 December 1881 – 30 June 1924 ). Besides the fact that his biography attempts to totally discredit him because he was homosexual which is not surprising as we soon find out, the discrediting not his sexual preference, what interests me here are two things. His name – Jacob Israel. And that he was, as wikipedia puts it “the first political assassination in Israel” in the 20th century by the above Yitzhak Ben-Zvi, Khazar Zionist from Ukraine. Jacob Israel, not surprisingly, supported a Palestinian State and opposed Zionism, which again not surprisingly got him killed. Now where have we heard that story before?

de Haan in Dutch means Rooster. The Rooster is famous for punctuating Peter’s denial of all knowledge of Jesus/Joshua three times. In effect, de Haan was sounding a warning trumpet.

Symbolically speaking and politically, this de Haan lived out the playbook from 2,000 years ago . Persecution of Israel, the descendants of the firstborn being Jesus, Joshua, Ephraim and Manasseh, the sons of Joseph who today are the Palestinians: Samaritans, Torah Jews, Christians and Muslims. He also symbolises the Ten Tribes of the Kingdom of Israel who were persecuted by the Jews when they fled south into Judea to escape the invasion by the Assyrians.

The Jews have a nick name for the Messiah. Know what it is? As I often say, many times I learn more from those I disagree with, than those who share my conclusions.

“Rav Shmuel Weingurt adds that we find in the Midrash (Pesikta Rabati 37):

“Ribbi Shimon ben Pazi said: At the moment that HKB”H raises the Mashiah until the heavens and spreads the glory of His honor over him because of the nations of the world, in front of the wicked Persians, He tells him, “Efraim [a nickname of Mashiah]! Our righteous Mashiah! Judge these people and do with them whatever you want for were it not for the mercy which overcame you in the extreme, they would have already destroyed you from the world in one second.””

This whole extract is so convoluted and contrary it makes your head spin. Seems to me that the Rabbis have entangled themselves in their own conflation and cognitive dissonance in the same manner that the Elohist text of Genesis 1 and the Jawist text of Genesis 2 are supposedly referring to the same God when in fact their origins, philosophies, social and political differences aptly fall into the split in Israel between the Northern Kingdom of Israel and the tribes of Ephraim and Manasseh on the one hand and the southern Kingdom of Judah and the tribes of Judah and Levi on the other. The “… glory of His honor … because of the nations of the world,” is in turn in alignment with Genesis 1 where all nations and peoples are created in the image of God. There is no “chosen,” as there is in the Jawist Genesis 2 text.

The Ribbi even calls the Messiah EFRAIM, which rather than being a nickname is in line with Jeremiah 31.“For I am a father to Israel and Ephraim is my firstborn.” Thus sayeth the Lord. In the Old Testament Jeremiah admonished the Jews for treating their brothers, the Hebrews as slaves when they fled south to escape the Assyrian invasion. In effect they were persecuting Israel itself. The children of Rachel, the Joseph tribes. Rachel mourns for her children in both the Old Testament and in the New. EFRAIM is not David of the Tribe of Judah, who was not descended from Sarah, Rebbecca and Rachel but from Leah the cow, and according to the Dead Sea Scrolls Habbukuk text, David was not considered one of the Righteous because he had more than one wife.

EFRAIM is also called righteous as were the Essene Teachers of Righteousness who opposed the Sadducee priesthood, the Temple and the money lenders on the Roman tax farm that was impoverishing the people and putting them into perpetual debt. Again, sound familiar? Ask Greece and Goldman Sachs.

The above quote also conveniently forgets that is was the Persians who returned the Jews to their land and freed them from Babylonian captivity and allowed them to build their temple. Isaiah even refers to Cyrus the Great as “Messiah.” And yet, Cyrus the Messiah, Cyrus the Great, a Persian, is described as wicked while each year the Jews celebrate the holocaust of Purim instead, with little to no mention of this  saviour who freed the whole of the Middle East. His religious, social and political policies put most leaders since his time to shame. There have been very few like him throughout history.

To quote from Wikipedia:

The Book of Ezra narrates a story of the first return of exiles in the first year of Cyrus; for this, Cyrus is addressed in the Jewish Tanakh as the “Lord’s Messiah”. Glorified by Ezra, and by Isaiah, Cyrus is the one to whom “the LORD, the God of Heaven” has given “all the Kingdoms of the earth”

In the New Testament we again have conflation this time with three streams of belief now rolled into one story, which as I have pointed out in my other articles creates cognitive dissonance in the reader and irrational behaviour in those who believe everything without question. And we wonder why the Western world is living in a state of insanity where truth and lies have become one and the same thing. Where debt is wealth and slavery is freedom.

1. We are told through a dubious genealogy that Jesus was the King of the Jews descended from David, a subject that I have elaborated on in Jesus Was A Palestinian.

2. He was the son of Joseph, from the Northern Kingdom of Israel being Galilee and as a descendant of Joshua and in turn Ephraim in accordance with Jeremiah 31 and Jacob’s blessing, he is the firstborn of Jacob Israel, the son of the Lord. “If you have seen me you have seen the father.”

He is also the corner stone (which the builders rejected,) the shepherd, the branch (Nazer=Nazerene), the fruitful bough, the vine and the tribes of Israel are the branches, ( even Judah tethers his donkey to this vine)  and wears the crown inherited from Jacob’s blessings on Joseph.

3. He has all the attributes of Cyrus the Great. The Magi are at his birth. Like Cyrus he escapes infanticide. Like Cyrus he is called King of Kings and like Cyrus he is referred to as Messiah and the saviour. Like Cyrus he exhibits liberal and tolerant views towards others. The Greek authors who were greatly influenced by this Persian leader appear to have incorporated the story of Cyrus with the story of Jesus. The Samaritans, Galileans, Essenes and many other groups from the Ten Tribes who were opposed to the Sadducee High Priesthood, the Herodian Kings and the occupation by Rome,  longed for a Messiah to come and relieve them from slavery as Cyrus had once relieved them from bondage in Babylon. The world has not changed much. Instead the tax farm and debt slavery has engulfed the whole planet and the cry is yet again for the Messiah to return.

4. Like Joseph before him in the Old Testament, Jesus in the New is betrayed by Judas and sold. And like Jacob Israel de Haan 2,000 years later, both Jesus and his brother James the Righteous are persecuted and killed by “Jewish” extremist fundamentalists who advocate Genesis 2 over and above Genesis 1 and intolerant religious, sexist and racist views. So called “heretics” in an on going and never ending inquisition.

History repeats. The story never changes. Perhaps it might have had a chance of changing if the Great Library of Alexandria had not burnt down and texts from all over the ancient world could have been compared to the Biblical texts that have been presented to us as infallible, which on closer examination they clearly are not.

In this the 21st century we have finally have a window of opportunity to sift the chaff from the wheat, the true coin from the false, before it is too late, but time is running out. As happened before might happen again. In fact it is happening. Ancient sites and texts have been and are being destroyed across the Middle East due to the wars in Afghanistan, Iraq, Libya, Syria and Yemen. Should Israel bomb Iran all evidence of ancient history will be obliterated. And with it, the Messiah, the saviour of Israel and a religious and political policy of liberalism, tolerance and respect for all where Righteousness and equal justice prevail.