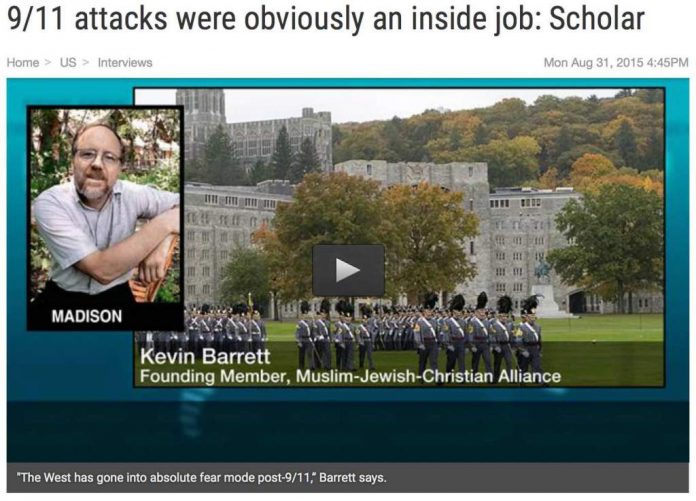 The growing anti-Islam rhetoric in the United States underlines the need for further research into the origin of the September 11, 2001 attacks, an American scholar and journalist in Wisconsin says.

In the most recent provocation against Islam, a US military professor has released a paper calling on the United States to target critics of the so-called war on terror as well as Islamic holy sites.

Dr. Kevin Barrett argues that William Bradford has a philosophy similar to the Daesh terrorist group.

“He is using the same value system of ‘kill everybody who doesn’t agree with me’ as these lunatic ISIL people,” said Barrett, a founding member of the Muslim-Jewish-Christian Alliance.

People like Bradford are “misrepresenting the current so-called war on terror as some kind of terrible war of aggression by Muslims against the West,” he told Press TV on Saturday.

“This kind of hallucination is a good example of how the West has gone into absolute fear mode post-9/11,” he noted. “In Bradford’s paper, he makes a lot out of 9/11. He uses 9/11 as his one and only piece of evidence that there is some kind of offensive threat coming from the Islamic world.”

“This underlines the need for the very scholars, journalists and lawyers that he (Bradford) wants to murder to stand up and speak the truth; that 9/11 was obviously an inside job,” Barrett added.

US officials assert that the attacks were carried out by al-Qaeda terrorists.

However, many experts have raised questions about the official account.

Barrett argued that the 9/11 attacks were carried out through a “controlled demolition” technique by placing explosive material inside the twin towers, causing the structures to collapse on themselves in a matter of seconds.

The US military’s educational institutions have come under sharp criticism before for promoting the idea of “total war” on Islam.

In 2012, Chairman of the Joint Chiefs of Staff General Martin Dempsey ordered the entire US military to scour its training material to ensure it doesn’t contain anti-Islamic content.