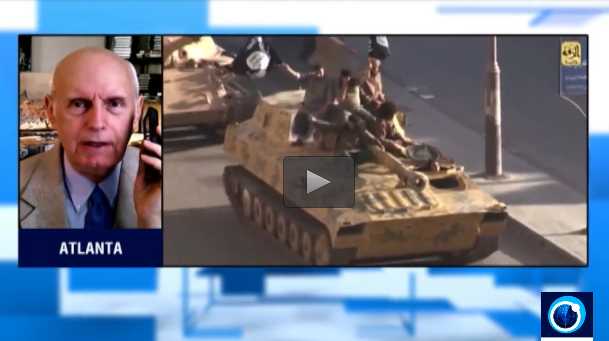 [ Editor’s Note:  This was a great news topic to get, with the renown General Soleimani. But this Daesh material, because of all of its layers, is difficult to get into deeply in a two question interview. The public can only absorb so much and remember what you said in three minutes, when the studios want “tight copy”.

For example, the shadow government aspects, and the questions of “out of the chain of command” operations being run under the guise of official ones, are grey areas to explain. Without a participating direct source, it can be hard to tell which are just the age-old contracted out operations with plausible deniability and which are actually rogue operations.

Because this has been going on so long, we have been able to make some determinations due to familiar rogue operators being on the scene there — people who have never changed their spots and come to Jesus. That is why The Debate Show, with its 24-minute format, is great to be invited on, as you have a lot more time.

But, we take what we can get, as these slots are highly sought after, and the exposure has been very important in getting around the US corporate media blackout on VT. If it were easy, then anybody could do it. So we keep soldiering on… JD ]

Following is a rough transcription.

Press TV: You have the commander of the Quds Forces of Iran’s Revolutionary Guards Corps, he carries a bit of weight, saying this about the US regarding this Daesh terrorist group that the US is using it to its advantage, to achieve its goals in the Middle East. What do you think?

Dean: Well, he is right on the money. I would say that the General has very good sources, he is actually highly thought of in terms of skill and expertise on this side of the big pond. But he is confirming… this is an old story, it is widely known in America now that the US and the West have been involved in using terrorism as a destabilization tool to avoid having to use boots on the ground, having pilots shot down and being taken prisoner, because they have found this tends to eliminate public opposition to being involved in external wars.

And for some strange reason, this trend of basically running terrorist wars as a replacement has not gotten the general public revulsion because they don’t see the long-term threat that it can represent. They don’t understand the geopolitics.

Of course, we all know in the media this is classic divide and conquer tactics. But no one here is really accepting responsibility for the carnage, the death, and the destruction that is being wrought on a lot of innocent and independent people so that powerful Mideast governments, the [Persian] Gulf states and the US can keep the Mideast under their control.

Press TV: There has been this talk about partitioning Iraq, partitioning Syria and pretty much breaking up the Middle East into smaller pieces, in the bigger picture I guess for the US. And remember Leon Panetta saying that we are looking at a thirty year war, I think the outgoing General Ray Odierno also said that. So do you think that they are going to keep using these terrorists because they have this grand scheme that they want to break up the Middle East into small pieces?

Dean: I’m pessimistic for a couple of reasons. They can afford it; the [Persian] Gulf states have paid a lot of this, the American taxpayers are not getting hit too heavy. They feel that in the long-range people are just going to get tired of it, they are going to get so sick of war that they will be willing to agree with any kind of political settlement to get it stopped.

We don’t have any help; the UN has been pretty much worthless here. China and Russia, although they have been supportive, they have not been willing to get involved to the extent  of trying to confront the West in this, because I think they feel they are being baited to being sucked into this and they are hoping that this will end up being America’s Vietnam but it isn’t because there is no American boots on the ground.

They have an endless supply of these jihadi fighters and nobody cares how many of these people get killed and nobody seems to care a lot, except the people in their own country, how many civilians are getting slaughtered in this whole process.