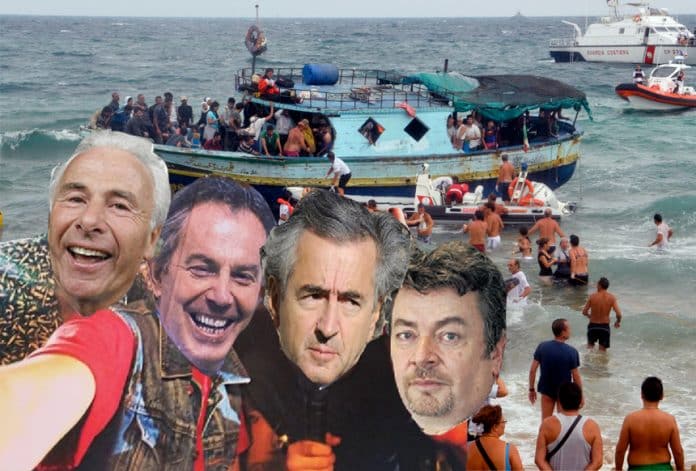 Yesterday Germany turned on Britain over the migrant crisis. Germany expects to accept 800,000 asylum seekers by the end of the year. Britain is also preparing for the growing refugee disaster — It closed its gates. The German call makes some sense I must admit. After all, it was Tony Blair and his Labour Government that launched the criminal war that led to this global humanitarian crisis. But Blair wasn’t alone. In fact he was merely a Sabbos Goy.

When Blair took Britain into Iraq his chief fundraises were Lord cash point Levy  of the Labour Friends Of Israel. Jewish Chronicle writers David Aaronovitch  and Nick Cohenwere the prime advocates for the immoral interventionist wars in the British media and beyond.  Since then, we have seen the Jewish lobby openly pushing for more and more wars (Syria, Iran, Libya  etc.). In France it was the CRIF  and Bernard Henri Levy that pushed for the intervention in Libya that has turned the Mediterranean Sea into a death trap.

I don’t know how many refugees Lord Levy, Bernard Henri Levy and David Aaronovitch can fit into their spare rooms. But I do believe that the Jewish community should immediately place itself at the forefront of any humanitarian effort for the refugees.  First because Jews claim to know more than anyone else about suffering.  But mainly because it was Jewish aggressive politics and Zionist global lobbying that brought this colossal refugee crisis about.