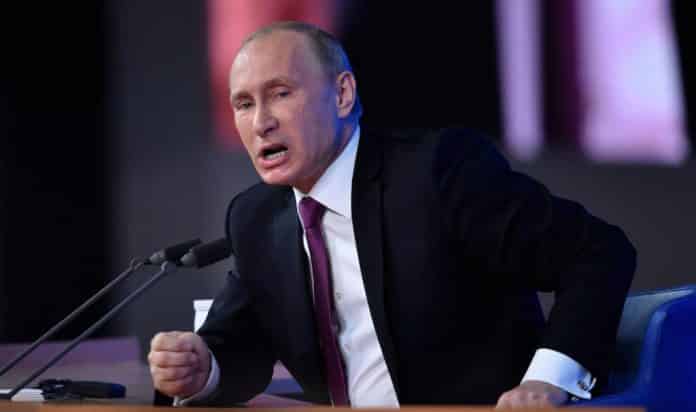 [ Editor’s Note:  The Pentagon and VT went in separate directions on this “Russia pours arms and men into Syria” story. They quickly told Congress that the CIA was their source for the story… but strange that military Intel would not have been the source, if it was correct.

Again, the story was so ludicrous as to have held up publication, but it seems someone on the night shift was eager to get some brownie points for tagging Putin as a neo-imperialist. We waited for Putin’s office to make a statement, and those folks have of course have said, “No way, Jose”.

Gordon got to have a little morning fun pulling on the lion’s tail with his Kosher Klowns Burn Pentagon with Syria Hoax article. We wondered, “when will they ever learn?”

When Putin spokesman Dimitry Peskov sets out to answer a question like this, we are confident that his information is correct. But the Russians are cool. They don’t use the terms, lie or hoax, as we would, but the nicer, “One shouldn’t believe these reports”. I can’t even imagine Gordon ever saying anything like that.

The Pentagon people will be having their little internal investigation on this to see where the weak link was initially. But the doubling down by using the CIA as a cover source, who we know always says “we can neither confirm nor deny” was a desperation ploy.

As the Obama vote on the Iran deal was approaching the magic 34, we had been expecting some Hail Mary passes to trip up getting the big veto override prize. This Russian invasion of Syria silliness is in the correct time frame for that. So we hope the boys from the Pentagon’s Early Bird learn something and move on. Credibility is hard to build, but easy to take down… Jim W. Dean ]

The Kremlin has dismissed media reports alleging that Russian jets are to participate in attacks against Islamic State (IS, formerly ISIS/ISIL) in Syria.

On Monday, Israeli news site Ynet news reported that a Russian “expeditionary force” has arrived in Syria to set up a camp at a government airbase near Damascus in order to conduct air strikes against IS positions.

The report, which cited unnamed Western diplomats, added that “thousands of Russian military personnel are set to touch down in Syria, including advisers, instructors, logistics personnel, technical personnel, members of the aerial protection division, and pilots who will operate the aircraft.”

The author of the report, Alex Fishman, told RT that he cannot comment on the legitimacy of his source.

On Wednesday, unverified images surfaced on Twitter suggesting that Russian-made jets and drones were sighted in Syria. On Tuesday, RT contacted a military source who also denied Russian troops involvement in Syria.

“There has been no redeployment of Russian combat aircraft to the Syrian Arab Republic,” the source said. “The Russian Air Force is at its permanent bases and carrying out normal troop training and combat duty.”

Earlier media reports suggested that Russia has supplied Syria with Mig 31 fighter jets under a bilateral contract signed in 2007. In August, Turkish media outlet BGNNews.com reported that six jets have landed in Damascus. The report was quickly dismissed by the CEO of the Russian Aircraft Corporation Mig Sergey Korotkov.