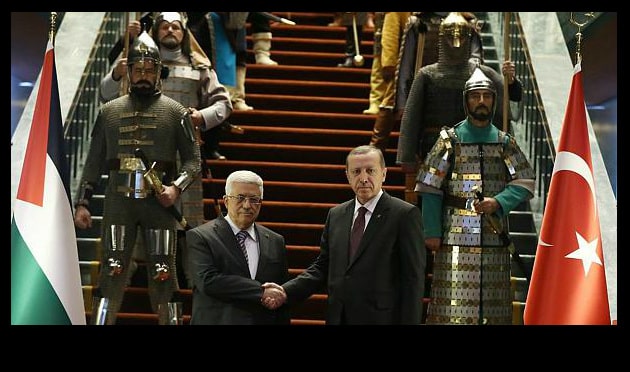 Five years after the creation of the Palestine Liberation Organization by the Arab League, Yasser Arafat took over the organization and turned it from a “liberation organization” to a “closed criminal enterprise”, serving the leadership and failing the Palestinian people at every turn.

Instead of liberation, Yasser Arafat and his cohorts returned to Occupied Palestine to manage the Israeli Occupation.

It was not the Palestinian people who voted for the PLO as their “sole legitimate representative”, but the 1974 Arab Summit in Rabat that gave the PLO such international legitimacy. This came about after a bloody mini war in which armed Palestinian factions challenged the sovereignty of King Hussein over Jordan.

Soon after this recognition by Arab heads of states, most of whom lacked legitimacy, Arafat traveled to the UN to give his famous speech, with the UN following suit by giving the PLO “observer” status as “representative of the Palestinian people”.

It was not until November 30, 2012, when the UN General Assembly voted to recognize Palestine as a “state”. However full sovereignty was left to Israel to give the Palestinians such states in accordance with the agreement negotiated and signed by both Arafat and Abbas. Palestine is an “observer state”, lacking votes or flag.

Full sovereignty and full rights must be voted on in the UN Security Council where the US can exercise its veto. The vote by the UN General Assembly recognizing the “state of Palestine” did not change anything on the ground, nor the disenfranchised status of millions of Palestinians in exile, waiting to return.

Israel continues to occupy the “territories”, exercising full military, demographic and economic powers. Even after the Oslo Accord, Israel has shown no interest in giving up what remained of historic Palestine.

After twenty years, hundreds of thousands killed, tens of billions looted and stolen, Oslo was the best that Arafat, Abbas and the PLO could deliver to the Palestinian people. This amounts to a perpetual occupation.

The PLO killed; snuffed the First Intifada; failed the Second; killed the Two State solution; killed the One State solution; and succeeded in having a perpetual contract to manage the Israeli Occupation. This is not so great an achievement for a “liberation” organization.

Under the terms and conditions negotiated in Oslo, Israel retained total security control over the entire Occupied Territories with the Palestinian Security Forces, acting as an auxiliary force to the Israeli IDF and Shin Bet. The AP Security Forces could not protect a chick or a tree, let alone a life, as we have seen many times.

Arafat and Abbas committed to the safety and security of Israeli citizens armed and unarmed to the tune of $1.4 billion annually, far exceeding the joint budgets of education, health, transportation, social services and infrastructure.

The Oslo Accord was a financial windfall for both Israel and the PLO/Fatah leadership. Israel was able to save at least $2 billion a year, the cost of running the territories. Israel made good use of the saving, granting each illegal settler $28,000 in annual subsidies.

On the other hand, all those who failed at liberation came back with Arafat and Abbas to manage the Israeli Occupation, and taking full advantage of the culture of corruption, nepotism, personal loyalties, and ineptness that characterizes the tenure of Arafat and his successor, Abbas.

Many senior and mid-level political and security operatives became multi-millionaires, benefiting from business opportunities, kick-backs, racketeering, or other illicit activities.

Within a few years, they became rich, owning properties in the Occupied territories, in Cairo, Amman, and the UAE among many places — living the lifestyle that no sitting Israeli official dare afford. Many became owners of NGOs, getting tens of millions in funding to produce papers talking about the Occupation, but falling short of doing something to end the Occupation. Oslo became a business for many inside and outside of Palestine.

Keep in mind that Oslo created a legal entity, the Palestinian Authority, (PA) that “separated” the people under the Israeli Occupation from the refugees and in the Diaspora. As such, the PLO became a name only, with no legal or basic function other than giving Israel legitimacy, and with Abbas having total control over all budgets and finance — the basis of his power and legitimacy.

Which brings us to the recent calls by Mahmoud Abbas to convene the Palestine National Council (PNC), supposedly, the Palestinian Parliament representing Palestinians under Occupation and those in the Diaspora.

It is clear Abbas’ intention is to consolidate his absolute control, get rid of challenges, and pass the reins of corruption and incompetence to one of his cohorts.

It should be noted here that the PNC was never an elected body, and all of its members are selected by the Chairman of the PLO, the Executive Committee and Central Committee of the PLO; and the appointments are in accordance with a quota system designed to give Fatah the majority of seats.

The PNC has no power, real or imagined — it acts as a rubber stamp with no value or importance, a shameless “Parliament”. It abdicated all of its responsibility to the people whom it is supposed to represent.

Arafat, the fraud and manipulative con artist, made sure that he controlled all so-called “institutions” designed to perpetuate his control and that of his successors, and limited  real changes that might have put the people in charge. He, like Abbas, made sure there is distance between the leadership and the people when it comes to real issues and decisions that affect the people and liberation; thus it is the PLO Executive Committee that approves everything. The Executive Committee is appointed, and never voted on by the people.

Hence in the entire history of the PNC, there was never any real debate on, let alone sanctions against, the many disastrous decisions made by Arafat, Abbas, and the PLO Executive Committee in Jordan, Lebanon, Syria, Iraq, nor in Kuwait, where tens of thousands lost their lives, and where tens of billions of dollars were lost.

There was never a debate over Oslo and all of its failings, then and now. In fact the PNC did not meet for over 20 years. The PNC is nothing but a shameful sham.

Keep in mind, the Palestinian body that received Bill Clinton in Gaza (1996) — passing by show of hands nullifying the Palestinian National Charter, giving recognition to Israel and denying the right to resistance and self-defense — was hardly representative of the PNC, but rather a bunch of “personalities” herded in as straw men for a tragic show orchestrated by Arafat and Abbas.

A full recognition for a fist full of dollars. The Palestinian people deserve this contempt for their silence and for their failure to force a change of a leadership that had sold out.

Arafat and Abbas structured these “Palestinian Institutions” in such a way, making it difficult for any changes to come from the people directly or indirectly, and making it even more difficult for any accountability or changes of the “leadership” by the people except the members of the mafia family, the Executive Committee. Even this Executive Committee for the most part has no say so.

More important, Arafat and Abbas made sure that any group trying to find an alternative to the PLO will face a wall of legal challenges by the PLO, Israel and the US, all of whom are quite satisfied with the present situation in Occupied Palestine and with the PLO leadership and as the manager.

Arafat and Abbas secured life perpetuity for the PLO when Israel recognized the PLO, thus denying any group of Palestinians (outside of the PLO structure) the right to sit at the table as a replacement or as an independent party.

Many beneficiaries of the PLO and the PA will argue that Arafat, Abbas and the PLO leadership did great things for the Palestinian people by gaining international recognition, with many countries recognizing the State of Palestine.

Since Oslo, more than 600,000 settlers moved to the Occupied Territories; more than 450 miles of Apartheid Wall were erected; more than 800,000 olive and fruit trees were burned or uprooted by the Israeli Army and the armed criminal settlers.

More shameful and disgusting is the way the PLO leadership benefits from the 3,000 or so Israeli-issued VIP passes that allows senior PLO and Fatah officials to zip through the more than 550 security checkpoints, while millions of people, young and old, have to wait hours, if not days, to pass through humiliating metal gates like cattle just to get home or visit neighbors or attend their fields or get to a hospital.

Yes, the PLO leadership achieved great things for itself; benefiting from corruption and nepotism, benefiting from business projects funded by the “international community”, in which key personalities receive shares and kickbacks without paying a dollar; benefiting from land deals as a result of inside information on zone changes and largesse bestowed by Mahmoud Abbas, who rewards loyalty and incompetency.

Oslo allowed for the creation of the Palestine Legislative Council (PLC) representing a people under Occupation; financing and budget is left to the Chairman of the PLO, who exercises full and unchecked control over all funding with no accountability or transparency.

Abbas refused to allow the elected PLC even to formally convene, making sure all decisions are passed through the Executive Committee, which votes as he demands.

I can only laugh when defenders of the PLO talk about “institutions” that must be preserved and protected, and about international gains achieved. In the end, the Palestine Liberation Organization was never a “liberation” organization, but a racketeering mafia that failed at liberation and succeeded in managing the Israeli Occupation by paying for it and stealing from it. Did the hundreds of thousands who died appreciate the way things turned out?

Notwithstanding all the legal, political challenges and difficulties, the Palestinian people, at least those in exile or Diaspora, must organize into a “legal entity” that can, over time, secure the legitimacy from the very people it supposes to represent. It must do this through membership and direct votes and challenge a corrupt and failed PLO, then take the challenge to Israel to gain either freedom and independence, or one state for all of its citizens.