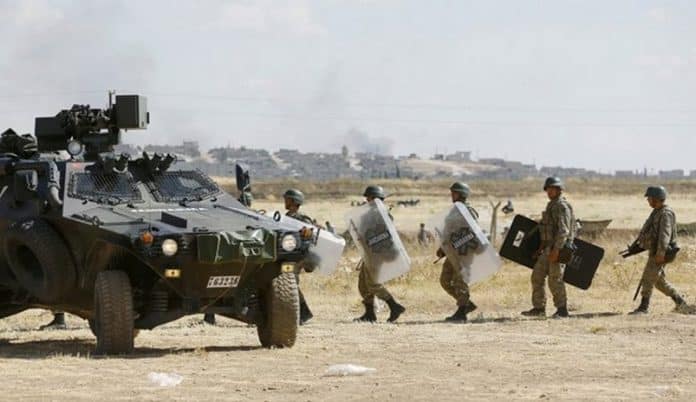 Turkey Deploys Ground Forces into Iraq to Battle Kurdish Militants
After months of bombing and endless promises, Turkey has yet to fly a single sortie against ISIS forces.  Read why.
Turkey deployed ground forces across the border into northern Iraq on Tuesday for the first time since 2011, stepping up its battle against Kurdish forces.

More than 40 Turkish warplanes, meanwhile, hit Kurdistan Workers Party (PKK) targets overnight between Monday and Tuesday in this part of Iraq, where the group has bases.

The cross-border operations and air strikes came amid a wave of attacks by the rebels of PKK that killed at least 31 soldiers and police since Sunday, Reuters reported.

The developments, however, could frustrate the US-led alliance’s efforts against the ISIL terrorist group because Turkey is now hunting down the very fighters who are trying to hold back the militant group from taking more territory in Syria and Iraq.

Turkey, a NATO ally, signed up for a more active participation in the US-led coalition, after a deadly suicide bombing in July blamed on ISIL. It has allowed US warplanes and drones to take off for missions against ISIL in Syria and its jets have struck ISIL targets near its border, in Syria.

But the country’s main focus has been its fight against the PKK, which has waged a decades-long insurgency for Kurdish autonomy. President Recep Tayyip Erdogan has said in comments reported by the Turkish media that ISIL is a lesser threat to Turkey than the PKK.

Turkey’s ground and aerial incursions against the PKK pose a difficult situation for the US-led coalition. The Kurds are doing much of the fighting against ISIL across the border in Syria and in northern Iraq. The PKK, which maintains bases in northern Iraq, has fought alongside Iraqi Kurdish peshmerga forces.