Home Investigations Dust Has Not Settled On 9/11 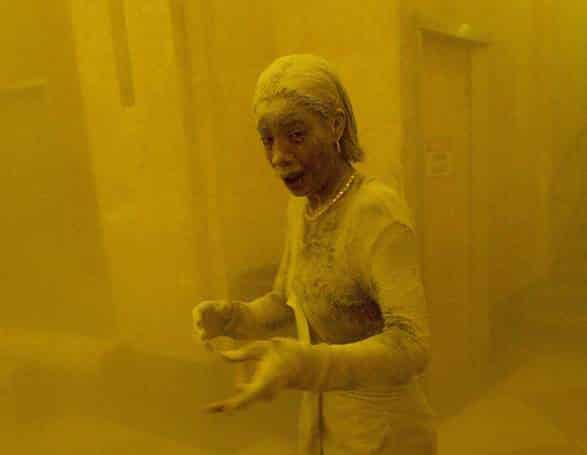 It’s been 14 years since 9/11 but the dust has not yet settled on this auspicious event nor has it left the pages of the infamous and discredited official 9/11 Report. The 9/11 Dust Lady Marcy Borders just died from stomach cancer and complications which could be traced to 9/11 and she was only 42 years old. Thorough analysis of the 9/11 dust appears to confirm the theory that the towers imploded and that energetic materials were used to destroy the towers which ties in with well-established government sanctioned collapse theories. It is becoming increasingly obvious that the 9/11 dust will not settle until the full 9/11 truth emerges: Allen L Roland, PhD

“The second anniversary opened an internal crack in Sonia, a fissure through which she released the explosive feeling that had horrified her for two years. The conflagration that had burned so many, that had pushed people into the open air, onto the ledges from which they jumped, some of them on fire, had left its unspeakable images inside my niece. …Sonia didn’t want a world in which buildings fell down and wars were fought for no reason.”  ~ Siri Hustvedt, The Sorrows of an American

Ms. Marcy Borders was an employee of Bank of America in 2001, and was working on the 81st floor of the north tower of the World Trade Center on the day of the attacks and was eventually led downstairs and into a neighboring building by another person, where this picture was taken by photographer Stan Honda of Agence France-Presse

She described her experience in a video interview published by the filmmaker Mike McGregor three years ago. See  2 minute video   plus attached 29 minute World Trade Center best actual time 9/11 film footage I have ever seen.

“We had no idea what was going on,” she said of the plane’s impact. “The way the building was shaking, I couldn’t sit there.”

In the chaos that followed, Ms. Borders retreated to a crowded stairwell where she was chased by a cloud of smoke and dust.

“Every time I inhaled, my mouth filled up with it, I was choking,” she said. “I couldn’t see my hand in front of my face. I was just saying to myself and saying out loud that I didn’t want to die.”

After surviving 9/11 Ms. Borders struggled with alcohol and drugs dependency, losing custody of her children.

“I didn’t care about myself or anyone else. I couldn’t deal with life. I had become a garbage can. I dropped to around 90 lb. My life wasn’t getting any better. I wanted to end it,” she told The Times around the same time.

Following a stint in rehabilitation in 2011 she remained sober. She was diagnosed with cancer in 2014 and started a course of treatment.

Writing on Facebook, her cousin John Borders, said she “unfortunately succumbed to the disease that (have) ridden her body since 9/11…. In addition to losing so many friends, co-workers, and colleagues on and after that tragic day, the pains from yesteryear (have) found a way to resurface, he wrote. 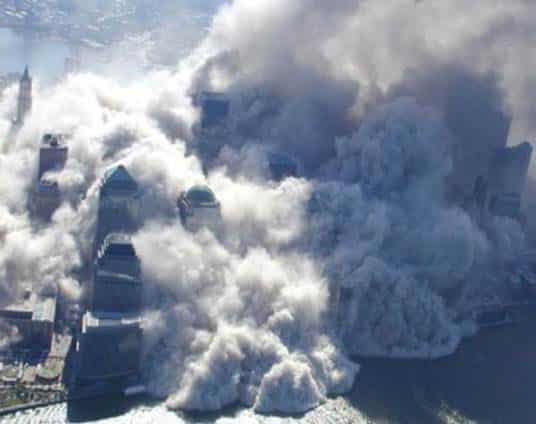 Photos of the North Tower toxic 9/11 dust from helicopter

By 2008, if not earlier, the most detailed and comprehensive analysis of World Trade Center dust had been published by a group of independent researchers including physicist Steven P. Jones and chemist Kevin Ryan. Combining data from earlier published studies with results from experiments on dust samples they had obtained, these scientists found both the apparent products of aluminothermic pyrotechnics and unexploded fragments of such pyrotechnics. These researchers also examined published data on the emissions of gases from Ground Zero, and supplied straightforward hypotheses, consistent with the view that energetic materials were used to destroy the complex, for observations that were highly anomalous within the context of the government-sanctioned collapse theory. See report ~ PHOTO OF BUSH, CHENEY, RICE, POWELL, ETC

The league of Scoundrels

Isn’t it interesting on that auspicious day that there was time taken to take these photographs of top administration officials, including Bush, Cheney, Rice, Tenant and Powell reacting to this crisis ~ when in reality they may well have been thinking how do we cover up our role in this treasonous act of an administration that was obviously bent on war and would soon be attacking the sovereign state of Iraq for a well-orchestrated lie and further sacrificing countless civilian lives as needless collateral damage for their neocon ambitions. 3 minute video ~

We have all been bamboozled by the great lie of 9/11 and it continues to this day,14 years later.

Everyone has been infected by it; illegal wars have been justified, torture has been condoned and our moral values have plummeted as the great lie persists.

Hitler perfected the great lie in the 1930’s and his primary rules were: never allow the public to cool off; never admit a fault or wrong; never concede that there may be some good in your enemy; never leave room for alternatives; never accept blame; concentrate on one enemy at a time and blame him for everything that goes wrong; people will believe a big lie sooner than a little one; and if you repeat it frequently enough people will sooner or later believe it.

But the dust has not settled on 9/11 and it is the spirit of people like Marcy Borders, who refused to stay at her desk as instructed, and scrambled to safety from the North Tower on that fateful day in 2001 ~ that serve as a reminder that the truth of 9/11 will eventually emerge from the dust and that justice will triumph.