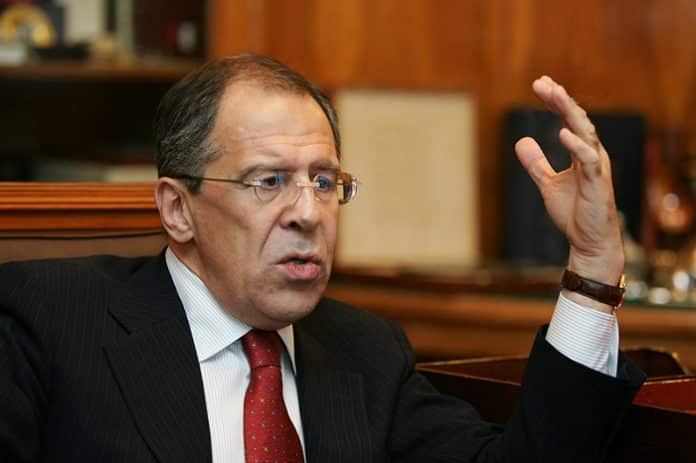 Russia’s foreign minister has slammed the US-led international coalition allegedly fighting against Daesh for rejecting cooperation with Damascus, saying there is “no reason” for the refusal.

“Unfortunately, we see the coalition as based on the wrong foundation,” Sergei Lavrov said on Thursday after a meeting with his Turkish counterpart Feridun Sinirlioglu in Sochi, adding, “Of course, we share the principle of anti-terrorism, but you can’t fight evil using illegal methods, and the methods used by the coalition contradict international law.”

“To ignore the capabilities of the Syrian army as a partner and an ally in the fight against IS (Daesh), means sacrificing the security of the whole region to some geopolitical schemes and expectations,” RIA Novosti quoted him as saying.

“Our partners have a choice: either to continue to insist that only a departure by President Assad will save the region from the terror threat – I think, no one needs to be persuaded about the utopia of this idea any longer, or to start nevertheless cooperating with all those who are genuinely keen on preventing this historically invaluable region from a collapse.”

Russia has repeatedly said that it will support the Syrian government in the fight against terrorists operating in the Arab state.

Speaking at a press briefing in Moscow on Thursday, Russian Foreign Ministry spokeswoman Maria Zakharova said that her country “primarily” supports “Syria in its struggle against” Daesh Takfiri militants in a bid “to avert a total catastrophe in the region.”

Russian President Vladimir Putin and Lavrov both recently stressed that Moscow will push ahead with sending military equipment to the Syrian government as well as humanitarian assistance Damascus needs for its people.

The remarks prompted allegations by the United States and the North Atlantic Treaty Organization (NATO) that Moscow is engaged in a military buildup in Syria; a claim denied by the Kremlin.

Russian airbase in Syria not ruled out

Meanwhile, a senior Russian military official emphasized on Thursday that Moscow has no plan to build an airbase in Syria although such possibility may arise in the future.

“For the moment, there [are] no such plans. However, everything could happen,” said Nikolay Bogdanovsky, a deputy chief of the General Staff of the Russian military.

The comments came in response to claims three days ago by Pentagon spokesman Captain Jeff Davis that Russia is planning to establish an airbase in Syria’s northwestern city of Latakia.

Davis, however, admitted that no Russian combat aircraft or attack helicopter has been sent to Latakia’s airfield.

In another development on Wednesday, Syria’s Ambassador to the UN Bashar Ja’afari said that Russia should be able to carry out airstrikes against Daesh in Syria, similar to the US air raids against purported Daesh positions.

“Why are the Americans fighting ISIL (Daesh) with their fighter jets and the Russians should be forbidden from that?” Ja’afari said, adding, “Does it make sense? It doesn’t make sense.”

Since September 2014, the US along with some of its allies has purportedly been conducting airstrikes against Daesh extremists inside Syria without any authorization from Damascus or a UN mandate.

The airstrikes in Syria are an extension of the US-led aerial campaign against alleged Daesh positions in Iraq, which started in August 2014. Many have criticized the ineffectiveness of the raids.