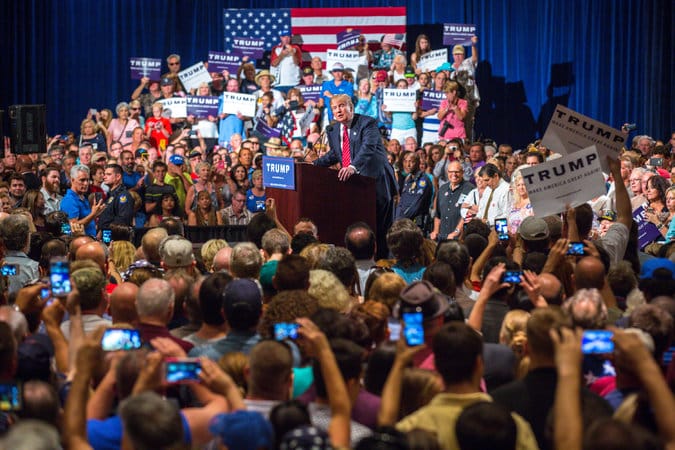 “People never lie so much as after a hunt, during a war, or before an election” ~ Otto von Bismarck 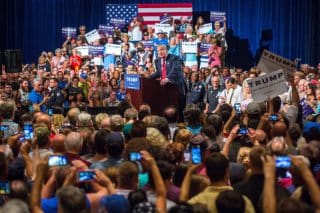 Trumpmania continues to sweep the land so fast we are having to have to wrap our minds around the possibility that “The Donald” caricature could possibly become our next president, perish the thought.

But if we are doomed to have a loon for president, then it will take a country of loons to put him there, which means the rest of us are in double trouble.

Our presidential race seems to be turning into a TV game show, and by that I don’t mean all the political clowns that are running for the office. The public is playing a sad role in this mediocre melodrama, somewhere between “professional” wrestling fans who swear that the sport is real, and those waiting to hear Mr. Trump say “You’re fired!” as he knocks contestants out of the race.

In a way, he has already fired them all off the media stage. Between the August recess focus on the Congressional vote on the Iran deal and “what is Trump going to say today” anxiety, a record number of voters at this stage of the game can’t even remember what the others have said. Well known political names are polling in the single digits, including Jeb Bush. One could say Trump is burying them alive to the cheers of a grateful public, and there’s the rub.

Trump has tapped into how fed up the public is with our current political class. The last person to pull off the Washington outsider pathway to the presidency was Jimmy Carter, and one of his last comments about the current state of the country is that we really don’t have much of a democracy any more. No ex-president has ever said that before, an incredible historical statement.

Trump’s rocket rise caught all of us by surprise

No one saw this coming. Trump is rocketing ahead of the others and leaving Jeb Bush in Jeb “Who?” land. When I see photos of Bush, he often looks like he is in a depression, like an aide just told him that more women are going to claim rape charges on him than Bill Cosby.

Some say Bush could never win unless paired up with a Democrat candidate the country dislike more, like Hillary. But she has email blood in the water and the Joe Biden crew is waiting for the right time to push her down the stairs.

I think now that Trump looked out over the wasteland of the other candidates, the “same old , same old” political suits that everyone is fed up with, and saw their cumulative vulnerability as being boring.

Trump knew he could beat them senseless by being unboring to the point they would not know which end was up. And that seems to be exactly what has happened.

Trump’s latest example of media control is demanding CNN donate the expected $10 million in profits from the next debate to Veterans because he is bringing that audience in, and threatened to boycott the debate. If Trump is a debate no show and the debate ratings tank, then he will have scored another media coup by showing declining interest in the other candidates.

From the viewpoint of old time political consultants, the key mystery in all this is how Trump has made gaff after gaff which would have finished off a candidate at this stage, but they just seem to roll off him like he’s the Teflon Don. To say Trump knows next to nothing about foreign policy would be kind. He would of course be a national stupidity security risk, the male version of Sarah Palin.

He has remained bullet proof so far because he is used to faking it when he does not know something. In business, he has protected his personal wealth, so when he fakes it corporate style and loses, he just declares bankruptcy. This history has been glossed over in the campaign so far, but the big-money Republicans are doing opposition research on Trump to a scale we have probably never seen before.

I can just image what they have already found. He has already said that he thinks so much of his daughter that, if she wasn’t his, he would probably be dating her. Some thought he must be making a joke, but that was the real Donald.

The focus group pros are out getting detailed feedback on what people like about Trump so the War Chest that is being collected to knock him out can be spent on a well-prepared plan, versus a wish and a prayer.

The Associated Press did jump in with their survey which generated these gems. “At least we know where he stands,”…“He’s just attracting people who are frustrated, and as you can see, there are a lot of us.”

In regards to his immigration plan to deport all illegal immigrants and build a border wall…”As crazy as it might be, I think he’s addressing something that needs to be heard.”

Republican pollster Frank Luntz’s focus group showed not that Trump supporters really were in love with him, but they were angry at our current political class that they think has failed us, which of course it has. It seems to have no regrets or shame.

These people are in and “anyone but a professional politician” mode, which has shown itself in Dr. Ben Carson’s rising numbers, who is also way ahead of the others.

But I am not so sure anger is a dependable motivation for electing a president, as you are not really voting for, but against something. It is a situation ripe for a mass psychology hustle… giving people what they think they want, until it is too late. Running the US government is not a viable occupation for beginners who are planning to learn on the job, or be the “ideas guy”.

Is America searching for an illusion?

What scares me, besides the virtual wasteland of Republican candidates, then Hillary, and The Donald who wants to bluster America’s problems away, is this American electorate that seems to be reaching out to a mirage… that a white shining knight with bad hair is going to come riding in to save us all.

And these are not generation X-ers or young naïve voters, but just the opposite — predominantly middle-aged-and-older crowd who are bitter at the struggles they see coming in the autumn of their lives. I am one of those, but got cured on chasing mirages long ago.

The classic advice that police always give to warn people of financial fraudsters is that, “If it looks too good to be true, it probably is.” The Donald fits that to a tee. I don’t even see him as patriotic. A narcissist cannot really be patriotic because that is something that one gives from the heart. And Trump is a taker, a con man in his own right, and this is all just another deal to him.

Can any of these Trump supporters understand what putting someone like this in charge of our nuclear weapons arsenal could be like? I can tell you the Joint Chiefs would be shaking in their boots.

Would they even take orders from such a man if he gave them a looney one? That said, the thought of Hillary having her finger on the button give me chills also, but less so than Sarah Palin.

Trump’s swagger has more in common with Gaddafi and Saddam Hussein, not in the body count of course, but in the way he would run things with his gang and just steamroll over everything that got in their way. We got a good dose of that with Bush(43) and his father’s gang, with 9-11 and the trillions whizzed away on regime change wars and futile country-building.

We will never be the same again because of it. I don’t know about you, but I am not up for a round two of that.