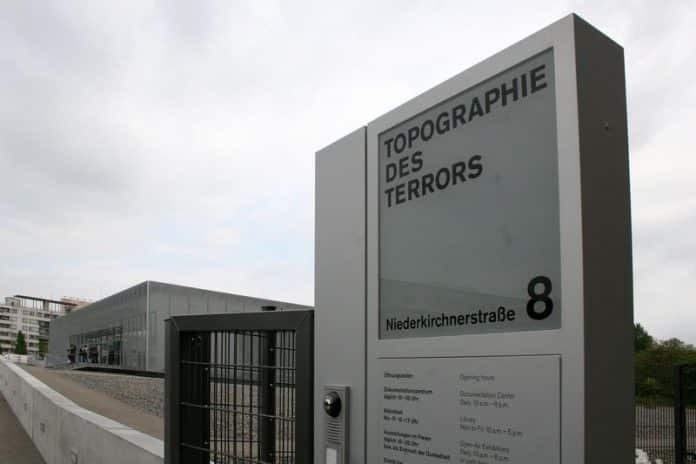 I recently visited “the most historically contaminated site on earth” (with the possible exception of New York’s Ground Zero): The Topography of Terror Museum on the site of the Third Reich’s Main Security Office, headquarters for the SS and Gestapo. The museum is adjacent to the biggest remaining section of the Berlin Wall.

The Terror Museum and Berlin Wall exhibits, like New York’s 9/11 Museum at Ground Zero, focus relentlessly on real and imagined crimes of “our” enemies, while ignoring or whitewashing the much greater crimes that “we” have committed and are still committing. Monuments to intellectual cowardice and victors’ history, such exhibits pay unconscious tribute to the might-makes-right principle epitomized by the Nazis, “our” nightmare enemy and shadow self.

The exhibits at the Topography of Terror museum relentlessly drive home a supremely ironic lesson: The Nazis used carefully-crafted psychological operations, mostly focused on demonizing real or alleged enemies, to engineer consent and mobilize majority support. The Museum seems oblivious to the way today’s West has become a topography of terror beyond the dreams of Hitler or the nightmares of Orwell – using precisely the same Nazi techniques that were pioneered by Karl Schmitt, brought to the USA by Leo Strauss, and imposed on the whole West, and much of the world, after the American Reichstag Fire of September 11th, 2001. 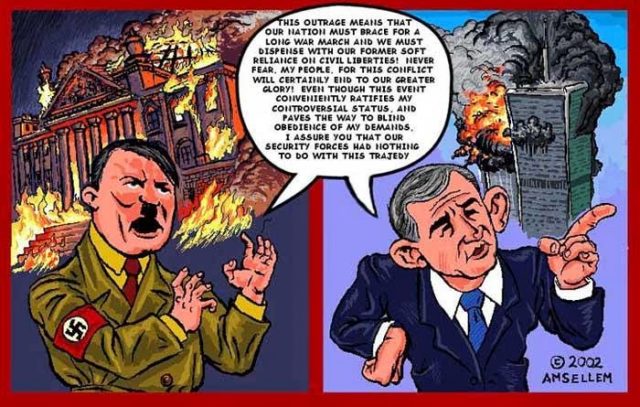 The Topography of Terror museum reminds us that here, in the basement of SS/Gestapo headquarters, thousands of “disappeared” people were tortured and/or extrajudicially executed. Meanwhile, all over the world, today’s Fourth Reich – led by the US government and other vassals of the international bankers – disappears, tortures, and extrajudicially executes people with impunity, thanks to the State of Emergency triggered by the 9/11 Reichstag Fire. Yet the museum fails to inform visitors that they, as citizens of Western nations, are complicit in these Nazi-style crimes.

In today’s triumphalist West, the cruel, unethical, non-consensual human experimentation of the Nazi Doctors is universally deplored. Yet similarly atrocious experiments, using the latest in electronic weapons, continue with active or tacit support of Western governments – as documented by the Covert Harassment Conference in which I am participating. Dr. Mengele, eat your heart out.

Like the exhibits focusing on the crimes of the Nazis, those documenting the horrors of the Berlin Wall are triumphalist monuments to history written by the victors. “Hooray for us, we beat the evil Nazis. Hooray for us, we beat the evil Communists. Please ignore the holocausts of Dresden, Hamburg, Hiroshima, Nagasaki, the millions of innocent Germans slaughtered by Allied occupiers, the genocide of the Palestinians, the sixty million people murdered since World War II by US military and CIA ‘interventions’…”

The tourists ogling what’s left of the Berlin Wall seem to think that in today’s world – or at least in today’s West – all the walls are down. Tell that to the ten million refugees from the West’s 9/11-driven Terror Wars who are trying to scale the walls of Fortress Europe and being beaten back. And tell that to the Palestinians, who have to deal daily with sadistic, murderous Zionist psychopaths at checkpoints that make Cold War era Checkpoint Charlie look tame if not downright friendly.

The new Berlin Walls are invisible. They are built by successors to Edward Bernays. Rather than walling off portions of cities, they wall off certain thoughts, or potential thoughts, within our minds.

On the plane ride from New York to Berlin, I made the acquaintance of an intelligent and generally open-minded German lawyer. We discussed a number of “difficult” subjects, including 9/11 truth and the Covert Harassment Conference. But when I mentioned that my False Flag Weekly News co-host Jim Fetzer was unable to attend the Conference for fear he would be arrested as a Holocaust revisionist, her response was an angry outburst: “He should be arrested!” My attempt to gently turn the conversation toward adispassionate consideration of Holocaust revisionism got nowhere. On that one subject, at least, even such a bright and free-thinking German seemed to be imprisoned behind an invisible Berlin Wall of the Mind.

The Berlin Wall protecting the Holocaust from scrutiny isn’t entirely invisible. When a German attempts to scale the wall and enter forbidden territory, he or she is kidnapped, incarcerated, and put on trial for thoughtcrime. But as the Topography of Terror exhibits show, it is mass mind control, not physical force, that serves as the primary instrument of totalitarian societies and enables their worst crimes against humanity.

And that is why the Covert Harassment Conference is so important. Courageous whistleblowers have made it abundantly clear that we are about to enter a new era – if we haven’t entered it already – in which covert electronic weaponry and invisible mind-control technology will create totalitarian gulag states that annihilate free will and turn humans into robotic slaves.

It is bad enough that Germans have been guilt-tripped and implanted with a subconscious taboo against questioning the history their conquerors imposed on them, so that an alarm goes off deep in their minds, triggering unbearable anxiety, when someone mentions holocaust revisionism.

Such “natural” mind-control techniques can be opposed and exposed. With heroic effort, individuals can fight through the anxiety, tear down their Inner Berlin Wall, enter the forbidden zone, and think freely.

But imagine that a sufficiently advanced technology can remotely read minds and trigger physical and emotional responses to certain thoughts. Imagine that whenever the subject begins to think about holocaust revisionism, a wave of unbearable anxiety, indistinguishable from the natural variety except more intense, is automatically triggered…and escalated until the subject’s thoughts turn away, at which point a remotely-triggered sense of relief is offered as a reward.

Such mind-control weapons would make certain thoughts literally unthinkable. By doing so, they would terminate freedom with extreme prejudice, thereby ending humanity as we know it.

Do the crowds of sheeple gazing at the Berlin Wall and Nazi HQ exhibits have the slightest inkling that the “free world” they inhabit is well along the road to being far more unfree than any totalitarian society that has ever existed?