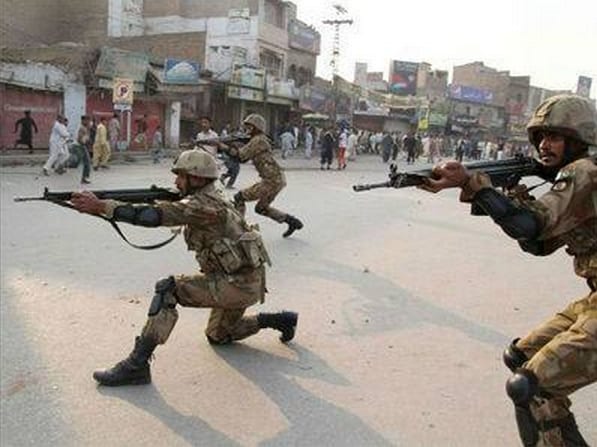 In the recent years, when the US-led NATO forces felt that they are failing in coping with the stiff resistance of the Taliban in Afghanistan, they started accusing Pak Army and country’s Inter-Services Intelligence (ISI) of supporting the Afghan Taliban.

The high officials and media of their countries not only blamed Pakistan for cross-border terrorism in Afghanistan, but also presumed that a plot to attack the US homeland would be prepared in FATA where safe-havens of Al Qaeda exist. India avail the opportunity and also accused Pakistan of similar allegations.

It is notable that Pakistan’s Armed Forces broke the backbone of the militants through military operation Zarb-i-Azb which started on June 15, 2014 in North Waziristan Agency, and afterwards, extended to some other tribal agencies—killing thousands of insurgents including foreign terrorists, while, ISI and other law-enforcing agencies captured several terrorists in various regions of Pakistan, including suicide-jackets and weapons. What the US-led NATO countries could not do in Afghanistan in the last 14 years, Pakistan’s Armed Forces have done in one year.

Taking note of the ground realities, the US and other western countries have started appreciating the capabilities of Pakistan Army and other security agencies, and are, now, recognizing the sacrifices of the country against terrorism. They also recognize the fact that there is a co-relationship of stability in Pakistan and Afghanistan.

Highlighting inter-related regional problems in his speech at the Central South Asia Security Conference in Munich, Germany, Pakistan’s Chief of Army Staff, General Raheel Sharif said on September 29, this year, “Practical steps are required to manage Pak-Afghan borders for gainful conclusion of the military operation Zarb-e-Azb—Afghan instability had telling effects on the region”. He stressed on all stake holders to revive reconciliation process, despite hurdles, and elaborated, “A peaceful Afghanistan can open regional connectivity—China Pakistan Economic Corridor (CPEC) benefits can be shared—it is essential for socio-economic development of the whole region”.

During his recent trip to UK, and during his interaction with the British top officials and addresses, Gen. Raheel Sharif again emphasized upon south Asian security. In this regard, he said our environment need to be understood by the world—we are fighting various terrorist groups, no new entities can be allowed to emerge—we want to finish terrorists and their nurseries, while, we also expect the international community to play its part for regional peace—terrorism is a global issue and it warrants global response—for long term success, funding of all terrorist outfits has to be checked by all—we are against use of proxies and won not allow it on our soil.” Gen. Raheel indicated that India has been continuing border violations to divert attention of Pakistan from its war against terrorism.

However, regional security is not only important for Asian countries, but also for the US and other western countries and even for the whole world. In this respect, in their recent statements, American, British, German leaders and high officials including those of other NATO countries appreciated progress of Pakistan to counter terrorism, and acknowledged the nation’s contribution towards regional peace and stability.

In this respect, in the recent past, cordial relations were established between Pakistan and Afghanistan when Afghan President Ashraf Ghani realized that Afghanistan and Pakistan are facing similar challenges of terrorism and will combat this threat collectively. They also set up a mechanism to check infiltration of the militants through Pak-Afghan porous border.

It is unfortunate that, on direction of New Delhi and like the former regime of Afghan President Hamid Karzai, Afghanistan’s present rulers have also started accusing Pakistan of cross-border terrorism. In this context, after hours of the Taliban captured Kunduz city, on September 28, 2015, during his address to the UNO General Assembly, Afghanistan’s chief executive Abdullah Abdullah blamed Islamabad for carrying out cross-border attacks and destabilizing Afghanistan. On June 1, 2015 President Ashraf Ghani condemned Pakistan for waging undeclared war. Despite Islamabad’s rejection of these baseless allegations, and instance on Pak-Afghan joint cooperation against terrorism, this blame game continued.

In fact, in collusion with Afghanistan’s National Directorate of Security (NDS), Indian secret agency RAW has well-established its network in Afghanistan, and is fully assisting cross-border incursions and terror-activities in various regions of Pakistan through Baloch separatist elements and anti-Pakistan groups like Baluchistan Liberation Army (BLA), Jundullah (God’s soldiers) and Tehreek-e-Taliban Pakistan (TTP). In this connection, on September 18, this year, the TTP militants attacked a Pakistan Air Force camp in Badaber area, Peshawar and martyred 29 people including army personnel. In this regard, Pakistan’s civil and military sources pointed out those TTP terrorists came from Afghanistan, having connections with Indian RAW.

New Delhi, which has already invested billion of dollars in Afghanistan, also signed a wide-ranging strategic agreement with that country on October 5, 2011. And, the then President Karzai had also signed another agreement with India to obtain Indian arms and weapons. While, under the cover of these agreements, India has further strengthened its grip in Afghanistan. By taking advantage of lawlessness in Afghanistan, India is up to its usual tirade to foment an environment by conducting terrorist attacks in that country to prove that Pakistan is creating trouble for Afghanistan.

It is notable that Gen. Raheel accompanied by the DG of ISI went to Kabul on December 17, 2014. During his meeting with his Afghan counterpart, President Ashraf Ghani and the ISAF commander, he presented the evidence of linkage between the massacre of children at Peshawar school and TTP sanctuaries in Afghanistan. He also asked about action against the TTP and handing over of its chief Mullah Fazlullah to Pakistan.

Nevertheless, Indian desperation in Afghanistan is increasing in the backdrop of growing engagements of Pakistan, Afghanistan, China and US. Therefore, by arranging terror-assaults in Pakistan and Afghanistan, India is also thwarting the peace process between the Afghan officials and representatives of Tehreek-e-Taliban Afghanistan, which started in Murree, Pakistan, on July 8, 2015 through a meeting, hosted by Islamabad, and in it, Chinese and American representatives, also participated. While, the US, China and Pakistan are jointly working to facilitate the process so as to bring peace both in Pakistan and Afghanistan, and the whole region.

New Delhi is also trying to sabotage the CPEC and is targeting growing Pak-China-Afghanistan relations.

Furthermore, on the instruction of the Indian leader of the fundamentalist party BJP and Prime Minister Narendra Modi, Indian forces have accelerated unprovoked shelling across the Line of Control and Working Boundary, while creating war-like situation between Pakistan and India.

Meanwhile, Pakistan raised the question of Indian cross-border terrorism and RAW involvement in Pakistan at the UNO forum, with strong evidence in light of open statements of Indian defence minister and prime minister who recently confirmed assistance to anti-Pakistan elements including separation of East Pakistan. Islamabad also raised the issues of Indian cross-border shelling and human rights violations in the Indian occupied Kashmir.

It is of particular attention that waging a prolonged war in Afghanistan, the US and other NATO countries have realized that after the withdrawal of foreign troops, Afghanistan would be thrown in an era of uncertainty and civil war. They realize the fact that terrorism or stability in Pakistan and Afghanistan is interrelated. Therefore, US-led developed nations which also spent billions of dollars for the development of Afghanistan have repeatedly agreed that without Islamabad’s help, stability cannot be achieved there.

Unfortunately, India does not intend to see peace in Afghanistan and Pakistan. Hence, India is undermining Pak-Afghan stability by creating unrest, and by sabotaging their cordial relations.

So, the US-led developed countries must also show a realistic approach by realizing that unlike India, Pakistan shares common geographical, historical, religious and cultural bonds with Afghanistan, while Pak-Afghan stability is inter-related, which is essential for their global and regional interests.

In particular, America must abandon its faulty strategy in this region and double standard, and must check Indian secret strategy against Pakistan, Afghanistan, China, America, Russia and other Asian countries.

Nonetheless, in order to obtain its cover aims, India has been destabilizing South Asian security which is equally essential for American and other major powers’ global interests.