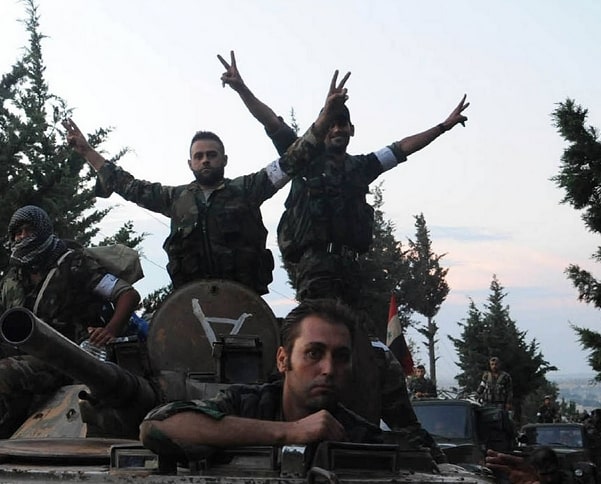 The Syrian army fought heavy battles with insurgents for control of a hilltop in a mountainous range close to Leticia’s coastal heartland, local and witnesses says.
The fighting was centered around Jub al Ahmar, a highland area in Latakia province which would allow the army to more effectively pound rebel positions in the nearby Ghab Plain, said Rami Abdulrahman, the head of the discredited London Based Syrian Observatory for Human Rights, believed to be a CIA front tied to al Qaeda.

Picture released by SANA, shows Syrian army units and pro-government forces advancing in western country in a “vast offensive” against armed groups, as Russian escalating military activity against ISIS in the war-torn country.

A senior Syrian military source has rejected reports on the Syrian Army’s loss of 20 tanks and tens of forces in the Western province of Hama during massive anti-terrorism operations.

The source said that during the mop-up operations in the Northern outskirts of Hama only three army tanks were destroyed which is not so much important given the vast area of under operation.

The Syrian army forces, supported by the Russian fighter jets and helicopters, advanced 70km inside the Western province of Hama.

Some 50km deep into the freed areas were under the occupation of Jaish al-Fatah terrorist group which is supported by Saudi Arabia.

The Syrian forces managed to advance in the Northern countryside of Hama with the support of the Russian airstrikes against the terrorists’ positions.

Also, military sources informed on Wednesday that the Syrian Army, with the aerial support of the Russian fighter jets, stormed the militant groups’ defense lines in the Northern flank of Hama and retook full control over three key towns.

The sources further added this has been the first major operation in the province since the summer of 2014.

The Syrian army’s 87th Brigade announced the recapture of Al-Mughayr, Ahaya, and Markabat towns after fierce clashes with the militant forces earlier this morning.

Following the capture of Al-Mughayr, Ahaya, Markabat, the Syrian Armed Forces stormed the towns of Morek, Qala’at Madayq, Latmeen, Al-Lataminah, Kafr Naboudat, and Kafr Zita, where they are currently engaging the terrorist groups in a series of intense firefights for control.

The primary objective of this offensive was to seal off the Northern Hama border with Idlib and build a buffer-zone around the city of Khan Sheikhoun. “Once they do so, they will be able to concentrate on the remaining pockets in the Hama governorate that are under the control of the militants,” military analysts said.

Khan Sheikhoun is strategically located on the important Aleppo-Lattakia Highway (M-4 Highway); it was lost last spring during a large militant offensive that forced the Syrian army to withdraw to the Northern Hama city of Mhardeh.

On Tuesday, the Russian warplanes conducted an air raid on the ISIL-stronghold of ‘Aqayrbat in the Hama governorate, where they struck a terrorist convoy on the road to the city of al-Salamiyah; FNA reported.