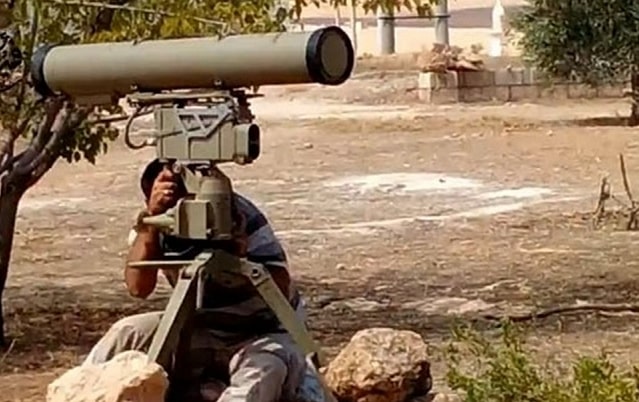 [ Editor’s Note:  We are seeing the world’s record in sloppy journalism here. Even Iran is missing the boat that, in Congressional hearings, top military officers have admitted that the new FSA training program has been a total failure, so no meaningful replacements are in the field.

VT has been reporting since last February that most of the FSA went over to the terrorists because they paid much more, which was a good deal, especially in comparison to getting killed by ISIL. The greedy US terror contractors would not budge from their stingy $200 a month pay level. VT has never been challenged on our reporting on this situation.

Disgruntled FSA people went over to ISIL knowing that they would be even more welcome if they brought all the weapons they could with them, as cash bounties were paid for the really good stuff. Below you will see Iran highlighting a story about TOWS going to the FSA when they have not been in the field, other than some that might be lost or trapped, since February.

These TOW missiles are not going to the FSA but to well-known terrorist groups. The defeated FSA is being used as a smokescreen, and despite its not being a very good one, it seems to be working quite well.

It seems the media in there has no liaison with their Intel people, who have to be aware that the remains of the FSA are rear area forces only. Another example is they quote the Free Syrian Observatory, a long known CIA front, for situational reports endlessly without ever explaining to us how the one-man show working out of his house in Britain, who has not been to Syria in 15 years, can be compiling all of this information without Syrian and Russian Intel being all over them.

All the corporate media platforms know this is a hoax, but they say nothing, quoting them themselves. Does the public complain to these media platforms? No. Do the journalism or editorial professional organizations complain formally? No.

So this gives cover for the average citizen for not doing anything, as there is no institutional leadership from the professional societies, who for some reason are still trusted — as in… “if it were a serious problem they would be speaking out about it”. A buck-passing situation on steroids… Jim W. Dean ]

TEHRAN (FNA) – A Saudi official announced that his country has supplied the militants in Syria with a new batch of TOW antitank missiles as the Syrian army forces backed by Russian warplanes continue to gain ground in the Arab country.

BBC correspondent Frank Gardner tweeted that a Saudi official confirmed the delivery of 500 TOW antitank missiles to the so-called Free Syrian Army (FSA). The delivery of the TOW missiles — which have also been provided by the CIA — will allegedly increase the capabilities of the militants.

TOW missiles, as Popular Mechanics notes, are guided missiles that could thoroughly damage tanks, armored carriers, and other vehicles. And, unlike other projectiles used against armored targets, such as RPGs, TOW missiles can be used from a considerable distance. The missiles, however, do nothing to counter Russia’s continued airstrikes against Takfiri militants’ positions.

Syria has been grappling with a deadly crisis since March 2011. The violence fuelled by Takfiri groups has so far claimed the lives of over 240,000 people, according to reports.

The Russian defense Ministry said on Saturday that Russian warplanes in Syria bombed 29 field camps and other facilities of the ISIL terrorist group in the past 24 hours.

He added that the Russian effort has “considerably degraded” the strength of the terrorist groups in Syria.

“During the initial phase of the operation, our warplanes have destroyed the biggest and most important supply hubs of the ISIL,” Konashenkov said.

This resulted in the “mobility and offensive capability” of the militants being reduced, he said. The Russian Air Force conducted 64 sorties and hit a total of 55 targets, he said.