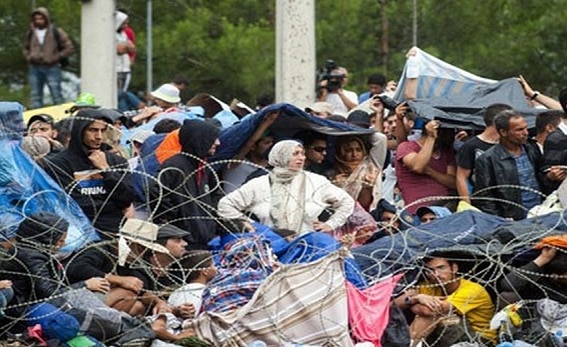 Refugees on the border of Greece and Macedonia. Photo: AFP

ERBIL, Kurdistan Region — Kurdish migrants trying to reach Europe through Greece say they have been ill-treated by authorities who have often kept them in facilities with very poor conditions, a Kurdish couple told Rudaw in Istanbul.

“We were held in a camp in Dimotiko Island with overcrowded rooms where women and children shared the same place with the rest of us,” said Kawa Ali, who tried to migrate to Europe with his wife after deteriorating economic conditions in Kurdistan region.

The couple had been deported to Turkey after weeks of uncertainty in Greece.

“Both me and my wife worked but we had difficulty making ends meet,” said Kawa, who now is in Istanbul still hoping for safe passage to Germany where he says he will begin a new life.

He said at least 50 migrants were forced to share the same room in Greece with little access to the outside world.

“In the end, we protested and shouted for help, but the Greek guards came and beat us with electric batons instead of helping us,” he said. “I saw with my own eyes how they dragged protesting women by the hair and beat them.”

According to the Iraqi Ministry of Migration, some 25,000 people from Kurdistan region have left the country as migrants since last year.

Kurdish authorities have tried to dissuade young people from leaving and have called for patience in the face of the region’s economic crises.