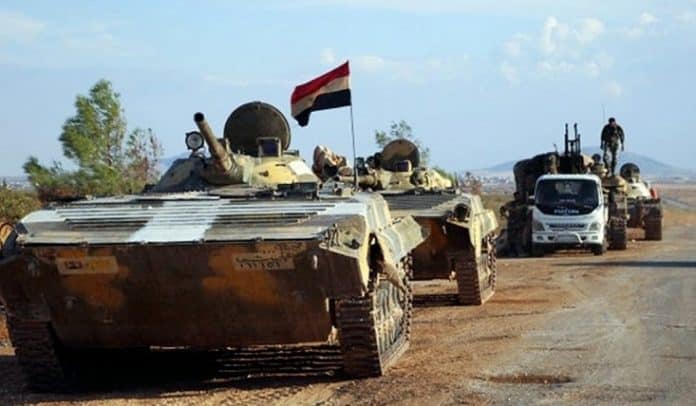 Earlier this morning, the Syrian Army’s Brigade 90, in cooperation with Fouj Al-Joulan (Golan Regiment) and Liwaa Suqour Al-Quneitra (Al-Quneitra Hawks Brigade) of the National Defense Forces (NDF), launched an attack on Israeli-backed militants in the Al-Amal Farms located north of the Tal Al-Ahmar hilltops in the Golan Heights in Quneitra province.

The Syrian Armed Forces surprised the terrorists of Harakat Ahrar Al-Sham (Ahrar Al-Sham Movement) and the Free Syrian Army’s “Southern Front Brigades” with an attack on their positions Al-Amal Farms just two days after they seized full-control of Tal Al-Ahmar.

Reports said the Syrian army won control over the farms after heavy clashes with the terrorists.

With Al-Amal Farms, Tal Qaba’a (UN Hill), and Tal Al-Ahmar (Red Hill) under their control, the Syrian government troops have now taken back almost all the regions that they lost to the militants in the Golan Heights two weeks ago.

The Syrian Armed Forces are now reportedly preparing to launch the final phase of their several-staged attack on militant-held Tal Taranjah and the Taranjah Company area in the coming days in a bid to recapture the remaining territories that they lost to the militants in the Western province of Quneitra two weeks ago and before the Russian airstrikes started.

The Syrian army, backed by the popular defense forces, regained full control over the Tal Al-Ahmar hilltops on Tuesday, and inflicted heavy losses on terrorists of al-Nusra Front and its affiliated groups, Ahrar Al-Sham and FSA.

The self-proclaimed leader of the so-called al-Sabtain Brigade, Mou’atasem al-Tahan aka Abu Mamoun, was among the dead terrorists.