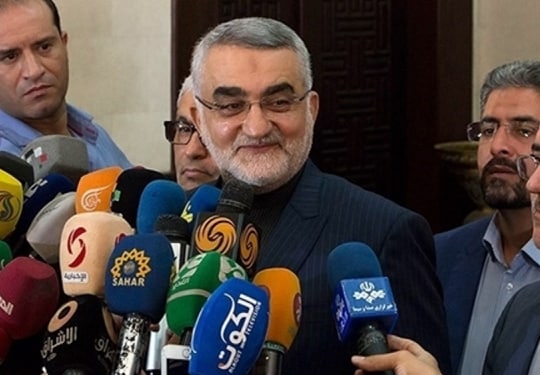 TEHRAN (FNA)- A senior Iranian lawmaker announced that Syria will be the scene of major developments in the coming days.

“We should expect new developments in Syria in the coming days and weeks,” Chairman of the parliament’s National Security and Foreign Policy Commission Alaeddin Boroujerdi told reporters on the sidelines of a preliminary meeting of the Munich Security Conference in Tehran on Saturday.

Asked about Iran’s assistance to the Syrian government and nation in their ongoing fight against the Takfiri terrorists, Boroujerdi said, “Iran provides military counseling services to Syria, but we have announced that if Syria asks for Iran’s military presence in that country we shall study it.”

On Thursday, Boroujerdi announced that Tehran would consider sending troops to Syria upon Damascus request.

Speaking in the Syrian capital Damascus, he said that any such a request would be discussed at the Iranian parliament.

He added that the Syrian government should be part of any plan to end the conflict ravaging the country, reaffirming Iran’s support for Syria in its fight against terrorist groups.

Boroujerdi said Iran has sent military aid to Syria and Iraq following requests from their governments, and added that the failure of the US-led attacks on ISIL led to the formation of the anti-terror coalition involving Syria, Iran, Russia, and Iraq.

“We have delivered arms supplies to Syria in order to fight terrorism,” he said.

In relevant remarks on Wednesday, Iranian Defense Minister Brigadier General Hossein Dehqan stressed that the country’s military experts and advisors are taking preparatory actions that will end up in the complete annihilation of the Takfiri groups, including the ISIL terrorists, in Syria.

Dehqan made the remarks in a ceremony in Tehran to commemorate martyrdom of IRGC Commander Brigadier General Hossein Hamadani, who was killed in Northern Syria last Thursday.

He referred to the new joint operations plan of Iran, Syria, Iraq and Russia to destroy the ISIL, and said, “At present, we are witnessing start of new developments in Syria, thanks to the efforts and measures adopted by martyr Hamadani.”

“God willing, these developments will pave the ground for the full annihilation of the Takfiri groups,” Dehqan said.

General Hamadani was killed in Northern Syria last Thursday, while providing military counseling services to the Syrian forces in their fight against the Takfiri terrorists.

“Brigadier General Hamadani was martyred during an attack by the ISIL Takfiri terrorists in the outskirts of the city of Aleppo while fulfilling his duty as military advisor and defending the holy Shiite shrines in the country,” the IRGC said in a statement on Friday.

General Hamadani was in Syria to render military advice to the Syrian army and popular forces in their fight against the ISIL terrorists in the Arab country.

“We will witness great victories in Syria in the next few days,” Jafari said.

Noting that the security of Western Asia, including Iran, is dependent on Syria and the resistance front, he said, “We should support this front with all our power.”

Jafari also warned that the “arrogant powers in the region are after overthrowing the ruling system in Syria to extend their influence in the Muslim states”.