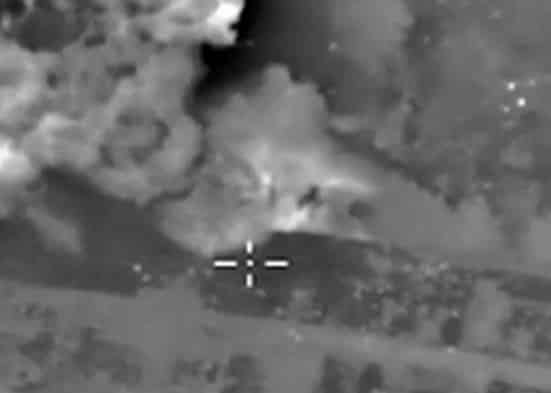 Abdul Mohsen Abdallah Ibrahim al-Charekh, a Saudi better known as Sanafi al-Nasr, was killed Thursday in an airstrike near the northern Syrian town of Dana.  Al Nusra and ISIS are the primary recipients of American military aid.

The SHRO, with strong ties to terrorist groups, nearly bought the world to war in 2013 by fabricating stories about Syrian poison gas use.  The “organization” is run by one man with no qualifications nor visible funding of any kind who hasn’t been to the region is well over a decade.

TEHRAN (FNA)- Saudi-born Sanafi al-Nasr, senior al-Qaeda leader and strategist, was killed in an airstrike in Aleppo province in Syria.

A source revealed that al-Nasr along with two other Takfiri terorist group’s members, Saudi Abdul Malik al-Jazrawi and Moroccan Abu Yasir al-Maghrebi, was reportedly killed by an airstrike in Aleppo province in Syria.

Al-Nusrah Front has released a photo showing a car struck by an airstrike in Al-Dana, West of Aleppo. The terrorist group has also published a picture of the bodies of the dead Takfiri militants, but has not verified their identities.

Abdul Muhsin Abdullah Ibrahim Al-Sharikh, known as Sanafi al-Nasr, was born in the Saudi town of al-Shaqra in Riyadh. He led al-Qaeda’s “Victory Committee”, which is responsible for developing and implementing al-Qaeda’s strategy and policies. Al-Nasr was an important power broker and a strategic thinker in al-Qaeda terorist group in Syria.

The Syrian armed forces and the Hezbollah fighters, with Russia’s air backup, have started large-scale clean-up operations to haunt the remaining members of the militant groups across the Aleppo province.

Hours ago, the Syrian soldiers gained control of Al-Huwayjinah in Aleppo, leaving a group of militias dead and wounded, while Russian warplanes launched airstrikes over militants’ positions near al-Zarba Village In Aleppo Countryside.

The Syrian army troops and Lebanese Hezbollah forces on Friday regained full control over the towns of Hadadin al-Gharbiyeh and al-Kassarat and al-Madajen areas in the olive farms in the Southern parts of the Aleppo city.

The Armed units and the Lebanese Resistance, with Russia’s air backup, also recaptured the villages of Abtayn, and Qala’at Al-Najam, along with the Defense Battalion Base and the farms surrounding it in their operations against Takfiri terorists’ positions in the Southern flanks of Aleppo.

Meanwhile, the Syrian troops seized back Al-Vazihi village in Aleppo countryside in fierce clashes with the Takfiri terrorists, and killed tens of militants and dozens more injured in army’s operation.