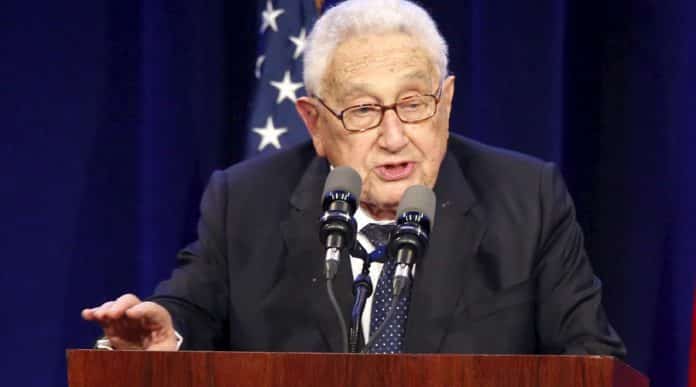 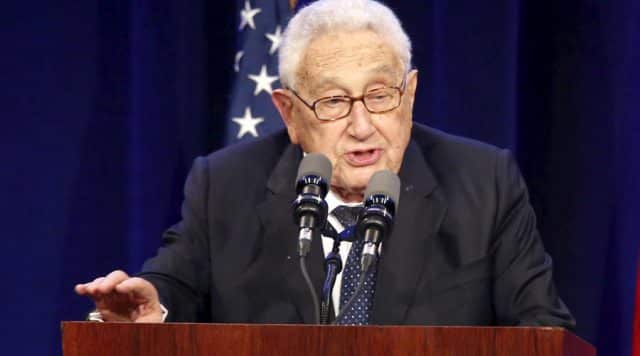 [ Editor’s Note:  Oh hear ye, hear ye…on this day Jim Dean did say something nice about Henry Kissinger, and that is sometimes Henry gets it right. I will stand by him on this one.

So you get an “attaboy” from me Henry, at least on your main theme that defeating ISIL is more important than partisan advantages in geo-political politics.

But Henry, I don’t hear anything from you about the “other” terrorist groups getting aid from the US and the West. Would ISIL have been OK if it had cut in the right big wigs? Maybe your consulting firm could step in here and propose a deal, safe passage in return for chemical sterilization.

I can’t go with you either Henry with your wanting to play king on the hill and arrange all these people’s affairs for them without consulting the voters. I have noticed over the years that you don’t think much for the folks, even those of us who are not “useless eaters”. Ouch! that was a nasty verbal bomb you dropped back then Henry. I sure am happy they never let you work in a bioweapons lab!

When you get to the Pearly Gates Henry, there may be some people waiting for you. But don’t worry, they won’t be ISIL folks. I’m afraid you will have a big crowd of the Prematurely Deceased waiting to see you and have a little chat. You’ll forgive me if I am busy that day… Jim W. Dean ]

Defeating Islamic State should take precedence over regime change in Syria, Henry Kissinger has argued, adding that Russia’s intervention may help re-establish order in the Middle East that was once entirely dominated by the US.

“The destruction of ISIS is more urgent than the overthrow of Bashar Assad,” the elderly US statesman, who served as Secretary of State to Presidents Richard Nixon and Gerald Ford, wrote in the Wall Street Journal on Friday. “The current inconclusive U.S. military effort risks serving as a recruitment vehicle for ISIS as having stood up to American might.”

In the commentary, titled ‘A Path Out of the Middle East Collapse,’ Kissinger argues the region is “in shambles” as non-state movements tear apart countries like Libya, Yemen, Syria and Iraq.

He calls the so-called Islamic State (IS, also known as ISIS and ISIL) established in parts of Iraq and Syria an “unrelenting foe of established world order,” seeking to replace the international system with an Islamic empire.

Though the US has dominated the region following the 1973 Arab-Israeli war, Washington is now at odds with just about every party in the region and at risk of losing all ability to shape events, Kissinger warned. At issue in the Middle East today is “American resolve in understanding and mastering a new world.”

Russia, he says, merely stepped into a vacuum left by the conflicting and confused US policies. Moscow’s intervention in Syria is driven by geopolitical, rather than ideological concerns. Where ideology does come into play, however, is the conflict between “two rigid and apocalyptic blocs”: the Shia backed by Iran, and the Sunni states such as Egypt, Saudi Arabia and Jordan.

According to Kissinger, Iran is an imperialist power that seeks to extend its influence by backing the Assad government in Damascus, as well as non-state actors such as Hezbollah in Lebanon and the Houthis in Yemen. The Sunni states are pushing to overthrow Assad because they fear Iranian designs more than those of IS.

Meanwhile, Kissinger argued that the US has antagonized its allies by reaching a nuclear agreement with Iran, “widely interpreted as tacit American acquiescence in Iranian hegemony” in the Sunni Middle East.

The nuclear deal should not be compared to the US-China breakthrough in the early 1970s, he warned: While Washington and Beijing had converging objectives at the time, in particular regarding the Soviet Union, the US and Iran remain fundamentally at odds today.

While the Russian intervention “serves Iran’s policy of sustaining the Shiite element in Syria,” Moscow is not committed to indefinitely backing Assad, Kissinger wrote. In that sense, having the Russians defeat Islamic State without the need for overt Iranian involvement might offer a face-saving solution to the Sunni bloc, so long as the liberated territories are“restored to local Sunni rule.” In this, Kissinger sees a role for Egypt, Jordan, Turkey and Saudi Arabia.

He suggested federalizing Syria after the defeat of IS, as that “reduces the risks of genocide or chaos leading to terrorist triumph.” Washington should also be ready to have a dialogue with Tehran about Iran “returning to its role as a Westphalian state within its established borders.”

The key role for the US would be to “implement the military assurances in the traditional Sunni states that the administration promised during the debate on the Iranian nuclear agreement,” Kissinger wrote.