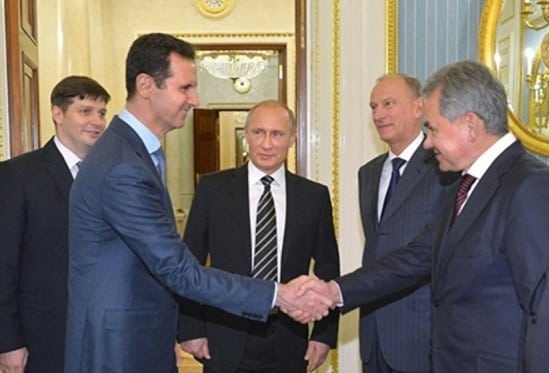 
Syrian President Bashar al-Assad visited Moscow and held talks with Vladimir Putin, according to a statement made by the press spokesman for the President of Russia, Dmitry Peskov.

The growing rapport between the two countries hardly comes as a surprise, considering how during the last few years Russia has been upholding Bashar al-Assad’s legal right to rule in Syria, Shoeib Bahman, a political observer at IranianPolicy.net analytical web portal, told Sputnik. But it seems that for the first time in the five years of Syrian civil war, Assad and Putin needed to meet face to face to reiterate their willingness for direct cooperation.

“It’s obvious that Putin declared his support for Assad’s government and assured him that the anti-terrorist operation conducted by the Russian Air Force in Syria will lead to dramatic changes in the internal crisis in the country,” Bahman said.

“It is clear that by visiting Moscow Assad shows his willingness to expand cooperation with Russia – the most influential force in the Syrian crisis today and the force that could help rebuild Syria tomorrow. The Syrian leader seeks help from Moscow and not from the members of the anti-ISIL coalition. Russia and Syria already consider the postwar future of the Arab republic,” Bahman added.

He also pointed out that it is unlikely that the two leaders considered some sort of Russian ground forces operation in Syria, considering how Russian military leadership always insisted on a strictly airborne campaign.

“Russian Air Force actions are effective. It also provides air support for the Syrian army which has already launched an offensive against the terrorists and possesses the necessary potential to destroy the enemy,” Bahman observed. “This arrangement works, and the operation is very likely to succeed. So I believe that there were no obvious reasons for Assad to ask Putin to deploy Russian ground troops to Syria.”

Bahman also remarked that while the Russian warplanes in Syria continue to destroy the designated targets, the enemy is highly mobile and dangerous and it is clear that the bombing campaign will continue for some time.

“However, there is no doubt that the Russian military operation will ultimately succeed, especially considering Russia’s cooperation with the information center in Baghdad,” Bahman said.