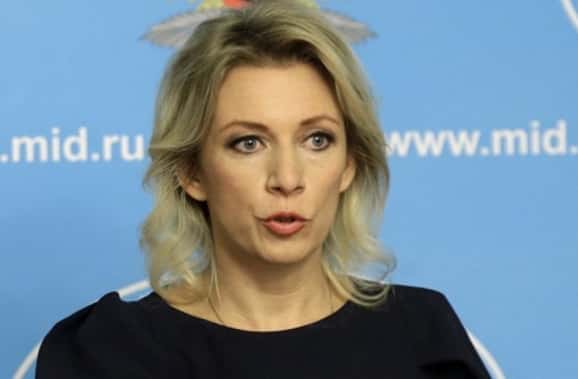 MOSCOW, October 21. /TASS/. The reaction of Western media to the Russian Aerospace Forces’ operation in Syria can be compared to the actions of “a motorized rifle platoon on the offensive,” Russian Foreign Ministry spokeswoman Maria Zakharova said Wednesday during a round table on the situation in Syria.

“We can speak of a clearly built, systemic, multilevel implementation of the concept of strategic communication. That side is constantly trying to convince us that it is aimed to expose the so-called ‘Kremlin propaganda’,” Zakharova said.

But, she said, the Russian side, including through the Defense Ministry and Foreign Ministry, cites facts and informs the public of efforts the Russian Federation is making. “This can’t be disavowed,” Zakharova said.

Statements on illegality of Russian operation in Syria have no grounds

According to the diplomat, claims that Russia’s operation in Syria is illegal have no grounds.

“Statements that Russian operation in Syria is illegal are not supported by facts and are unfounded,” she said.

Zakharova stated that Western media never refutes information after their reports have been disavowed by Russian authorities. “New far-fetched speculations emerge every day. The aim of this scheme is very simple – to drown refutation attempts in this flow,” she explained.

Russia’s Aerospace Forces started delivering pinpoint strikes at facilities of the Islamic State terrorist organization in Syria on September 30. The air group comprises over 50 aircraft and helicopters, including Sukhoi Su-24M, Su-25SM and state-of-the-art Su-34 aircraft. Hundreds of terrorist facilities have been hit by Russian aircraft.

Russia’s Armed Forces act on a request from Syrian President Bashar Assad. The Russian Federation does not plan to take part in ground operations in Syria.

According to UN statistics, fighting between Syrian government troops and militants has killed more than 200,000 people and displaced millions since its start in 2011.

An international peace conference on Syria, dubbed Geneva-2, organized by Russia and the United States and designed to negotiate a solution to the Syrian crisis, held in January and February 2014, brought no particular progress.