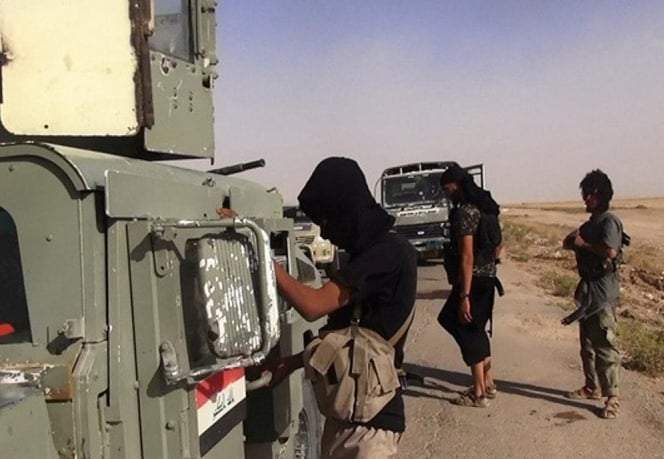 Syrian Army Official: ISIS Terrorists Suffered Huge Losses, Fleeing to Turkey
A Syrian army general says government forces have dealt heavy blows to members of the ISIS terror group and other Takfiri outfits operating in the country, forcing the extremists to flee towards the Turkish border in search of refuge.

“Our armed forces are broadening their control in the regions of Jib al-Ahmar and Salma, and all the hills around Latakia [Province], killing more than 300 terrorists. Furthermore, they destroyed several vehicles armed with machine guns near Salma and Bradon dam,” said Syrian army spokesperson Ali Muaeeb during a press briefing in the capital, Damascus, on Thursday.

He added, “The successful operations of our armed forces, and the big losses in the lines of terrorist organizations have led to the collapse of the terrorists’ morale, and their escape in large numbers towards the Turkish border.”

Muaeeb further said Syrian army troopers, backed by Russian air force and fighters from the Kurdish People Protection Units, have made headway in over 30 villages across Syria as they continue their battles against foreign-backed militants.

“Our armed forces [have] continued their military operations targeting terrorist organizations in different areas of the operation’s territories,” he said.

The foreign-sponsored conflict in Syria, which flared in March 2011, has claimed the lives of more than 250,000 people and left over one million injured, according to the United Nations.

In recent weeks, Syrian armed forces have made a series of new gains in the fight against the Takfiri militants. Reports say large numbers of ISIS terrorists are abandoning the ranks of the extremist group amid the advances of government troops.

The Russian aerial campaign against the militants in Syria, which started in late September, has contributed to the Syrian army’s counter-terror military operations in several parts of the Arab country; Press TV reported.

Hezbollah, Syrian Army Regain New Areas in Aleppo
The Syrian Army alongside the Lebanese Hezbollah forces pushed back the militant groups from vast areas in the Northern Aleppo province, and recaptured at least three more villages on Friday.

The Syrian army on Thursday won back control over 9 villages in Aleppo.

The Syrian army and popular defense forces, backed by Russian warplanes, freed vast areas in Aleppo Province from the control of the Takfiri militants, killed a senior terrorist commander and took a wide stride towards the strategic Kuweires military airbase.

The Syrian forces regained control of al-Safira village in the Southern countryside of Aleppo in the early hours of Thursday, killing dozens of terrorists, including their senior field commander Uwais al-Qoqazi.

A few hours later on Thursday the army regained control of al-Ayyubiah village in the Southern countryside of Aleppo; FNA reports.

The military spokesman said in a statement that army units established full control over al-Majbal area in Harasta and broke the defensive lines of the terrorist organization in Nouleh town in the Eastern Ghouta, killing a number of terrorists.

In the northern countryside of Homs, the military source said that army units in cooperation with popular defense groups established control over the area extending from south of the entrance of Iza’aa, Gherbal, al-Qanatri, the southern part of Teir Ma’ala town, killing a number of terrorists, injuring others and continued advance in their operations towards Jwalik, Sneisel, Teir ma’ala and al-Ghantou.

In Hama countryside, army units advanced in al-Mansoura town and killed 15 terrorist, destroyed four vehicles equipped with machine guns and five vehicles and seized an armored vehicle, according to the military spokesman who added that two vehicles equipped with 23mm machine gun were destroyed and a number of terrorists were killed in al-Farak hill in the north western countryside of Hama.

A convoy for ISIS terrorist organization was targeted in al-Raheel farm in Um Khdeij in the eastern countryside of Hama near Salamiyeh destroying 23 various vehicles and killing 45 terrorists, added the source.

In Lattakia countryside, army units expanded their control towards Jub al-Ahmar, Salma area and the mountains surrounding it in the northern countryside of Lattakia, killing more than 300 terrorists and destroying a number of vehicles equipped with machine guns in Salma and the area surrounding Bradoun Dam.

Other army units in cooperation with popular defense groups continued their operations in the southern countryside of Aleppo on various axes after establishing control over towns and villages of Blas, Tal al-Zahmoul, al-Dabaghat, al-Shaheed hill, al-Wadeehi and the area surrounding it, al-Qadara, al-Hweijeh, Kafar Obeid, al-Sbeihiyeh, al-Sabqiyeh = to the north of Abteen town.

The military spokesman emphasized that the successful operations by the military forces and the heavy losses in the ranks of the terrorist organizations triggered a collapse in the morale of terrorists while some of them fled towards the Turkish borders; Sana reported.