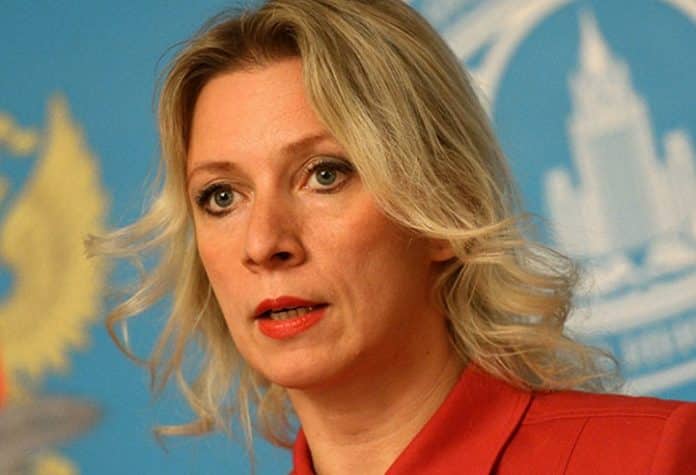 “There are so-called mass media reports which allege that Russian aircraft bombed a field hospital in the Idlib Governorate in northwestern Syria and reportedly killed 13 people. I cannot say that these reports are written by journalists but their ingenuity delights,” Zakharova, told reporters.

She questioned the credentials of the Syrian Observatory for Human Rights, pointing out that it is based in Britain and has no direct access to the ground in Syria.

“This information appears with reference to the Syrian Observatory for Human Rights based in London. As we all understand, it is very ‘convenient’ to cover and observe what is happening in Syria without leaving London and without the ability to collect information in the field,” Zakharova added.

She said that Russia’s role in the Syrian conflict is aimed “primarily” at “protecting civilians,” while “terrorist groups” continue to receive “reinforcements of people” and “equipment from abroad,” which is a “very dangerous tendency.”

“These facts raise a question as to whether parties involved in the Syrian conflict are really interested in a peaceful settlement and how this goal is reconciled with financial and technical support for anti-government armed groups, including those who directly cooperate with terrorists,” she said during a briefing.

Since joining the fight against Islamic State, Russia’s efforts in Syria have been repeatedly attacked by the Western mainstream media, which have published many unconfirmed reports employing scaremongering tactics.

AFP, a French media outlet, was responsible for publishing a piece titled 13 Dead as Russia strike hits Syria field hospital: monitor. The source in the story was identified as the UK-based Syrian Observatory for Human Rights, which is run by one man – Rami Abdulrahman. Just recently, Abdulrahman told RT that the last time he had been in Syria was 15 years ago and that all the information for his reports is taken from “some of the Observatory activists” who he knows “through common friends.”

In the past, Rahman has said he relies on sources on the ground, who are among the US funded Syrian rebels.
Shortly after the report appeared, a video emerged showcasing the exact moment of the alleged Russian hospital strike. The video was uploaded by activists known as White Helmets – a rebel group which has already been caught faking evidence of civilian deaths supposedly caused by Russian strikes.

Meanwhile, Russia said it struck a meeting place of terrorist leaders in northwestern Syria. The Russian Defense Ministry specified that it had used a KAB-500 bomb.

“A Sukhoi Su-34 bomber attacked the installation with a guided KAB-500 air bomb, which wiped the target out with everything that was inside,” MoD’s spokesman, Major General Igor Konashenkov said on Wednesday.
Despite the power of the explosion, a cameraman in the posted video runs through only a small cloud of dust.

Experts have questioned the authenticity of the video posted by the rebels, stating that it is physically impossible to film such a powerful explosion from a few meters away and survive.

“It didn’t look like an aerial bomb dropped from an airplane. It appeared to come from an angle and the angle of the explosion appeared to be more like artillery,” a former policy analyst for the US Defense Department, Michael Maloof, told RT.

This kind of unreliable reporting is just one of the latest examples. Earlier, the Turkish military released a statement saying that it had downed an unidentified drone in Turkish airspace after issuing the aircraft 3 warnings.

It was not long before reports suggested it was Russian and being used to collect information. However, a Russian drone manufacturer denied the reports, calling the photos of the allegedly downed drone part of a poorly-staged “informational provocation.”

Other baseless accusations quickly followed, including British newspapers speculating that Royal Air Force Tornado jets operating in Iraq were to be equipped with air-to-air missiles and that their pilots had been cleared to fire on “Vladimir Putin’s jets” in the case of an imminent threat.

Moscow issued a formal request to the British Foreign Office, demanding an explanation. The answer came in a news blog, when the UK’s MoD’s spokesperson wrote that “There is no truth in this story.”

Another CNN story suggested that several Russian cruise missiles targeting Islamic State positions in Syria had landed in Iran. Citing two unnamed “top US officials,” the American broadcaster reported that four Russian missiles had crashed somewhere in Iran after being launched from vessels in the Caspian Sea.