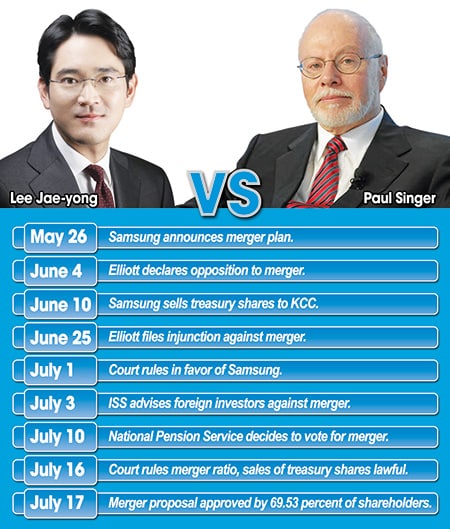 Last July, Samsung got into trouble because they published a number of controversial cartoons depicting “a Jewish hedge fund boss” by the name of Paul Singer “as a money-grabbing vulture.”[1] The Daily Mail said:

“Harvard-educated Mr Singer, 70, whose hedge fund Elliott Management owns a seven per cent stake in Samsung C&T fell out with the company after he objected to a merger deal.”[2]

The “merger deal” is a little complex:

“The merger is part of a complicated consolidation underway within the conglomerate’s network of some 80 interlinked companies that is meant to secure control of the company in the hands of its founding family ahead of the expected death of its 73-year-old patriarch and Samsung Group chairman – and South Korea’s richest man – Lee Kun-hee.

“The most outspoken critic of the merger, New York-based hedge fund Elliott Associates, which owns 7 percent of Samsung C&T, has charged that the merger’s terms dramatically undervalue C&T’s stock, effectively favoring the shareholders of Cheil, which is 42% owned by the Lee family, according to media reports. The Lee family would control the post-merger company.”[3]

Obviously the deal wouldn’t be in Singer’s favor, but The National Pension Fund in Korea realized that the deal would be good for Korea. So, they challenged Singer. He lost by a whopping 70 percent.[4] Singer and his associates took the issue to court in Seoul, and they lost again.[5] In an article entitled, “Mr. Elliott, you are messing with one of us [meaning Samsung],” chief editorial writer of the Korea Times Oh Young-jin wrote,

“Don’t get pesky about being called Mr. Elliott, Mr. Paul Singer.” Young-jin quoted Michael Douglas saying, “Greed is, for the lack of a better word, good.”[6]

Young-jin ended his article with these words:

“In a nutshell, Mr. Singer, you are in our territory, where it is a fight between you and the rest of us.”[7]

Young-jin seems to have some knowledge about this issue because he has briefly discussed Shakespeare’s The Merchant of Venice in another article, in which he alluded to the “fictional Jewish loan shark in the classic…”[8]

The Korea Times said Singer felt that the deal “undervalued the common interests of C&T shareholders.”[9] What Singer was indirectly saying was that he and his shareholders wouldn’t benefit much from the deal, even if it would be good for the average Korean.

“In reporting on the proposed merger, at least two South Korean media outlets blamed Jews for attempting to block the deal. One publication wrote that Jewish power on Wall Street ‘has long been known to be ruthless and merciless.’

“A columnist wrote that ‘Jews are known to wield enormous power on Wall Street and in global financial circles’ and ‘It is a well-known fact that the US government is swayed by Jewish capital.’”[10]

Going back to Samsung’s cartoons. Much of the Western world which discussed the issue, including the Daily Mail, indicated that Samsung were indeed anti-Semitic for publishing those cartoons. One of the cartoons actually said:

“’Elliott Management’s representative method of earning money is, first of all, to buy the national debt of a struggling country cheaply, then insist on taking control as an investor and start a legal suit.’”[11]

Within a few weeks, Samsung removed the cartoons in order to lower the political temperature. This is understandable. They even apologized to the ADL saying,

“We are a company that is committed to respect for individuals and enforces strict non-discrimination policies. We condemn anti-Semitism in all its forms.”[12]

The simple questions are these: was Samsung really anti-Semitic for publishing those cartoons? Is this really inconsistent with what the Dreadful Few have been doing for the past twenty years or so in America? Don’t we remember Goldman Sachs? Perhaps it is time to bring in Greg Smith.

Greg Smith was Goldman Sachs executive director and head of the firm’s United States equity derivatives business in Europe, the Middle East and Africa. Smith, a Jew himself, worked for the company for almost 12 years. Here is what he said in the New York Times:

“I believe I have worked here long enough to understand the trajectory of its culture, its people and its identity. And I can honestly say that the environment now is as toxic and destructive as I have ever seen it.

“To put the problem in the simplest terms, the interests of the client continue to be sidelined in the way the firm operates and thinks about making money. Goldman Sachs is one of the world’s largest and most important investment banks and it is too integral to global finance to continue to act this way.

“The firm has veered so far from the place I joined right out of college that I can no longer in good conscience say that I identify with what it stands for.

“What are three quick ways to become a leader [at Goldman Sachs]? a) Execute on the firm’s ‘axes,’ which is Goldman-speak for persuading your clients to invest in the stocks or other products that we are trying to get rid of because they are not seen as having a lot of potential profit.

“b) ‘Hunt Elephants.’ In English: get your clients — some of whom are sophisticated, and some of whom aren’t — to trade whatever will bring the biggest profit to Goldman. Call me old-fashioned, but I don’t like selling my clients a product that is wrong for them.

“c) Find yourself sitting in a seat where your job is to trade any illiquid, opaque product with a three-letter acronym…

“I attend derivatives sales meetings where not one single minute is spent asking questions about how we can help clients. It’s purely about how we can make the most possible money off of them. If you were an alien from Mars and sat in on one of these meetings, you would believe that a client’s success or progress was not part of the thought process at all.

“It makes me ill how callously people talk about ripping their clients off. Over the last 12 months I have seen five different managing directors refer to their own clients as “muppets,” sometimes over internal e-mail. Even after the S.E.C., Fabulous Fab, Abacus, God’s work, Carl Levin, Vampire Squids? No humility?

“I mean, come on. Integrity? It is eroding. I don’t know of any illegal behavior, but will people push the envelope and pitch lucrative and complicated products to clients even if they are not the simplest investments or the ones most directly aligned with the client’s goals? Absolutely. Every day, in fact…

“These days, the most common question I get from junior analysts about derivatives is, ‘How much money did we make off the client?’ It bothers me every time I hear it, because it is a clear reflection of what they are observing from their leaders about the way they should behave.

“Now project 10 years into the future: You don’t have to be a rocket scientist to figure out that the junior analyst sitting quietly in the corner of the room hearing about ‘muppets,’ ‘ripping eyeballs out’ and ‘getting paid’ doesn’t exactly turn into a model citizen.”[13]

This is not news at all. The noted journalist Matt Taibbi has been writing about how Goldman Sachs sacked much of the world for more than five years. Writing in the Rolling Stone, Taibbi pulled some punches when he said:

“The first thing you need to know about Goldman Sachs is that it’s everywhere. The world’s most powerful investment bank is a great vampire squid wrapped around the face of humanity, relentlessly jamming its blood funnel into anything that smells like money.

“In fact, the history of the recent financial crisis, which doubles as a history of the rapid decline and fall of the suddenly swindled dry American empire, reads like a Who’s Who of Goldman Sachs graduates.”[14]

Taibbi, as a serious journalist, went to great length documenting how Goldman Sachs is actually a giant vampire squid that sucks the blood out of humanity. But again those ideas aren’t new at all. In 1841, the German Jewish poet Heinrich Heine proclaimed:

“Money is the god of our time, and Rothschild is his prophet.”[15]

Heine saw this as dangerous to the Jews. Marx saw it too. But the only people who are still wondering whether there is any problem at all are the Christian Judaizers, people who are always willing to prostrate before “The Chosen” because Premillennial Dispensationalism dictates what they can and cannot say and do.[16]

The fact is that no one can seriously say that Smith and Taibbi are anti-Semites. But Samsung officials are anti-Semitic because they had the audacity to say that their oppressors are of Jewish extraction.

This is probably a historic moment in Korea, since some companies are beginning to realize that there is more to NWO agents than meets the eye. They seem to be saying that the price for obeying NWO agents is way too high.

Probably NWO agents will not forget that they got defeated in Korea. They need a better strategy other than worshiping Mammon and plundering much of the world through corruption. If they ask me for advice, I would simply tell them that they need to drop their essentially diabolical weltanschauung and embrace Logos in all its manifestation. That is the best way to bring peace to an angry world.

[16] For recent studies on this, see for example Donald M. Lewis, The Origins of Christian Zionism: Lord Shaftesbury and Evangelical Support for a Jewish Homeland (Cambridge: Cambridge University Press, 2010); Robert O. Smith, More Desired than Our Owne Salvation: The Roots of Christian Zionism (New York: Oxford University Press, 2013); Stephen Spector, Evangelicals and Israel: The Story of American Christian Zionism (New York: Oxford University Press, 2009). For related studies, see Paul Boyer, When Time Shall Be No More: Prophecy Belief in Modern American Culture (Cambridge: Harvard University Press, 1992). I have been thinking about discussing those books and addressing this vitally important issue once again since last year. For example, I finished reading Lewis’ book in the summer of last year, but I have not gotten time to discuss it. Hopefully I’ll be able to do so this coming winter.