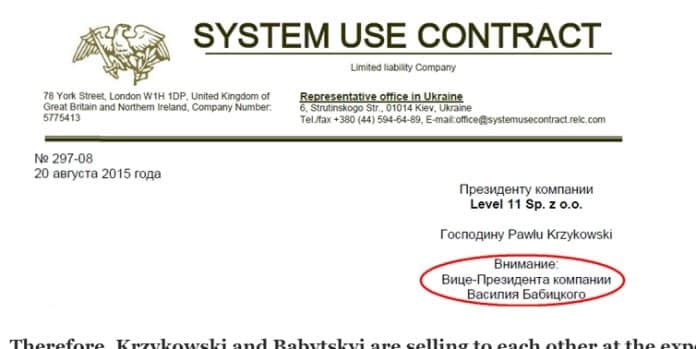 By ORIENTAL REVIEW for VT

Past weekend the CyberBerkut team revealed another story, shocking in its extraordinary cynism even for today’s Ukraine. It turned out that the top Ukrainian Interior Ministry officials are abusing Western military assistance, designated to reequip and strengthen the Ukrainian National Guard (internal police forces). They organized an international traders’ chain to secretly reexport these arms to the Middle East where they would most likely appear in the hands of Saudi-linked radical groups operating in Syria and other hot spots.

According to the hacked documents, on April 14, 2015 the president of the Polish weapons traderLevel 11 Ltd Pawel Krzykowski contacted Anton Gerashchenko, a Verkhovna Rada delegate and councellor to the Interior minister Arsen Avakov, asking him to lobby his commercial proposal toAlexander Turchinov, Secretary of the National Security and Defense Council of Ukraine. So he did:

The attached catalogue contained, among others, the Soviet-designed and Poland-assembled towed 23 mm anti-aircraft twin-barreled autocannon ZU-23-2: Of course, it could be a pure coincidence, if not a single detail: the director of the Cyprus Blessway Ltd Vasyl Babytskyi is the citizen of Ukraine and vice-president of Level 11: Therefore, Krzykowski and Babytskyi are selling to each other at the expense of Ukraine’s police budget (factually for the Western aid funds) a heavily over-priced and out-dated military equipment (55K Euros for every ZU-23-2 designed in 1960!) and pay kickbacks to Gerashchenko, Avakov and perhaps Turchinov. Neither Ukrainian nor US officials are seemingly care about the final destination of the weapons supplied to the Middle East (we have a lot of doubt that Saudi Armed Forces are in desperate need of the old-fashioned  Soviet cannons). But Taliban (and now Daesh) would be grateful for any striking barrel pointing at the sky. Perhaps the US F-16 hit in the eastern Afghanistan last week, was a victim of one of these items.

By the way, this story gives another breath to notable Gerashchenko’s appeal “to collect information on the Russian citizens who are involved in the air operation against the “Islamic State” in Syria so that the IS militants and their brothers in arms in Russia, in the Caucasus, could find them later and take revenge according to the Shariat law.” The links between Ukrainian and Middle Eastern are apparently no only verbal…

As we see, governments may fall and rise in Kiev, but the old and very profitable Eastern Europeanblood sport called “sell the Soviet arsenal to the Arabs“ is being practiced  non-stop.