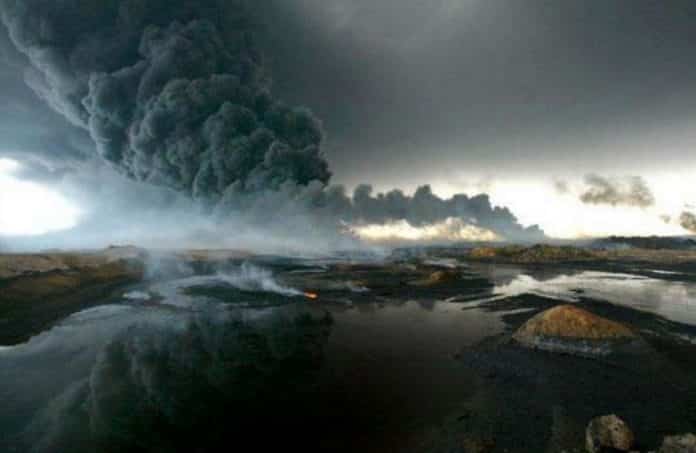 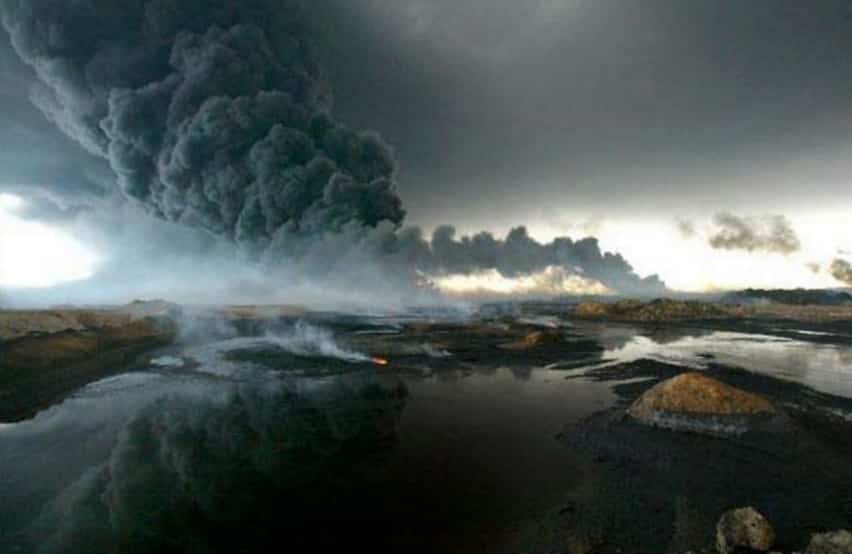 Few can deny the fact that the US allied with the west create problems for the world such as drug trafficking, human rights violations, defiance of international laws and the UN. It stokes religious extremism, creates monster of terrorism, initiate promote proxy wars and then make hue and cry and exert pressure on the international community to defeat and kill these problems.  Afghanistan was occupied in November 2001 under the cover of terrorism to accomplish a planned agenda.

In pursuance of achievement of its strategic objectives, chaos was deliberately brewed up in Middle East (ME) by the US and its western allies by invading and occupying Iraq in March 2003 that was stable, unified and prosperous. This unjust and illegal invasion on trumped up charges triggered civil war followed by sectarian war which is still raging. Arab Spring behind which CIA, Mossad and MI-6 had a hand, brought down the regimes in Tunisia and Egypt in 2011, which were also steady and serene. Toppling the ruling regime in Libya and murdering Qaddafi in 2011 pushed the peaceful and prosperous country into the vortex of turmoil.

Inter-tribal disorder and drone war against Al-Qaeda in Yemen followed by uprising and takeover of power by Houthis resulted in a civil war. Houthis and troops loyal to former President Saleh backed by Iran are pitched against Saudi supported Yemense forces. The US and Saudis supported the military regime of Gen Sisi, which toppled elected government of Morsi in July 2013 and then persecuted the Islamists with a vengeance. It set off an insurgency by Muslim Brotherhood in Sinai Peninsula. Since March 2011, frenetic efforts are being made by the US, NATO, Saudi Arabia, Qatar and Turkey to topple Assad led regime in Syria.

It is no secret that it was at the instigation of Western ‘partners’ that since the 1980s, Islamic extremism has gained momentum rapidly.

Covert operations, psychological operations, proxy wars, secret financing of Islamic structures became important tools of the neo-cons to achieve their objectives in ME. Non-state actors were used to topple regimes and to replace them with puppet regimes so as to make Israel the unchallenged power of ME.

Financial and military assistance was furnished to terrorist groups by the US and its allies to defeat Al-Qaeda in Iraq and then to eliminate the Assad regime in Syria. Cash-flow to the militant groups was managed by the NGOs. These covert acts gave birth to the ‘Islamic State of Iraq and Sham’ (ISIS) and ‘Jabhat al-Nusra’ in Syria.

Similar strategy was applied in Libya to overthrow Qaddafi regime. While flirting with the extremists, the plot makers were sure that the so-called policy of controlled chaos in far-away regions shall not result in tragic consequences, at least, in the middle term.

The strategy of use of direct military force and proxy war to create controlled chaos has borne fruit since the whole of ME today is in shambles. However, many intractable problems have cropped up which have upset the sole super power and the west. Foremost problem is the mushrooming of militant groups that are not in full control of the creators. Among them are Al-Qaeda under Zawahiri which is a strong force in Arabian Peninsula and ISIS (Daesh) under Baghdadi, which has carved out a Caliphate stretching from Raqqa in Syria to short of Dyala in Iraq. These two groups are a force to reckon with and could not be tamed.

Of these, ISIS is seen as the biggest threat since it has spread its tentacles to Libya, Egypt, Yemen, Somalia, Algeria, Afghanistan and Pakistan and is threatening Saudi Arabia and other Gulf States. Iraqi National Army (INA) trained and equipped by the US has proved ineffectual against Daesh. In Syria, Daesh is the most powerful group and holds sway over almost half of the country with most oil and gas fields in northern and Eastern Syria under its control. It is successfully striving to occupy leading position among the extremist organizations.

With Raqqa declared as the capital of the Caliphate, Daesh has started to set up their own ‘public institutions’, including financial and judicial systems. Sustainable centralized control over the armed groups has been organized. The strengthening of ISIS has seriously destabilized the situation in Africa. ISIS provides substantial military and financial assistance to the local extremists, sends reinforcements composed of the Syrian and Iraqi terrorists. The groups receiving such support are ‘Ansar al-Sharia’, operating in North Africa, and ‘Boko Haram,’ in Nigeria, while the greatest threat to the stability of East Africa is the Somali terrorist organization ‘Al-Shabab al-Mujahedeen’.

Equally alarming is the situation in South Asia and Central Asia, where extremist organizations such as the Tehreek-e-Taliban Pakistan (TTP), BLA, BRA BLF and ‘Hizb-ut-Tahrir’ in Pakistan, ‘Taliban’ and Islamic Movement of Uzbekistan in Afghanistan maintain high combat potential.

Whereas security forces in Pakistan have been successful in flushing out terrorist groups from all their strongholds in FATA and have almost broken the back of the Baloch rebels in Balochistan, in Afghanistan the Taliban and other resistance forces have a definite edge over Afghan national Army and small residual force of ISAF which has been held back till end 2017. About 50,000 militants are fighting the 14000 occupying forces and 350,000 Afghan security forces. Nearly 80% Afghan territory is under the sway of Taliban.

Entry of Daesh, initially in Helmand and now in Nangarhar and their marrying up with TTP, made possible by RAW, is a recent development. ‘Jamaa Islamiya’s main goal is the creation of a single Islamic theocratic state within the borders of Brunei, Indonesia, Malaysia, Singapore and the Muslim provinces of Thailand and the Philippines.

In the wake of burgeoning threat posed by Daesh, the US and NATO decided to boost ground action with air support both in Iraq and in Syria in August 2014. Syrian, Turkish and Iraqi Kurds were equipped and pressed to fight the Daesh fighters while Iraqi and Iranian militias joined the fray. Although this combined effort has managed to contain the onslaught of Daesh but has not been able to roll back and defeat them despite the US having spent $4.75 billion on 6070 airstrikes in Iraq and Syria.

Strategy of chaos in someone else’s house to achieve sinister objectives has backfired and things have spun out of control. The chaos in ME has spilled over into neighboring Europe and its effects can be felt in USA and other parts of the world. Four years civil war in Syria has taken the lives of 230,000 people and displaced 12 million and has now created biggest refugee crisis.

Europe is flooded by refugees from Syria as well as other war affected countries since the oil rich Gulf States have refused to accommodate them. Only Jordan and Lebanon have accepted two million refugees. About 6000 refugees are entering European shores daily which have created a huge refugee crisis in Europe and worst human disaster since World War 2.

The other spillover effect is that in recent years, the level of terrorist threat in Europe has increased. This is primarily due to the ever increasing numbers of white Jihadis joining Daesh and insurgents returning from the “hot spots” ready to use the gained experience at home. About 600 jihadists returned in the past four years to Germany alone. The extremists’ influence has spread to include some South American regions. The Tri-border Area, located along the junction of Argentina, Brazil and Paraguay, is considered a springboard by the extremists.

The other aspect which will grow into a big problem is the refugees who hate the US led west since they consider them responsible for their misfortunes. Aggrieved refugees interred in camps or otherwise if not handled with care and settled will be vulnerable to exploitation by militant groups and may further beef up the rank and file of Al-Qaeda and Daesh.

While Europe is by and large soft towards migrating refugees and are not shunning them away, there are many Europeans who are opposing the inflow and viewing them as security hazard. They fear that they may turn into ticking bombs inside Europe. None in Europe as well as in USA dwell upon the root causes which bred religious extremism and terrorism and contemplate possible remedial measures to dilute extremist tendencies. Injustice, poverty and insensitivity of the elites are major causes of growth of extremism.

By and large the big powers prefer use of force over dialogue to bring peace and arrive at political settlement. Ideological rift between Saudi Arabia and Iran is impeding talks on Syrian crisis held at Vienna on October 30. Both accuse each other of sponsoring proxy wars to promote respective ideologies. While Saudi Arabia, Gulf States, Turkey and the US want Assad to quit before finalizing a settlement, Russia, Iran and Hezbollah want Assad to stay.

Too many actors and non-state actors are involved in Syrian civil war. Entry of Russian air force in support of government forces has made the overall situation grave particularly when airspaces of Turkey, Iraq and Iran are being violated and jets of opponents are flying perilously close to each other.

The US-Russian antagonism has sharpened and no one is prepared to step back. The US has further increased the temperature by inducting 50 Special Forces soldiers in Syria to boost the spirits of Free Syrian Army and other so-called rebel groups such as Al-Nusra. Possibility of increase in numbers of American troops and induction of Russian ground troops cannot be ruled out. Syria is fast turning into a flashpoint which needs to be defused at the earliest.