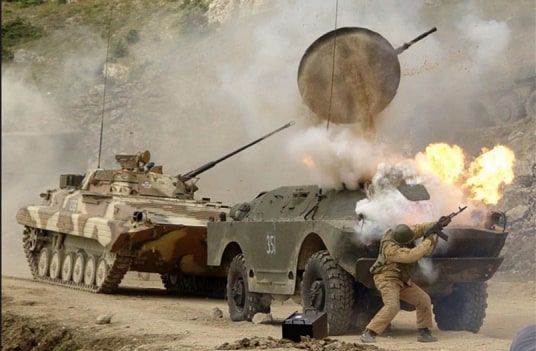 No state in the world is willing to risk its security by engaging militarily in a foreign state’s territory, unless it holds interest in that country. When Iraq and then Libya were invaded, no world power stepped in, but when it came to Syria, where Russia, no doubt, has interests, it moved into action by carrying out air strikes on IS positions. Now, with Russia and the west’s persistent struggles to overcome the war and the major power’s disagreement over Asad’s removal, a lasting conflict in Syria can be predicted that is certainly leaving effects to exacerbate Afghan war.

In Afghanistan, things are different. International forces on the ground in Afghanistan would not allow Russia to think of an air raid just like it did in Syria. It might respond the threat in a step-by-step way.

Russia has now wholly concentrated on Syria, but it is not the sole problematic point for this major power. Few weeks back, Moscow sent combat helicopters to its oversea military base in Tajikistan, near to the border with Afghanistan.

Moscow believes Afghan government is in no state to willingly determine on its foreign policy. For now, the military offer to Afghanistan may be the only way of Moscow’s response to the increasing menace of terrorism, or it is trying to highlight its strength and presence in the region with possible approach to Afghanistan. There is no doubt Afghan government is consulting its lords before making “big political deals”.

The military supplies to Tajikistan come after the Taliban’s developments and deadly raid on the northern Kunduz province of Afghanistan. The mainly Muslim and relatively poor Central Asian nations are likely to come under influence of the extremist groups. There have been reports of defecting of even military man to the IS front. In May, Gulmurod Khalimov, commander of elite Tajik police force defects to ISIS, claiming Tajik government was suppressing Islamists.

Ruled by secular dictatorship, the Central Asian states leaders recently took to make crackdowns on Islamist movements, in response to the possible public trends to extremist groups. Experts believe the recent draconian measures against Islamists could bear negative outcomes with many turning to a warmly welcoming front of ISIS.

NATO states will not be sensitive to Moscow’s military help to Afghanistan until it remains limited to some combat aircrafts or so on. It will be particularly “provocative” when the U.S and NATO find the Russia’s growing influence on the ground in Afghanistan.

If Russia’s intent of military offer is just to ensure security in Afghanistan, it would be heartedly welcomed by the west, else tensions could go high between the superpowers. From Moscow’s point of view, if the U.S plans to maintain a long-standing interest in the region, it would be reluctant to cooperation.

After years of frequent calls on the west for the joint action against narcotics and terrorism, it learned the efforts were fruitless. It even voiced concerns over the consequences after the US forces withdrawal by the end of 2014.

In such a fragile situation, Moscow will not stay “action-less” to the latest developments in the region. It may not just depend on embattling Tajik border with Afghanistan. Russia acts warily towards surrounding challenges – Ukraine, Syria, and Afghanistan – as it knows a tiny failure in handling today’s complicated struggles could leave a hardly recoverable loss.

China, a country never spoke of war in decades, reportedly announced to side with Russia in Syria war. China’s shift in policy and the first time likely engagement of the war marks the country is running out of “patience” to the regional occupations and interferences. It might not want to be the witness of conflicts anymore; but to become part of war. It seems it can no longer tolerate a regular intimidation.

China seeks for a benign economic environment in the region to expand investments. This second-largest economy explores solution for peace to implement mega economic plans, though war is hobbling it from doing so.

The scenario of Russia and China’s alliance in wiping out terrorists in the region could be “optimistical” for some, thoughtless of the dire outcomes of another confrontation in Afghanistan if the rivalry between China and Russia on one side, and the U.S and NATO on the other side erupts – which might convert Afghanistan into the present Syria.

After the World War II, world powers agreed not to directly get into war with each other, but instead wage competition in the world’s occupied lands – which has come to reality in Syria and, imminently, in Afghanistan. Therefore, the onset of rivalries among superpowers marks the beginning of devastation of an already war-hit Afghanistan.

The intensity of war and clashes in Syria could affect Afghanistan’s war in the future – if not now. The warring sides tend to choose military options and believe negotiation doesn’t ensure the whole of interests. From the perspective of many, the dialogue “scarcely pays off”.

A Russian authority, referring to the rising influence of IS terrorist group in the Central Asia, has acknowledged that the insurgents onslaught to the areas in northern Afghanistan – particularly Kunduz – has contributed to the growing insurgency in the Central Asia. Experts cite the likely coalition of Taliban and ISIS as another concern for Moscow.

However, it appears nearly impossible that the militants would manage to cross the border into Central Asian countries, especially when the alerted Tajik and Russian military forces’ finger is at the trigger. Even if they step over the border, they will not be able to advance to the targets, because of an unfamiliar and unwelcoming environment they face with. This rather works when the fighters emerge out of local communities.

Afghan government should tame own situation

According to reports, Afghan security forces recently took back Dashte- Archi district of northern Kunduz province from Taliban militants. This clearance operation was not any resourceful than previous ones. Indeed when the time ripe and the policy permit, a hard-to-do and impossible job gets accomplished.

If this operation with similar forces and tactics is enforced on the other Taliban-held areas and the high level security authorities take transparent lead of operation, the region could be cleared of the mess. Known to almost all Afghan nation, the fact behind the fall of northern areas to the Taliban is the government’s sheer “non-performance”. It can make gains there if it cast aside leniency and move on aggressively.

The victory is fully “conceivable”. If AG makes a maximum use of provided military equipments; back local forces and uprisings, it can defeat the armed opponents. There is a high anti-militant morale among people. Afghan people believes the militant’s arrival in an area could clearly mean bringing the evils of burning schools, locking up of women in the houses, poverty, illiteracy and tens of other sufferings.

With a powerful public stance against militants in view of the above hardships, government need not to suffer military fatalities or spend millions, what it needs to do is to supply arms and back the appropriately-managed local force to drive insurgents away from the area.