Arthur Topham was convicted of hate speech under the Criminal Code of Canada for a satire involving a pamphlet published by Theodore K. Kaufman in 1941. Kaufman’s text called for the extermination of the German nation. Kaufman advocated the sterilization of all 48,000,000 German males then under 60 years of age. 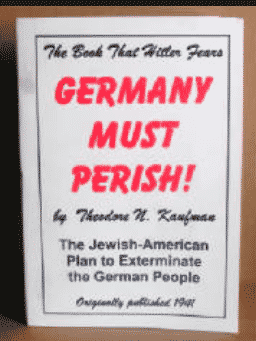 The aim was to “prevent the people of Germany from ever again reproducing their kind.” Kaufman proposed that 20,000 surgeons should be assigned to the project of exterminating the capacity of Germans to procreate. He promoted the option of “genetic sterilization” as the best way of eliminating the German component of the human race. Kaufman’s text, a best seller in the United States when it was first published, characterized the German people as “misfits, degenerates, the insane, and hereditary criminals.”

The Canadian B’nai Brith and the Canadian Jewish Congress persuaded the Attorney General of British Columbia to prosecute Topham for the content of his web site, Radical Press.com. As discussed in considerable detail in the two and a half weeks of court proceedings before a 12 person jury in Quesnel BC, Topham satirically reversed the terms of Germany Must Perish by inserting “Israel” for Germany.

The main “expert witness” for the government was Len Rudner of the Canadian Jewish Congress (CJC). It turned out that Mr. Rudner did not write the “expert report” he submitted to the court. It was written, rather, by the Bernie Farber.

Farber and Rudner have been the subject of strong attacks from within the Jewish community. Jewish broadcaster Ezra Levant accused them of being “hacks” working for an outfit that is a “dumping ground” for failed politicians who couldn’t “cut it” in real professions. Wrote Levant, “just so you know: Len Rudner and the other baffoons at the Canadian Jewish Congress don’t speak for me. They don’t speak for any of the Jews I know.”

The expert witness for the defense was Gilad Atzmon, an Israeli-born author, scholar and jazz musician as well as a former member of the Israeli Defense Force. In his testimony Atzmon distinguished religious and ethnic Judaism from political Judaism. According to Atzmon this political strain of identity can lead to “cold blooded murder of

Mr. Topham wrote an article after the verdict entitled, “Locking Up Your Charter Right to Free Expression.” The Canadian Charter of Rights and Freedom is part of Canada’s “supreme law.” It includes words that supposedly protect freedom of speech and freedom of expression in a country that used to be widely respected as a defender of the principles of universal human rights. Topham observed that “the way is open” to making his case the basis of a Supreme Court challenge to the constitutionality of the offending hate speech provisions of Canada’s Criminal Code. 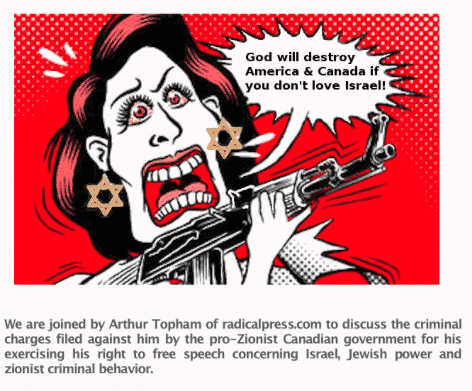