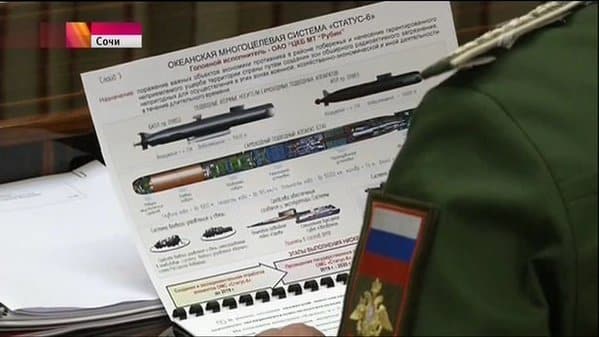 [ Editor’s Note:  Nuclear torpedos certainly are not new. The US and Russia had them during the Cold War, and one was almost used during the Cuban missile crisis when a Russian sub that had been hiding for days thought the war had already decided and wanted to fire theirs, at a port facility.

This was avoided because three officer had to agree to fire and one did not. It is little stories like this that bring life to a silly phrase like “doo doo happens”, where it is no joke.

But what is new is having what in effect is a long range robot torpedo that can take out a port facility. Mini-nuke ones to take out at aircraft carrier have been around for sometime also. We must assume that some defenses have been developed for them but one hears very little about that…the really big secret… Jim W. Dean ]

The Kremlin has confirmed “some secret data” was accidentally leaked when Russian TV stations broadcast material apparently showing blueprints from a nuclear torpedo, designed to be used against enemy coastal installations.

During President Vladimir Putin’s meeting with military officials in Sochi, where the development of Russia’s military capabilities were being discussed, a number of TV crews were able to capture footage of a paper that was certainly not meant for public viewing.

The footnote to the slide stated that Status-6 is intended to cause “assured unacceptable damage” to an adversary force. Its detonation “in the area of the enemy coast” would result in “extensive zones of radioactive contamination” that would ensure that the region would not be used for “military, economic, business or other activity” for a “long time.”

According to the blurred information provided in the slide, the system represents a massive torpedo, designated as“self-propelled underwater vehicle,” with a range of up to 10 thousand kilometers and capable of operating at a depth of up to 1,000 meters.

It remains unclear if such a system is indeed being developed or the slide was presented as just one of the options the Russian military could hypothetically offer. However, according to the leaked paper, the weapons system could be developed by the Rubin design bureau for marine engineering, and may potentially be delivered using nuclear-powered “Project 09852” and “Project 09851” submarines.

“It is true some secret data got into the shot, and it was subsequently deleted,” Peskov said on Wednesday. “We hope that this won’t happen again.”

“Over the past three years, companies of the military-industrial complex have created and successfully tested a number of prospective weapons systems that are capable of performing combat missions in a layered missile defense system,”Putin said. “Such systems have already begun to enter the military this year. And now we are talking about development of new types of weapons.”