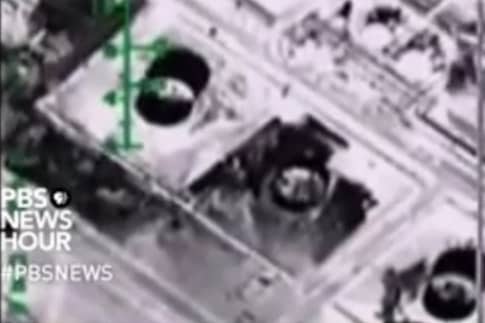 PBS NewsHour, a daily US television news program shown on the US Public Broadcasting Service (PBS), used footage of Russian airstrikes against ISIL targets, claiming that they were US airstrikes, an Information Clearing House article revealed.

Earlier this week, the US government said it would intensify anti-ISIL airstrikes and bomb the terrorist organization’s oil infrastructure, which is ISIL’s primary source of income.

After that, on November 16, the US military said it destroyed 116 trucks carrying illegal oil in ISIL-controlled territories.

“On Monday, 295 trucks were in the area, and more than a third of them were destroyed, United States officials said. The A-10s dropped two dozen 500-pound bombs and conducted strafing runs with 30-millimeter Gatling guns. The AC-130s attacked with 30-millimeter Gatling guns and 105-millimeter cannons,” the New York Times colorfully described the US military operation that allegedly took place on November 16.Well, it sure sounded like a major anti-ISIL operation in the wake of the Paris attacks. But so far, these are just claims, not backed by any evidence.

Unlike the US Air Force, which didn’t provide any video evidence from their alleged operation, the Russian Defense Ministry promptly released videos of what exactly happened to terrorists and how the operation unfolded.

On November 19, PBS NewsHour ran a program on ISIL and “showed” how their oil trucks were destroyed by US airstrikes.

It’s all fine and dandy, but the US public broadcaster used the footage of Russian airstrikes, passing them off as US airstrikes, without revealing the true source.

“For the first time the US is attacking oil delivery trucks,” the voice-over said between 2:30 — 2:35, while showing a clip of exactly the same video published by the Russian Defense Ministry the day before.

© PHOTO: YOUTUBE/PBS NEWSHOUR
The PBS shows footage of Russian airstrikes against ISIL targets, passing them off as US airstrikes

The PBS program neither mentioned the Russian military operation nor revealed the source of the footage.

What the US channel did was just outright lying, because millions of viewers would certainly think the video footage showing the explosions of oil trucks was from US airstrikes about which the New York Times ran an article on Monday.