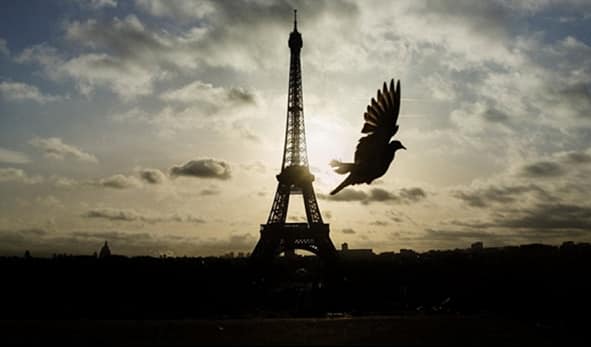 from Sputnik, Moscow   …excerpted from New Eastern Outlook, Moscow
Who is Really Killing Paris, and Why?
While the world is mourning the death of the Paris massacre’s victims, purportedly killed by ISIL fighters, the fact that US, Saudi Arabian and Qatari policymakers have facilitated the Syrian crisis remains largely unnoticed, US columnist Jim W. Dean remarks.

The world never mourned the victims of the Syrian strife in the way it mourns the death of Parisians killed during the hideous Friday 13 attack, US columnist and managing editor for VT Jim W. Dean notes, Sputnik reported.

“As one world leader after another sent sympathy and solidarity to the French nation, and some already were hinting at a stronger anti-terrorist jihad against ISIL, I was not impressed. World powers don’t launch jihads against themselves, and some of them are too busy running regime change terror operations like those that have been going on in Syria for five years,” Dean wrote in his recent article for New Eastern Outlook.

The Representative Council of the Jews of France (CRIF) has now called for fighting jihadism “without mercy.” But why the CRIF has not expressed its willingness to crack down on the Persian Gulf monarchies known for their support of radical Islamists in Syria, Iraq and beyond, Dean asked.

According to the US columnist, the elites of US, Israel, Jordan, Turkey, Qatar, and Saudi Arabia, have been involved, in various ways, in a covert war against Syria.

American-German researcher F. William Engdahl wrote in his article for RT on June 24, 2014: “Advertised publicly as training of ‘non-extremist’ Muslim jihadists to wage war against the Syrian Bashar Assad regime, the secret US training camps in Jordan and elsewhere have trained perhaps several thousand Muslim fighters in techniques of irregular warfare, sabotage and general terror.”

It seems that no one in Washington was bothered about the possible consequences of that move.

On the other hand, in 2015, US Marine combat veteran Gordon Duff reported that 2500 TOWs, which vanished from the US’ stockpiles, then, inexplicably, found their way onto the Syrian battlefield along with weapons supplied by the Saudis to Syrian extremists.

“I can understand the hypocrisy on the part of the extremist perpetrators and their cheerleading squads, but why are so many of the self-proclaimed anti-terrorist hypocrites not booed off the public stage wherever they appear, when we know they are handing out free passes to themselves for terrorists that they like, the ones attacking Syria and then Iraq,” Dean wondered.

Meanwhile, at the second Vienna meeting on Syria, US Secretary of State John Kerry suggested that Syrians “will have an interim government in six months” and possibly will be able to conduct presidential elections a year later.

However, Dean expressed his skepticism regarding the prospect of Bashar al-Assad stepping down.

“Why should he?” the US columnist asked, adding that the Russians and Iranians have repeatedly stated that it is for the Syrian people to determine the future of their state.

“John Kerry pretends he agrees with this and then wants Assad out, because the 5% Syrian opposition crowd claims no peace is possible with Assad, when they ARE talking about peace with Assad,” Dean pointed out.

“Does anyone think the Syrian military is going to take orders from some foreign committee-selected interim head of state? I sure as hell don’t think so, not after 250,000 dead, over a million wounded, and 11 million refugees,” the US columnist concluded.