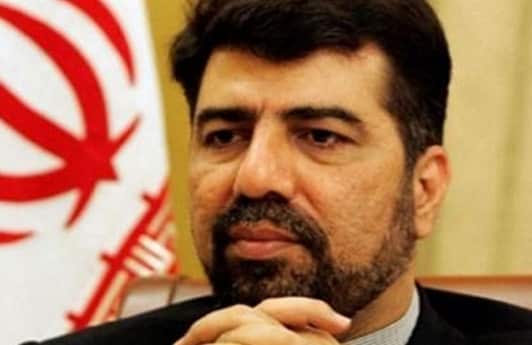 TEHRAN (FNA)- The body of Iran’s former ambassador to Beirut Qazanfar Roknabadi who went missing during the recent stampede in Saudi Arabia has been identified, informed sources disclosed.

“Two members of Roknabadi’s family are currently in Saudi Arabia and after conducting DNA tests and their conformity with Roknabadi it came to be known that the former Iranian ambassador has been killed in Mina tragedy,” an informed source told FNA on Wednesday.

The source said that Roknabadi’s body will be sent to Iran on Thursday, adding, “Additional DNA tests on the body will once agains be conducted in Iran.”

Roknabadi’s case came under spotlight both in the Iranian and Saudi media outlets after the Mina tragedy.

Roknabadi, one of Iran’s outstanding diplomats, served as the country’s ambassador to Lebanon for several years.

But, Iranian Foreign Ministry Spokeswoman Marziyeh Afkham strongly rejected the Arab media reports, saying that Roknabadi traveled to the country with his personal passport and on a Hajj visa.

“He headed to Hajj trip with his ordinary personal passport, and the precise passport information of all Hajj pilgrims, including his, have been provided to the Saudi government authorities and there is no doubt about the relevant information and details and the way that he has entered Saudi Arabia,” Afkham said late last month.

“Our colleague at the foreign ministry Mr. Qazanfar Roknabadi’s ordinary passport was sealed with a Hajj visa stamp and based on the received information; under the present conditions and given the necessity for providing the identity documents of all those who have gone missing (in Mina incident), the records related to him, whose name is seen in the list of those who gone missing in Mina incident, have been given to the Saudi officials and the existing media hypes on the issue are incorrect and derived from certain purposes or goals,” she added.

Also Deputy Head of Iran’s Hajj and Pilgrimage Organization Hamid Mohammadi dismissed Arab media reports claiming that Roknabadi either is not in Saudi Arabia or has traveled to the country illegally.

“We reject the report since all documents on the presence of Qazanfar Roknabadi in Saudi Arabia and his participation in Hajj rituals are available,” Mohammadi told FNA.

He underlined that such media allegations were baseless.

“Iran will continue following up the case of missing pilgrims in Mina tragedy until the fate of last missing pilgrim is determined,” Amir Abdollahian said in a meeting with visiting South African Vice-President Cyril Ramaphosa in Tehran.

He reiterated that the fate of Iran’s 25 missing Hajj pilgrims is still unclear, and said, “Iran is seriously following up the fate of all missing pilgrims through different channels in Saudi Arabia.”

Speaking to FNA on Thursday, Amir Abdollahian said that officials at Hajj and Pilgrimage Organization as well as Iran’s embassy in Saudi Arabia have recently held talks with the Saudi officials on Roknabadi’s case.

The Saudi charge d’affaires in Tehran has been informed of Iran’s efforts for several times, he noted.

Blaming Saudi Arabia for the tragic Mina incident on September 24 that claimed the lives of thousands of pilgrims, including 465 Iranians, Amir Abdollahian said that Iran will persist in its efforts to clarify the fate of all Iranians who have gone missing in Hajj tragedy.

He underscored that Iran has been pursuing the fate of Roknabadi through the United Nations (UN) and International Committee of the Red Cross (ICRC), adding that the country will try every means to clarify the fate of the former ambassador and other Iranian nationals who went missing during the Mina incident.

A stampede during one of the last rituals of the Hajj season on September 24 killed at least 7,477 people and left thousands wounded.

The stampede occurred during the ritual known as “stoning the devil” in the tent city of Mina, about two miles from Mecca.

At least 465 Iranians lost their lives in the incident, while hundreds of others were wounded.

On September 30, Supreme Leader of the Islamic Revolution Ayatollah Seyed Ali Khamenei warned Saudi Arabia that the slightest disrespect for the Iranian pilgrims who are in Mecca for the Hajj ceremony would be reciprocated with Tehran’s harsh and crushing response.

Ayatollah Khamenei called for setting up a fact-finding committee of Iranian and other Islamic countries’ authorities to probe the death of over 4,000 Hajj pilgrims in Mina and missing of hundreds of them, and said, “The Saudi government is not complying with its responsibilities to transfer the bodies of those who have been killed (in Mina stampede) and the Islamic Republic of Iran has so far, respected the brotherhood in the Muslim world by exercising self-restraint and Islamic politeness but they should know that the slightest disrespect for tens of thousands of Iranian Hajj pilgrims in Mecca and Medina and any lack of  responsibility to transfer the bodies will result in Iran’s crushing and violent reaction.”

Ayatollah Khamenei underlined that Iran doesn’t want to have an early judgment of the cause of the incident “but we believe that the Saudi government hasn’t acted upon its responsibilities with regard to the injured pilgrims in the Mina incident and has left them desperate and thirsty”.

He said Iran has so far practiced self-restraint over the death of its citizens in Saudi Arabia, “but they should know that Iran’s hand is above many others and it enjoys more possibilities too and if it wants to show reaction to annoying and insidious actors, they will not have a good situation and they won’t be able to gain victory on any scene of rivalry.”

“The Islamic Republic of Iran doesn’t practice cruelty but it also doesn’t accept anyone’s oppression and cruelty; therefore, it doesn’t trample on the rights of any human beings and nations, either Muslim or non-Muslim, but if anyone wants to trample Iran and its nation’s rights, he/she will receive a strong response; and thanks God, there is a capability for such a confrontation and the Iranian nation is powerful and resistant,” Ayatollah Khamenei underscored.

Meantime, Iranian lawmakers said that the Parliament is planning to investigate the stampede incident.

Mohseni Sani blamed the Saudi officials for the disorder which resulted in the death of thousands of the Hajj pilgrims, and urged the Iranian Judiciary and Foreign Ministry to pursue the case.

“The large convoy of Mohammad bin Salman Al Saud, the King’s son and deputy crown prince, that was escorted by over 350 security forces, including 200 army men and 150 policemen, sped up the road to go through the pilgrims that were moving towards the site of the ‘Stoning the Devil’ ritual, causing panic among millions of pilgrims who were on the move from the opposite direction and caused the stampede,” several Arab papers, including the Arabic language al-Dyar newspaper, disclosed the day Mina incident happened.

“That’s why the ruler of Mecca has distanced himself from the case, stressing that the issue should be studied and decided by the King,” it added.

No other source has yet confirmed the report, but observers said the revelation explains why two of the roads to the ‘Stoning the Devil’ site has been closed.

Eye witnesses said earlier that the Saudi police and security forces had closed two of the few roads to the stone column that were to be used by millions of pilgrims to do the ‘Stoning the Devil’ ritual.

He said for “unknown reasons” the paths had been closed off near the scene of the symbolic stoning of the devil ritual where the accident later took place.

“This caused this tragic incident,” he told the Iranian state television.

Eyewitness accounts said that even after incident the Saudi security and military forces closed all paths leading to the scene and the bodies of pilgrims have piled up on each other.

Others blamed Riyadh for mismanagement of Hajj ceremony, adding that many of the wounded pilgrims were dying of the hot weather conditions, which reached 46 degrees centigrade on September 24, while police and the army had closed access roads to the site of the incident making the relief and rescue operations and trafficking of ambulances very difficult.

Pilgrims present on the scene are also complaining about insufficient number of medical teams and centers. Reports said hospitals are overwhelmed by the large number of the wounded.

Twelve hours after the incident, the dead body of hundreds of those killed in the stampede were still piled up out in the streets.

Head of the Iranian pilgrims Seyed Ali Qazi Askar in an interview with the state TV after the incident complained that the Saudi officials do not allow other countries’ relief and rescue squads to help.

“They have even prevented us from aiding our own pilgrims,” he complained with surprise.

The Mina crush was the third incident in the Hajj rituals this year.

In the first incident, a crane crash over the Grand Mosque of Mecca killed over 100 and injured hundreds more two weeks ago.

Ten days before the start of Hajj this year, a construction crane crashed through the roof of the Grand Mosque in Mecca, killing 107 pilgrims. At least 238 others suffered injuries when a powerful storm toppled the crane.

A week later, a fire incident at a Mecca hotel claimed the lives of several other pilgrims.

A Saudi analyst said on the condition of anonymity for the fear of his life that the two stampede and crane crash incidents were the result of rivalries between a part of the Saudi police and security service and Saudi King Salman bin Abdulaziz Al Saud to display that the Saudi king and crown prince are incompetent and unable to handle the Hajj ceremony.

Rivalries are tough and deep among different royal families who are all descendant of the Al-Saud and see themselves entitled to the thrown. The present king is the first from Sodayri family of Al-Saudi to have ascended to power.