Home Investigations Erdogan, Obama Lied, No Surprise There to Anyone 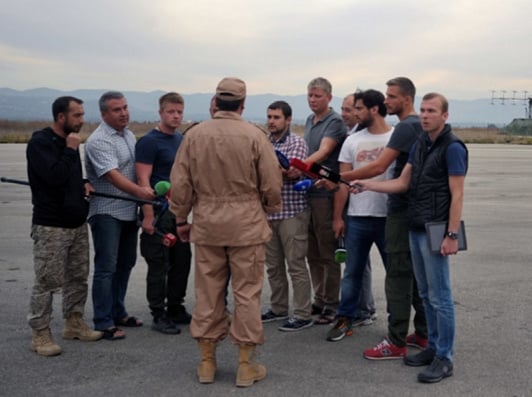 Rescued pilot of the Russian Air Force’s Su-24 jet, Captain Konstantin Murakhtin, center, answers journalists’ questions at Khmeimim Air Base in Latakia. © Dmitriy Vinogradov / Sputnik
The navigator of the Russian Su-24 shot down by a Turkish fighter jet on Tuesday insists that his plane did not cross into Turkey’s airspace, and says he was given no visual or radio warning before being fired at.

“It’s impossible that we violated their airspace even for a second,” Konstantin Murakhtin told Russia’s Rossiya 1 channel. “We were flying at an altitude of 6,000 meters in completely clear weather, and I had total control of our flight path throughout.”

As well as denying Ankara’s assertions that the plane was in Turkey’s airspace, Murakhtin also refuted Turkish officials’ claims that the pilots were warned repeatedly.

“In actual fact there were no warnings at all. Neither through the radio, nor visually, so we did not at any point adjust our course. You need to understand the difference in speed between a tactical bomber like a Su-24, and that of the F16. If they wanted to warn us, they could have sat on our wing,” said Murakhtin, who is currently recuperating at Russia’s airbase in Latakia, northern Syria.

“As it was, the missile hit the back of our plane out of nowhere. We didn’t even have time to make an evasive maneuver.”

As the plane was hit and went down in Syria, the two pilots ejected. Captain Sergey Rumyantsev was killed, with a rebel Turkmen brigade claiming they shot him to death while he was still parachuting.

Murakhtin was extracted in a 12-hour joint operation by Russian and Syrian special forces, in which a Russian Marine died.

The 39-year-old airman, who won the Top Navigator award at Russia’s biggest military flying competition last year, says he will ask to return to front-line service as soon as he is declared fit.

“I must ‘pay back’ the debt for my captain,” said Murakhtin.