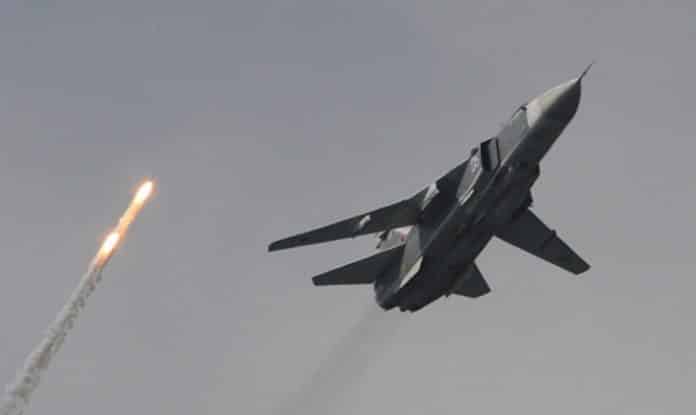 The Russian Aerospace Forces have conducted more than 130 sorties over the past three days and hit 449 terrorist targets in eight Syria’s provinces, the Russian Defense Ministry said Thursday.

“Outside the town of Al-Qaryatein, in the province of Homs, a Russian Su-24M bomber destroyed a grounded ammo depot. A pinpoint strike by an OFAB-250-270 air bomb explosives detonated, and the depot was totally destroyed.”

He underscored that outside the town of Zaitan in the province of Idlib a squadron of Su-25 ground attack jets carried out airstrikes against groups of al-Nusra Front militants.

The Russian aviation continued to carry out airstrikes against oil refining facilities of the Islamic State (ISIL) terrorist group in Syria, spokesperson for the Russian Defense Ministry told journalists.

“On November 24, a Russian Su-34 bomber conducted an airstrike against a motorcade of oil-loading trucks and oil refining and storage facilities near the oil fields in northern and eastern Syria, in the province of Deir ez-Zor and Raqqa,” he said.

According to the Defense Ministry, armed groups of militants blocked near Tel-Bissa and ar-Rastan continue to sustain losses, due to the airstrikes.

He noted that on the directions of Mkhin and Al-Quaryatein the militants stepped back by four-six kilometers.

“Today, we’re once again demonstrating, with the use of objective video monitoring data, the results of the combat operations of our aviation against terrorist positions,” the spokesperson said.