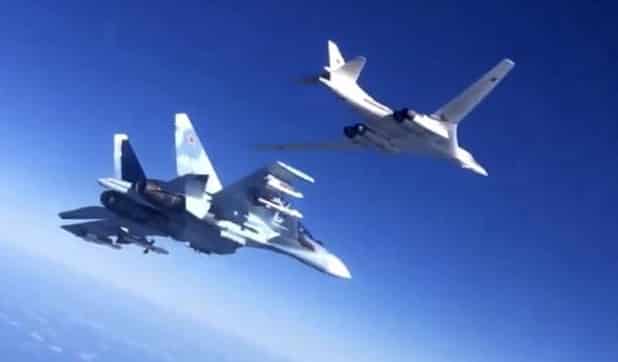 War-like situation has been created between Russia and Turkey after the latter shot down a Russian fighter jet, Su-24 combat aircraft, near the Syrian border on Tuesday.

Stand of Ankara is that before shooting it down, it issued repeated warnings that the plane was in its airspace. Moscow said that aircraft was shot down over the territory of Syria by an air-to-air missile from a Turkish F-16 jet. It fell in Syrian territory, bordering Turkey. One of the pilots, who survived stated that no warning was given.

Russian President Vladimir Putin who had called the incident, “a stab in the back” said on Thursday that the United States knew the time and flight path of a Russian jet, and should have informed Turkey, its coalition ally. The US has an agreement with Russia to avoid aircraft collisions over Syria where both countries are conducting bombing campaigns.

Putin also said, “If it was an American aircraft, would they have struck…what we hear instead is they have nothing to apologize for…no promise to punish the culprits of this crime…it was not possible for Turkey not to have known that the plane was Russian, as suggested by Turkish President Recep Tayyip Erdogan.”

On the other side, Turkish President Erdogan said that his country would not apologize for downing the jet, and “those who violated our airspace are the ones who need to apologize.”

Russia’s Defense Ministry announced that it had suspended all “channels of interaction” with Turkey’s military, including a hotline set up to avoid clashes in Syrian airspace.

In this regard, Russian Foreign Minister Lavrov criticized NATO for failing to express condolences to Russia over the incident, after a NATO meeting called by the Turks. He elaborated that similar reaction came from the European Union.

Here question also arises that major NATO countries which called on Ankara and Moscow to show restraint and to resolve the issue through negotiations or by utilizing diplomatic channels will join its NATO member Turkey in case of Russian prospective military action.

Particularly, American President Barrack Obama who has always displayed contradictory approach by following double game in relation to Syria and ISIS, said, “it was important for the Russians and Turks to talk to each other and take measures to discourage escalation…like every country, Turkey has the right to defend its territory and its airspace.”

However, it seems that assurance of NATO or especially of the US has emboldened Turkey to take strong stand against Russia. But, despite Russian military action against Turkey, NATO may not drag itself into conflict with Moscow which could result into nuclear war.

It is notable that after the World War II, nuclear weapons were never used, and were only employed as a strategic threat. During the heightened days of the Cold War, many crises arose in Suez Canal, Korea, Cuba and Vietnam when the US and the former Soviet Union were willing to use atomic weapons, but they stopped because of the fear of nuclear war which could eliminate both the super powers. Therefore, the two rivals preferred to resolve their differences through diplomacy.

Similarly, many occasions came between Pakistan and India, during the Kargil crisis, Indian parliament’s attack by the militants, and particularly in 2008, in the post-Mumbai terror attacks when New Delhi started a blame game against Islamabad in wake of its highly provocative actions like mobilization of troops. Pakistan had also taken defensive steps to meet any prospective aggression or surgical strikes by New Delhi.

But, India failed in implementing its aggressive plans, because Islamabad also possesses atomic weapons. Despite it, fear of atomic war continues between both the countries, as Indian Prime Minister and leader of the ruling fundamentalist party BJP Narendra Modi intended to implement the doctrine of limited war or conventional war with Pakistan in relation to the Indian-held Kashmir which remains the nuclear flashpoint.

Political strategists agree that principle of deterrence also known as ‘balance of terror’ is a psychological concept which aims to affect an opponent’s perceptions. In nuclear deterrence, weapons are less usable, as their threat is enough in deterring an enemy who intends to use its armed might.

In this context, a renowned scholar, Hotzendorf remarks that nuclear force best serves the interests of a state when it deters an attack.

It is of particular attention that on July 31, 2006, the US declassified documents disclosed, “During the past year, the Bush White House was seriously considering a “nuclear option” against Iranian nuclear sites understandably…these scenarios are not without historical precedent. From time to time during the Cold War and after, American officials tried to find ways of making nuclear weapons usable, not only for deterrence against Soviet attack but as “tactical” weapons in local conflicts…recently declassified documents reveal that during Richard M. Nixon’s first year as president, advisers on his White House staff were willing to revisit the question of whether to employ nuclear weapons in Vietnam.”

A complete study of the declassified documents show that President Nixon’s national security adviser Henry Kissinger who believes in power or use of force including nuclear threat for bringing the adversary to favourable bargaining,  had advised Nixon to use atomic weapons or its threat to compel North Vietnam and its Soviet allies to conclude peace on America’s terms.

Notably, in 2013, The US was determined to attack Syria, when it accused Syrian government of using chemical weapons on the rebels. America’s Navy was expanded in the Mediterranean. On the other side, Russia which also sent its warships, made it clear that CIA-supported rebels used chemical weapons. A war-like situation arose between both the countries, but defused when America’s allies interfered and President Obama had to withdraw from his illogical stand.

In this respect, Huntington’s book, “The Clash of Civilizations and the Remaking of World Order” which points out “the clash of civilizations” as the “battle lines of the future…the next world war” also indicates (In one way or the other) that any fault-line war could involve the major powers.

Nevertheless, even if, the present Russia-Turkey crisis is being resolved by the mediatory efforts of the big countries (Whatever the situation in the coming days), the clouds of nuclear war will keep on hovering, unless the real issue of Syria is settled.

As a matter of fact, since the Russian President Vladimir Putin has exposed the secret aims of the US fake global war on terror by striking the strongholds of ISIS in the northern Syria and support of CIA and Israeli Mossad to the ISIS terrorists, President Obama is confused.

Hence, President Obama who had agreed to keep the Syrian President Assad in power (Contrary to previous demand of regime change) and not to allow ISIS militants group to reign in Syria has backed out from his stand.

Recently, he stated, “The U.S. won’t in any circumstances agree to a political settlement for the civil war in Syria that leaves Assad in power…there is no way to unite the country’s various factions for the fight against Islamic State.”

It is noteworthy that on Thursday, in a joint press conference in Moscow, President Putin and French President Francois Hollande said that they agreed to exchange intelligence data on ISIS and other terror groups in Syria to increase the effectiveness of their air campaigns to target only Islamic State and similar Jihadi groups.

Hollande who also stressed the importance of Moscow, playing a key role in the political transition in Syria reiterated the Western position that Syria’s President Assad should have no place in the country’s future. Putin again spoke about the need for a broad international coalition against terrorism, but clarified that “Russia is ready to act on its own if the idea does not receive wider support from the West.”

But, analysts still hopes that a global alliance could emerge to root out ISIS in that region. In case, it does not take origin, Paris could continue its air campaign on ISIS militants and may join Russian coalition; afterwards, even America’s Western allies may also join it, while playing a reconciliatory between the US and Russia for a larger alliance.

In fact, in the post-November 13 phenomena of Paris terror attacks, France and other European countries want a broader alliance including Russia to eliminate ISIS in Syria and Iraq. But, the US which had backed the ISIS militants, and now, assist the moderate terrorists (Rebels) is using delaying tactics, because other major countries will also want to settle the Israeli-Palestinian conflict. And Tel Aviv would not agree except employing similar tactics which thwarted previous peace-processes.

In this connection, the Swedish Foreign Minister Margot Wallstrom’s statement, hours after the Paris attacks caused a stir in Jerusalem, as she said that “to counteract the radicalization, we must go back to the situation in the Middle East of which not the least the Palestinians see that there is no future: we must either accept a desperate situation or resort to violence.”

It is also noteworthy that by manipulating the tension between Moscow and Ankara and vicious circle of terrorism in Syria, Israel could cause a conventional war between the sovereign states, which could culminate into nuclear war, enveloping the big powers.

Nonetheless, unless resolved, like Kashmir, Syria will remain the nuclear flashpoint. Therefore, it is suggested that major atomic powers must act upon the principles of ‘balance of terror’ to avoid any atomic conflict which could culminate into international suicide in wake of drastic phenomena of the aftermath of Paris terror attacks. They must settle both the Russia-Turkey dispute and the Syrian crisis through talks.

Sajjad Shaukat writes on international affairs and is author of the book: US vs Islamic Militants, Invisible Balance of Power: Dangerous Shift in International Relations. Email: [email protected]