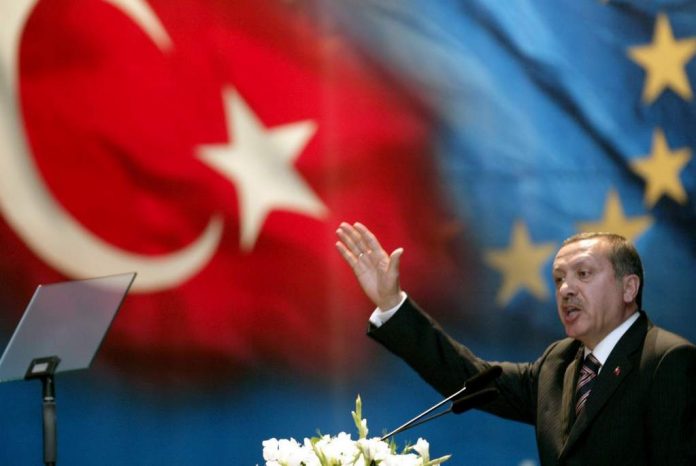 [ Editor’s Note: We may be seeing the beginning of the end for the Erdogan era, but it will by no means be a quick and easy task. As with Israel, the US, NATO and EU have put the Zionists in a position to release some damaging information they would never want the public to know, not the least of which is the fraud our “fighting nuclear proliferation” has been.

Gordon will describe some of the nasty details below.

We have already published Israel’s long history of nuclear espionage in the US, some of it given the green flag, as when Johnson “allowed it” to divert US material to build its own nuclear weapons.

That was followed by the Bush-era pilfering of old US weapon stockpiles, something that could not have been done without the complicity of the highest officials, and they are still alive and well. None fell down the stairs or killed themselves.

These disasters are considered so devastating to the public trust in government that they are highly classified as being a “threat to the nation”, when they actually do just the opposite by keeping the country vulnerable to a treasonous leadership class that can hide the worst of what it has done behind security classifications.

For Germany’s part, the subsidies it has given Israel over the years for its Dolphin subs should have triggered more mainstream media investigative stories as to whether Israel was providing weapons-grade material in return, or even finished weapons. Western democracies are completely undermined when such serious events are kept hidden from us by our own security regimes sworn to protect us.

To my knowledge no major public-civic institution has dared take this bull by the horns, an example of our Founding Fathers’ warning that the Republic they had given us would not be maintained without the public being able to know what their government was involved in, and why.

Despite all that VT has done to fight the monster, we still have a 100% corporate media blackout; and not a single foundation, veterans or philanthropic group has lifted a finger to help us. All has been done via individuals, many who have been in the belly of the beast and understand the seriousness of the threat.

We have come a long way since Richard Nixon’s White House counsel John Dean (no relation) said, “I told the president that there was a cancer growing on the presidency, and if it was not removed, the president himself would be killed by it.” That problem was similar but minor to what we face now.

We have a cancer growing on our Republic that is killing it… or maybe it already has, and we are too afraid to admit it, as we could never escape contributory blame for it by doing almost nothing to stop it.

The bankster meltdown, unregulated derivatives trading, the US preemptive strike defense policy, and our military being subverted into an economic gangster enforcement arm were all plenty of signs that radical surgery was need. Obviously, someone agreed that major surgery was needed, but they (Bush, Clinton, Bush) ended up doing it on us.

Santa is not coming to help us. If we don’t pony up to the table soon, does anyone out there really think our kids and grandkids are going to able to turn this around? Of course not. And that means we are just abandoning them to a fate they were not responsible in creating… Jim W. Dean ]

America and Israel, in playing up to Erdogan, perhaps even underestimating his grasp but more likely overlooking his long history of mental instability, have turned Turkey into a de facto nuclear power. For those who aren’t afraid, its time it sunk in.

The US cut a deal with Turkey long ago, they are a nuclear power. As a Cold War trade off with Turkey, America was allowed to place nuclear missiles in Turkey and station nuclear bombers there as well.

Primitive Jupiter nuclear missiles in Turkey were what really led to the Cuban missile crisis of 1962, what pushed Russia to positioning nuclear weapons in Cuba.

Well, the problem is back again, back in spades. Not only are there American nuclear weapons in Turkey, with up to fifty B61 nuclear bombs in Erdogan’s hands with limited oversight, Turkey is that other nuclear power in the Middle East along with Israel, and the two of them have been working closely together since the 1940s.

It gets worse, and we haven’t even scratched the surface. You see, these B61 bombs, dangerous as they are, have been slated for what the nuclear non-proliferation community has termed an illegal modification. From the Guardian:

“… In non-proliferation terms however the only thing worse than a useless bomb is a ‘usable’ bomb. Apart from the stratospheric price, the most controversial element of the B61 upgrade is the replacement of the existing rigid tail with one that has moving fins that will make the bomb smarter and allow it to be guided more accurately to a target. Furthermore, the yield can be adjusted before launch, according to the target.

“The modifications are at the centre of a row between anti-proliferation advocates and the government over whether the new improved B61-12 bomb is in fact a new weapon, and therefore a violation of President Obama’s undertaking not to make new nuclear weapons. His administration’s 2010 Nuclear Posture Review said life extension upgrades to the US arsenal would ‘not support new military missions or provide for new military capabilities.’

“The issue has a particular significance for Europe where a stockpile of 180 B61s is held in six bases in five countries. If there is no change in that deployment by the time the upgraded B61-12s enter the stockpile in 2024, many of them will be flown out to the bases in Belgium, the Netherlands, Germany, Italy and Turkey.“

But there is more to this story, much more. There is a reason these bombs are being modified, made more accurate, more dangerous. You see, they are carried on the F16, an aging but still lethal fighter bomber.

In early 2015, Turkey had 117 of its F 16 aircraft modified. These upgrades included avionics, electronic warfare and targeting, but also included upgrades for some of their aircraft to nuclear capability.

The United States keeps its nuclear inventory in Turkey at Incirlik Air Force Base, where specially modified NATO F16s are intended to carry these weapons against Russian cities. However, by agreement, none of America’s specially modified planes are actually stationed in Turkey.

The “work around” that Erdogan and select NATO commanders found was a simple one. As Turkish and Israeli pilots had always trained together against the “common enemy,” that being Iran, Israel could train Turkish crews to deliver the newly modified and much more lethal B61 guided warhead, and Israel could complete the modification on some of the upgraded Turkish planes, believed to be 20, to full nuclear capability.

These aircraft with targeting intelligence stolen from the US by Israeli spy Jonathan Pollard, are ready to hit Russia at any time or, as part of a “yet to be determined” cabal of other “unannounced nuclear states,” such as Saudi Arabia, Qatar, Israel or even Germany, could prove a “first strike” capability in a scenario right out of Dr. Strangelove.

A second “work around” involves Israel marketing nuclear weapons to Turkey, Saudi Arabia, Germany and others, with an IAEA (International Atomic Energy Agency) investigation halted in 1998, headed at that time by IAEA investigator Jeff Smith and CIA agent Roland Carnaby. Smith is now an editor at VT.

Carnaby was murdered by an Israeli agent in Houston, Texas, in April 2008. The IAEA offices in Houston for this project were also the offices of former President George Herbert Walker Bush, who worked directly with Smith and Carnaby on this project, which involved the theft of 350 nuclear weapons “pits.”

Along with the “pits,” the core of every nuclear weapon, the investigation also covered the theft of intelligence required to “match” the pits for re-machining and refurbishment, an investigation that led to Washington’s highest levels.

There was a time when the public believed that leaders such as Netanyahu, Merkel or Erdogan were incapable of such folly. That time is long gone.

With Barak Obama as president of the United States, such a scenario is unlikely, but Obama will be leaving office soon. Taking his place will either be Hillary Clinton or one of a bevy of Republican candidates, such as Donald Trump or Ted Cruz, each as mad as Erdogan or even Netanyahu — individuals who have long demonstrated personality disorders of the highest magnitude, malignant narcissism, paranoid delusions and utter grandiosity.

Were the scenarios presented above to pass the hypothesis “sniff test,” there would have to be evidence of planned escalation of tensions, of collusion between the “partners” and control of the political processes in the US and Turkey.

There are other less publicly known issues that support our hypothesis as well, less well known but far more threatening:

The Russian response had been to bolster security on the ground, never imagining that Turkey would face Russia’s wrath by openly downing one of their planes.

Thus, when we speak of the madness of Erdogan, we feel we have a strong confirmation.

Gordon Duff is a Marine combat veteran of the Vietnam War that has worked on veterans and POW issues for decades and consulted with governments challenged by security issues. He’s a senior editor and chairman of the board of VT, especially for the online magazine “New Eastern Outlook”.