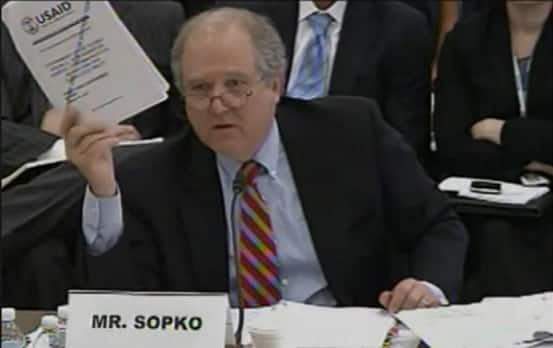 Head of oversight body Sigar asks why US government staff accommodated in special private ‘villas’ instead of staying on defence or diplomatic bases.  John Sopko, head of Sigar, has questioned $150m spent on US staff accommodation in Afghanistan.

The Pentagon lavished nearly $150m of taxpayer money on villas with private security, flat screen TVs and three course meals for “special events” for US government staff in Afghanistan, an official watchdog has found.

The defense secretary, Ash Carter, is under pressure to explain why the Task Force for Business and Stability Operations (TFBSO) spent about a fifth of its budget on external residences in Kabul instead of accommodating the employees at American military or diplomatic bases.

The demand from John Sopko, head of the Special Inspector General for Afghanistan Reconstruction (Sigar), comes just a month after he questioned the Department of Defense’s outlay of nearly $43m “for what is likely to be the world’s most expensive gas station”.

“Based on allegations we have received from former TFBSO employees and others, today I am writing to request information concerning TFBSO’s decision to spend nearly $150m, amounting to nearly 20% of its budget, on private housing and private security guards for its US government employees in Afghanistan, rather than live on US military bases,” states a letter addressed to Carter.

In addition to security, private contractors gave support services at task force facilities, Sopko notes. “For example, Triple Canopy provided TFBSO personnel with queen size beds in certain rooms, a flat screen TV in each room that was 27 inches or larger, a DVD player in each room, a mini refrigerator in each room, and an ‘investor villa’ that had ‘upgraded furniture’ and ‘western-style hotel accommodations’.

“In terms of food, Triple Canopy was required to provide service that was ‘at least three stars’, with each meal containing at least two entrée choices and three side order choices, as well as three course meals for ‘special events’.”

If the employees had instead lived at Department of Defense facilities in Afghanistan – where housing, security and food service are routinely provided at little or no extra charge – it appears that taxpayers would have saved tens of millions of dollars, Sopko contends.

Sigar estimates that for 2014 a task force staff of 10 would have paid approximately $1.8m to live at the US embassy. Yet former task force officials told Sigar that the $150m spent on its accommodations in Afghanistan supported “only a handful” and “no more than five to 10” staff most of the time.

The letter says TFBSO’s decision not to live on military bases may have been made by Paul Brinkley, former deputy under secretary of defense and TFBSO’s first director. It quotes him as explaining: “Our goal was to get businesses running and to encourage private investors and corporations from outside of Afghanistan to engage in the country either as trading partners or as investors.

“Wherever possible, we avoided depending on the military. We were part of their mission … but we avoided living on military bases whenever possible. The goal was to show private companies that they could set up operations in Afghanistan themselves without needing military support.”

But Brinkley is no longer a government employee and did not cooperate with requests for information, it added. Sopko asks if a cost-benefit analysis was carried out in advance and, if so, requests that he be provided with a copy.

Following his concerns over the $43m gas station in Sheberghan, which opened in 2012 to show that compressed natural gas could be used in cars in Afghanistan effectively, he said on Wednesday: “We are concerned that this may be yet another example of US government officials not looking out for the American taxpayer.”

Sopko added: “In order to protect the American taxpayers’ dollars, DoD [Department of Defense] must fully cooperate with Sigar’s oversight work, and government officials who waste taxpayer funds must be held accountable.”

Nearly $110bn has been appropriated in Washington for reconstruction in Afghanistan since 2002 when, in the aftermath of the 9/11 attacks, US forces drove the Taliban from power for harbouring the terrorist network al-Qaida.

Neil Gordon of the Project On Government Oversight said: “The report is very short on detail, but it seems like a colossal waste of taxpayer money. Sigar raises good points about how having task force staff instead reside in US military or diplomatic facilities would have saved lots of money and improved coordination between the three agencies.

“Such extravagant spending seems to be a troubling pattern for the task force, which also gave us the $43m gas station debacle. We’re glad both Sigar and Congress are pushing DoD for answers.”

Army Lieutenant Colonel Joe Sowers, a Department of Defense spokesman, said: “We have received the recent letter from Sigar and will respond.”