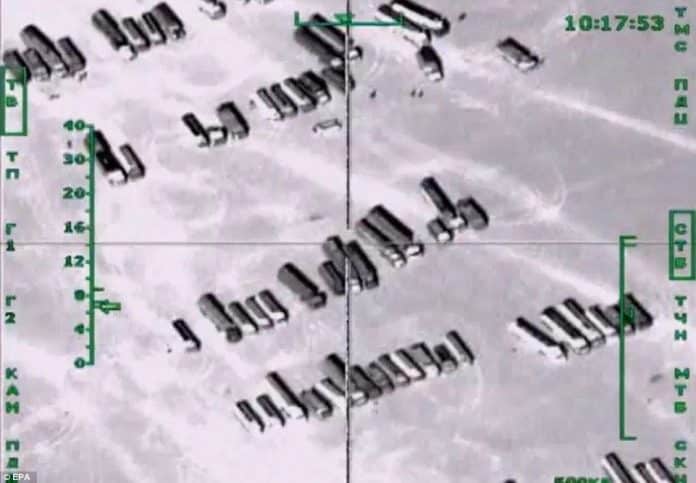 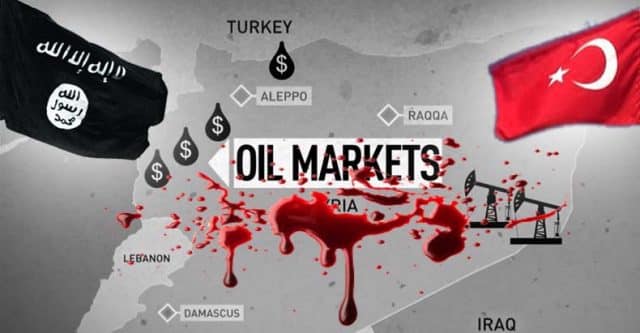 [ Editor’s Note: VT’s extensive Syrian war coverage is getting noticed by Russian media more. New Eastern Outlook has a wide domestic readership and our VT articles published there are routinely monitored by the Russian government for all the goodies that can be found in them from time to time.

We see a pattern developing on the Russian-Turkey strategy. Putin and Lavrov have not wanted to dump everything they have on Erdogan and his gang, choosing to drip it out a bit at a time to keep it in the news headlines.

The Russian Defense Ministry briefing on Wednesday ended with a notice that there would be another major one next next week going into things like ISIL training camps inside Turkey, and more “new information”.

Turkey is responding with the usual denials and has started blocking Russian ship traffic through the Bosphorus despite its being a violation of the international navigation treaty. So Erdogan continues his roll on playing the international bad boy. The Pentagon has gone down into the swamp with him by denying it knows anything about Turkey laundering ISIL oil. So Team America seems to be solidly onboard the ISIL funding program via our colorful NATO ally.

Meanwhile, ever cooperative Russia has offered vetted FSA units air cover for any offensives they night want to launch against ISIL positions. The US coalition has never offered that to the Syrian Army despite its doing the major ground combat work. The US is going to come out of the mess just covered in mud… Jim W. Dean ]

Turkey and the Islamic State’s collaboration on oil smuggling only scratches the surface of a much deeper and broader criminal partnership, one that oversees a variety of illicit activities ranging from human trafficking to financial scams with operations that stretch from Ankara to Amsterdam, experts told Sputnik.

Russian Deputy Defense Minister Anatoly Antonov said on Wednesday that Turkey is the main consumer of illegal oil from Syria and Iraq, accusing Turkish President Recep Tayyip Erdogan and his family of direct involvement in the oil business of the Daesh, also known as ISIL/The Islamic State.

“The Erdogan family and their friends run organized crime in Austria, in Germany, in the Netherlands… which includes human trafficking on a massive scale, narcotics trafficking [and] credit card fraud.”

One year ago today, Duff noted, he delivered this very same message to Syrian officials during a conference in Damascus, outlining the wide range of criminal enterprises operated by the Erdogan and Daesh mafia syndicate.

With respect to the illicit oil trade, he explained, Daesh collaborates with a trucking and marine transportation company owned by Erdogan’s son, Bilal, that smuggles oil from Syria and Iraq into Turkey for export abroad.

“Now there are a series of pipelines across Turkey, more than anyone knows, some closer to the Iraqi-Syrian border than the typical drawings you’ll see, that offload into the Mediterranean and take oil to places like the United States for sale,” Duff claimed.

On Monday, Russian President Vladimir Putin said Russia had received additional evidence that oil from fields controlled by Daesh, which is prohibited in Russia, were being transported to Turkey on an industrial scale.

Elizabeth Gould and Paul Fitzgerald, authors of highly-acclaimed books on US foreign policy, told Sputnik that Moscow’s evidence against Turkish officials and Erdogan is both substantial and convincing.

“Turkey has been a major crossroads for narcotics, weapons and human trafficking to Europe for decades,” Gould and Fitzgerald said. “If Washington needs friends like this it’s getting what it deserves.”

Erdogan responded to Russian accusations of his family’s involvement in IS oil smuggling by claiming he would resign if unquestionable evidence on the matter was presented.

On Wednesday, Russian Foreign Minister Sergei Lavrov said Russia would hand over to the United Nations and all interested countries solid proof of Turkey’s involvement in illicit oil trade with terrorists.