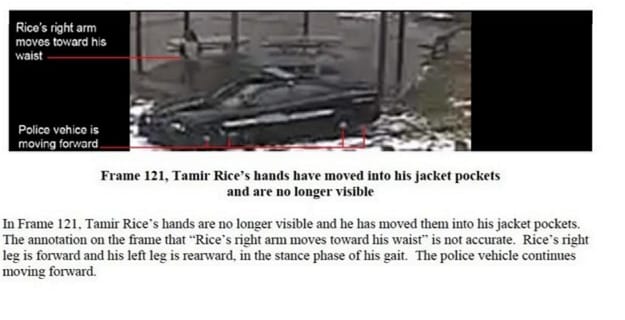 Editor’s note:  After examination by forensic experts at VT including former senior FBI and military intelligence personnel, we believe a criminal case for murder with “special circumstances” needs to be opened against the officers involved and those who participated in the cover up.

A kinetics expert says Tamir Rice had his hands in his pockets when he was shot and was not reaching for his toy gun, flatly contradicting what experts hired by the prosecutor’s office have found. The new report comes from attorneys representing the Rice family in a civil lawsuit.

An expert in biomechanics and kinetics has determined that Tamir Rice’s hands were in his pockets and never came out of them when he was shot by Cleveland police officer Timothy Loehmann last December.

The expert also found that Tamir’s toy gun was not visible to either Loehmann or his partner, Frank Garmback, and Loehmann shot Tamir less than a second after exiting the patrol car, not the 1.7 seconds that other experts have found.

Jesse L. Wobrock, an expert hired by attorneys representing Tamir’s family in a civil lawsuit, formed his conclusions after studying enhanced video released last week by Cuyahoga County Prosecutor Tim McGinty. Subodh Chandra, a Cleveland-attorney on the Rice’s legal team, released Wobrock’s report late Friday night along with updated reports by two other experts, who also studied the enhanced video and maintain their original positions that the shooting of Tamir was not justifiable.

Wobrock found that in the split second before the shooting, Tamir raised his right hand – while still in his jacket pocket –in a defensive posture.

Because Lehmann fired one second after leaping from the car, Wobrock concludes, Loehmann had to have unholstered his gun before leaving the car because one second is not enough time to draw the gun and fire it.

Was with the Charlie Hebdo farce in Paris last summer, the Tamir Rice killing in Cleveland, November 2014 doesn’t stand up under any analysis.  With Hebdo, we expected dozens of YouTube gun junkies to head for the scrapyard and start pulverizing concrete sidewalk chunks with their AK’s.  Never happened, not sure why. Nobody ever takes the “low hanging fruit” when it comes to debunking phony terror attacks or street theatre.

Let’s go after the Tamir shooting and put it to rest quickly.  The video above is both purposefully “compressed” to reduce frame rate and has the resolution reduced as well, almost identical to the parking lot 9/11 video at the Pentagon showing a Tomahawk cruise missile slamming into the headquarters of the DOD.

First thing to put to bed is the issue of the gun.  From the video, you can see that less than 2 seconds elapsed from the time the car stopped to the shooting.  In this time, police open the door, draw guns, identify the threat and react while, according to police testimony, shouting out three warnings.  We have reason to believe that Tamir was holding an airsoft pistol.  First, let’s differentiate between a “pellet gun” and an airsoft pistol.  Be advised that airsoft pistols are extremely common and when a kid is in a park running around with a toy gun, it is usually a nearly totally harmless airsoft gun that is not really able to put your eye out.  This is the ammo, actually “prills” as opposed to “pellets.”

On the other hand, this is a “pellet:”

Do you think the failure to differentiate between the two is an accident?  Pellets kill small game, stupid kids shoot each other with airsoft for amusement when parents aren’t watching.

We are also told that Tamir had “modified” his airsoft pistol, actually belonging to another child we are told, by removing the orange barrel marker.  Here is a common airsoft pistol from Walmart.

Did the officer in the video make any attempt to recognize the type of toy the child was carrying?  Take a careful look at the toy above.  It is reasonable to assume that the issue of “orange marker” or not are placed before us in hopes we don’t actually look at the video and learn about how some airsoft weapons are identified.

This is a common airsoft rifle:

So, thus far, we have police barreling in, but wait, let’s talk about that.

If police approach a potential armed suspect, it is an established procedure to stop the car more than 35 yards away in order to take advantage of body armor, the protection of a vehicle to shield from bullets and the possibility that trained police officers might be better armed and better trained.  As we see in the video, better armed for sure, as they were not carrying toy guns.

If this were a real gun and Tamir were older, he could legally “open carry” without a concealed weapons permit as allowed by Ohio law.  Were he to draw the weapon in the presence of someone else without reason, he could be charged with disorderly conduct.  Were he legally carrying a concealed weapon and drew it for no reason, he would be guilty of misdemeanor “brandishing” according to Ohio law.

Typical punishment were Tamir waving a real gun around would have been a stern warning from a judge.

Then again, the police never checked to see if Tamir was alone.  If he did have friends and they did have real guns. the police would have been killed in seconds like happened in Brooklyn.  Did they fail to check because they weren’t concerned, real guns, other shooters, “pedestrians?”

Is it a supportable hypothesis that the approach seen in the video would and could only be used for shooting a lonely kid with a toy gun who was a threat to no one at all?  We will make that case, successfully I believe.  See if you agree.

A trained police officer gains control of the situation by calmly addressing the “potential suspect” and asking them to drop what they are carrying in their hands and lay on the ground with their hands at their side.  In most such cases, that process takes between 5 and 10 minutes.  People stopped in public who are acting “unusual” are usually mental patients, disgruntled veterans, on drugs or alcohol or any or all of the above.

An officer who has acted properly is at minimal risk and has time to ascertain and control the situation, taking into account reality and television differ most of the time.

The only possible reason to act otherwise would be if the officer had forgotten all training and believed he was in a poorly written TV police drama.  This seems to be the case.

There are some other issues as well.  Supposedly we had numerous calls including one where someone said a woman had a gun stuck in her face.  Toward that end, we have video showing a toy gun being pointed.  Here is a frame depicting “a woman having a gun pointed in her face.”

Now, lets take a look at where the toy gun is actually being pointed.

First, I would have you note that the position of the alleged “toy gun pointer” shows that if someone were there on a cold November day, they might likely be as far as 200 meters away.  We are going to go over this issue and others.  Suffice it to say, this is perhaps your first view of the actual scene.

We will examine more issues, including possible witness point of vision and foot traffic patterns through what you will clearly note, is the “middle of friggin’ nowhere.”

Let’s see where the witnesses were who called in.  There is virtually NO foot traffic in this area and where Tamir was playing is not visible from sidewalks.

This is the closest sidewalk to where Tamir was shot, taken in the middle of a summer day. It would nearly be impossible to tell an elephant from a rabbit even in full light, based on cover and distance.  Look for Tamir in the photo?  See a gun?  He’s not there but he could be, if he weren’t dead already.  Nobody could tell, and this is the closest viewpoint.  Were are going to take a look at this from above and identify how there could be a witness, perhaps one with a Hubble quality telescope:

Here we identify several issues.  Let’s think about people who would be walking past Tamir.  As you can see, no one lives between Tamir and the CVS Pharmacy where lotto tickets, beer and cigarettes can be purchased. Examining patterns of home and automobile ownership, demographic patterns, for the two adjacent streets makes for an extremely low possibility anyone walked near Tamir.  There is no place to go.

Here is a street scene from the opposite side.  These are the homes and cars of people who drive to real places for the things they need, not people who shamble down to the corner for “cigs and malt liquor” before sleeping it off behind the school.

Line of sight from this side provides no visibility, even if the gazebo didn’t obscure vision:

We will take a look at the retail to the right of the CVS Pharmacy, the only potential place a pedestrian could be going.

And for the other side of the street:

What have we established here?

Most certainly that there are no issues of him having altered a toy gun to look like a real gun when nobody made any attempt in the first place.

The video isn’t a police operation at all, it looks like a gang hit.  If there were people around, the police would have endangered them for sure, meaning the police knew no one was around.

That makes this murder.

If these are Cleveland police, they would have figured out quickly that their “witnesses” were fabricators right out of McKinney, Texas or Jade Helm.

Nobody saw anything.  Then again, what if someone were there?  Why would they be out in freezing cold, between nowhere and nowhere else, approaching a child with a toy gun?  What could their reasoning be?

Shouldn’t they, if they existed, be questioned?

“Why were you in a hidden alcove at the recreation center?  Where were you going?  Where did you come from?”

The rest of us can see that where Tamir was playing is between nowhere and nothing, can’t be seen from a sidewalk, not from a home, not from a car, somewhere nobody who wasn’t “up to no good” had any reason to be…unless they were a 12 year old playing with a toy gun.