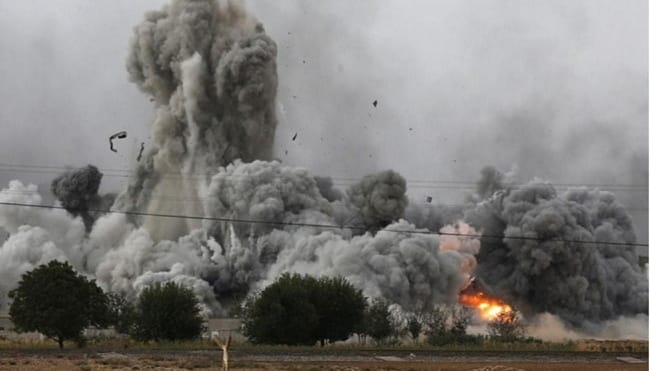 Russian warplanes have targeted the ISIS strongholds across Lebanon’s northeastern border which caused hundreds of militants to be killed, state media has reported.

The National News Agency said warplanes were bombing ISIS (Daesh) targets in Wadi Mira, Martbaya and Zamarani, in the northern Qalamoun region along the Syrian-Lebanese border.

The targeted areas, located on the far eastern outskirts of Lebanon’s northeastern town of Arsal, were sites of major battles between militants and a Hezbollah-Syrian army force earlier this year.

The allied forces had launched an offensive in Qalamoun in May against rebel groups, including the Nusra Front and ISIS. The offensive began in the Qalamoun’s southern region and gradually pushed north toward Arsal’s eastern outskirts.

Hundreds of militants were killed or ousted from their bases in the offensive, which stopped short of completely wiping them out, presumably due to concerns that the 25 Lebanese soldiers and policemen held by the militants in that area could be killed.

The Nusra Front at the time had warned that the lives of the 16 hostages it was holding would be at risk should Hezbollah and the Syrian army advance to the territory under its control.

Those hostages were freed on Tuesday in a swap deal which also saw the release of 23 militants from Lebanese and Syrian prisons, but ISIS is still holding another nine hostages on Arsal’s outskirts.

Russia began launching airstrikes in Syria on Sept. 30 following a request from Damascus. Pro-government forces had witnessed a series of blistering battleground losses across the country prior to Russia’s intervention. Albawaba.com reported.