Home Government Did Saudi’s Buy Kurds to Ally With ISIS? 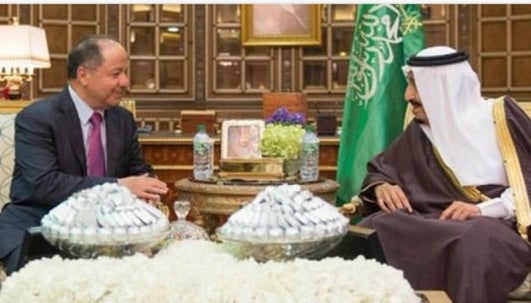 TEHRAN (FNA)- President of Iraq’s Kurdish Regional Government Masoud Barzani has received $8bln from the Saudi government in the form of financial aid during his recent visit to Riyadh, a senior member of the Movement for Change (Bizutnaway Gorran) at the Iraqi parliament revealed on Wednesday.

“Barzani has received financial aid amounting to $8bln during his recent visit to Riyadh which will be distributed among his family members and high-ranking officials in Kurdistan region,” Sarvah Abdolwahid said in an interview with the Iraqi al-Alam al-Jadid daily.

Noting that the Kurdistan regional government always claims to have financial problems, the legislator said, “The region faces no financial crisis; the only problem is that the wealth of the Kurdish nation is stolen (by the statesmen).”

Abdolwahid underlined that the Iraqi Kurdistan region’s revenues only from customs duties and tourism are enough to pay the salaries of the region’s employees and workers.

After the death of former Saudi King Abdullah bin Abdulaziz al-Saud on January 23, this was the first visit of Barzani to Riyadh.

He also held a meeting with Saudi Minister of Foreign Affairs Adel al-Jubeir to discuss bilateral ties and other issues of mutual interest.