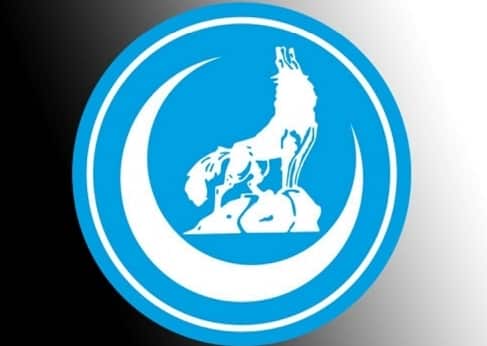 TEHRAN (FNA)- Ukrainian nationalists and activists of the so-called Crimean Tatar Mejlis recently began to receive reinforcements in the face of right-wing members of the Turkish terrorist group ‘Grey Wolves’.

One of the organizers of the blockade of Crimea, Lenur Islyamov, on his blog posted a photo with the Turkish fighters; “Turkish patriots from the organization Bozkurtkar Turk Ulkuculeri, people call it — ‘Grey Wolves’, visited us at the blockade. The blockade is compressed”, — signed ‘Islyamov’.

‘Grey wolves’ (Bozkurtlar) appeared in the late 1960s as the youth wing of the far-right “Nationalist Movement Party”, which proclaimed the goal of uniting all Turkish peoples in one state. Colonel Alparslan of Turkey led the organization, and was an open admirer of Hitler and Nazi ideas. The Turkish state, regardless of whether it has formally forbidden the ‘Wolves’ or allowed them to emerge from the underground, actively used them to suppress opposition and promote foreign policy. On record there are hundreds of crimes by ‘Bozkurtlar’. They killed trade unionists, activists of the Kurdish movement, the Communists, protesting journalists and officials and staged a massacre on May Day demonstrations in Istanbul in 1977. It is believed that the crimes organized by the “wolves” death squads in the Kurdish areas stand in thousands of civilians.

Logo of the Grey Wolves

Active Grey Wolves also operated abroad. They staged an assassination attempt on the Pope in 1981. Now they are actively collaborating with the terrorist underground in the Xinjiang Uygur autonomous region of China, considering it part of the ‘Great Turan’. In August of this year, ‘Wolves’ staged an attack in the capital of Thailand, in which 19 people died and 123 were injured. In Europe the wolves organize mass rallies in Turkey, they sometimes kill people in the Old World of the Kurds, and defile the monuments to the Armenians and beat up Chinese tourists. In recent years the “Grey wolves” focused on the recruitment of people for war in Syria on the side of ISIL.

The fact that now the Crimean Tatar nationalists decided to cooperate with ‘Bozkurtlar’, is not surprising, as well as the worsening of Russian-Turkish relations. It is known that the Russian pilot, catapulted from the downed Su-24, was shot by the son of the leader of the “Party of the nationalist revival” and the Commander of ‘the Grey wolves’, Alparslan çelik. As was stated in an interview to Aleksey Zhuravko, now, in the Kherson region, there are about 700 fighters of ‘Bozkurtlar’. There are documented cases of attacks on local residents. In Kherson region the wolves are going to create some kind of ‘Tatar Republic’.

But it would be bad if the wolves had acted only according to Erdogan’s will. Everything points to the fact that they are backed by the Turkish leadership. But because of the threats issued by the radicals, their presence around the border with Crimea should be taken seriously.

The links between the Turkish leadership and the Gray Wolves were also revealed in September when Prime Minister Ahmet Davutoğlu visited the grave of Colonel Alparslan, the founder of the terrorist organization.