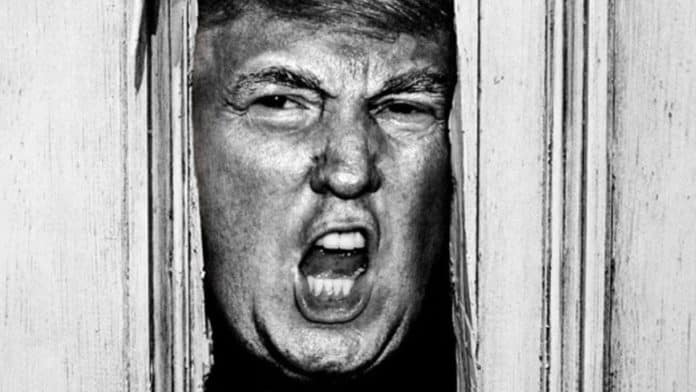 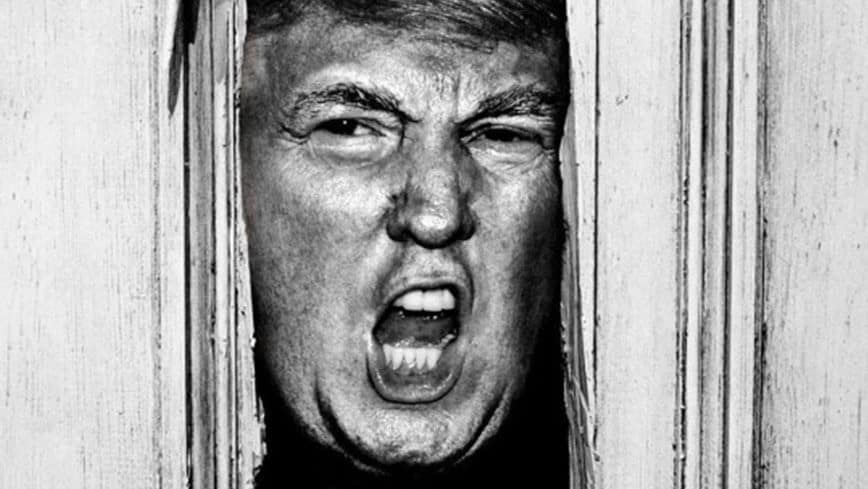 When you fully open the window of the American Political scene ~ you will see the true face of democracy as revealed in our Imperialistic wars, interventions, the suppression of human rights, the demands of the corporate state and it’s all apparent in the face and words of Donald Trump much like it was when Hitler became the angry fascist face of Germany in the 1930’s ~ reflecting the same right wing polarization and distrust of the government and media: Allen L Roland, PhD

“As democracy is perfected, the office of president represents, more and more closely, the inner soul of the people. On some great and glorious day the plain folks of the land will reach their heart’s desire at last and the White House will be adorned by a downright moron.” H.L. Mencken

We have almost reached that great and glorious day where the plain folks of this land have reached a place of such desperation, powerlessness and distrust that they are seriously considering electing a downright racist moron to the White House ~ Donald Trump. Flying the banner of resentment, distrust and anger, they have united behind the one candidate who appears to be talking their language and is willing to disregard the political correct rules that hamper the other candidates.

Patrick Martin, WSWS, offers the most appropriate description of candidate Trump ~ “His crude rhetoric shatters the official pretense that America is the defender of “freedom” and “democracy,” which has been used by Democratic and Republican administrations alike to justify imperialist wars and interventions throughout the Middle East, Central Asia and North Africa. Trump rips off this democratic mask. He stands openly for the violent suppression of anyone who might dare to oppose the demands of corporate America, either abroad or at home.”  See WSWS article ~

The Detroit Free Press, the largest newspaper in southeast Michigan, home to more than 100,000 Muslim-Americans, published a front-page editorial under the banner headline “We Stand Together.” The statement denounced Trump’s views as “nothing more than rank bigotry and racism, a reach back to the darkest chapters of America’s history.”

The American media issued a series of denunciations of Trump in editorials, cartoons and columns published Wednesday, many of which compared Trump to Hitler or Mussolini. CNN posted a column by its national security editor, Peter Bergen, posing the question, “Is Trump a fascist?”

Fascism promotes the establishment of a totalitarian state The Doctrine of Fascism states, “The Fascist conception of the State is all-embracing; outside of it no human or spiritual values can exist, much less have value. Thus understood, Fascism is totalitarian,and the Fascist State a synthesis and a unit inclusive of all values interprets, develops, and potentiates the whole life of a people.”

In The Legal basis of the Total State, Nazi political theorist Carl Schmitt described the Nazi intention to form a “strong state which guarantees a totality of political unity transcending all diversity” in order to avoid a “disastrous pluralism tearing the German people apart“. 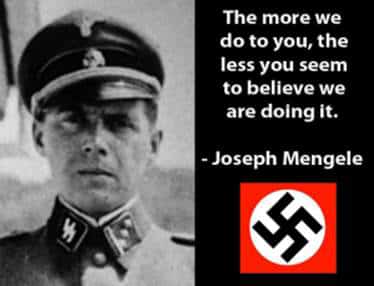 An excerpt from ‘They Thought They Were Free: The Germans, 1933-45’ by Milton Mayer:

“What happened here was the gradual habituation of the people, little by little, to being governed by surprise; to receiving decisions deliberated in secret; to believing that the situation was so complicated that the government had to act on information which the people could not understand, or so dangerous that, even if the people could not understand it, it could not be released because of national security. And their sense of identification with Hitler, their trust in him, made it easier to widen this gap and reassured those who would otherwise have worried about it.

“This separation of government from people, this widening of the gap, took place so gradually and so insensibly, each step disguised (perhaps not even intentionally) as a temporary emergency measure or associated with true patriotic allegiance or with real social purposes. And all the crises and reforms (real reforms, too) so occupied the people that they did not see the slow motion underneath, of the whole process of government growing remoter and remoter.”

It was from that deep right wing polarization and distrust of the government by the people that Hitler became the outspoken lightning rod voice of the disenfranchised and disillusioned in the 1930’s and the Jews became marginalized and virtually eradicated as the nationalized fascist corporate state was born.

Citizens United has now insured the survival of the corporate state in the united States and its financial tentacles have corrupted any meaningful election fairness which has set the stage for the politics of anger, resentment and eventually fascism. Thus the emergence of Donald Trump whose outspoken truth resonates with the oppressed and forgotten ~ much as Hitler’s did in the 1930’s as our democratic values of fairness and human rights slowly fades into the gathering moral darkness.

Mr. Trump, who has called for monitoring mosques and even barring Muslims from entering the United States, has been the clear beneficiary of this moment of deep anxiety and oppression among the vast majority of electorate. More than four in 10 Republican primary voters say the most important quality in a candidate is strong leadership, which eclipses honesty, empathy, experience or electability. These voters heavily favor Mr. Trump ~ and now white supremacist groups are capitalizing on Trump’s ride on the dark side of American politics.

Compare Trump’s fascist statements regarding Muslims with a British amputee soldier’s quote about Muslims ~ which he posted this week on Facebook;

Chris Herbert, who served in the British Army in Basra, Iraq, lost his right leg when a bomb went off next to his Land Rover in 2007. One of his comrades, Private Luke Simpson, died in the attack, while two other soldiers were also injured.

He told those holding the entire Muslim faith responsible for terrorism to:

“Get a grip of your lives, hug your family and get back to work.”

“Yes. A Muslim man blew me up, and I lost my leg,” he wrote. “A Muslim man also lost his arm that day wearing a British Uniform.

“A Muslim medic was in the helicopter that took me from the field. A Muslim surgeon performed the surgery that saved my life.

“A Muslim Nurse was part of the team that helped me when I returned to the UK.

“A Muslim Healthcare Assistant was part of the team that sorted out my day to day needs in rehabilitation when I was learning to walk.

“A Muslim taxi driver gave me a free ride the first time I went for a beer with my Dad after I came home.

“A Muslim doctor offered my Dad comfort and advice in a pub, when he didn’t know how to deal with my medicines and side effects.”

One man’s voice and grateful heart can make a difference on this planet and Chris Herbert is demonstrating this ~ Herbert, who lives in Portsmouth, on the south coast of England, said he took the decision to speak out after an “Islamophobic group tried to recruit” him as a poster boy for their organization.

He says that upon his return to the UK he was abused and discriminated against on a number of occasions by “white brits”.

Herbert’s post comes at the same time as a petition has been launched to prevent Donald Trump from entering the UK.

Over 400,000 people have signed the petition  ~ more than enough for a committee to consider sending the motion for parliamentary debate. See story

As Chris Herbert did, we must look deep within ourselves to find our truth and our choices in life and I for one choose to live in love and gratitude versus anger and hatred.

“A Native American elder once described his own inner struggles in this manner: Inside of me there are two dogs. One of the dogs is mean and evil. The other dog is good. The mean dog fights the good dog all the time. When asked which dog wins, he reflected for a moment and replied, The one I feed the most.” ~ George Bernard Shaw

Heart centered spiritual consultant and advisor Allen L Roland can be contacted at  [email protected] Allen is also a lecturer and writer who shares a weekly political and social commentary on his web log and website allenroland.com. He is also featured columnist on VT and  guest hosts a monthly national radio show TRUTHTALK on www.conscioustalk.net