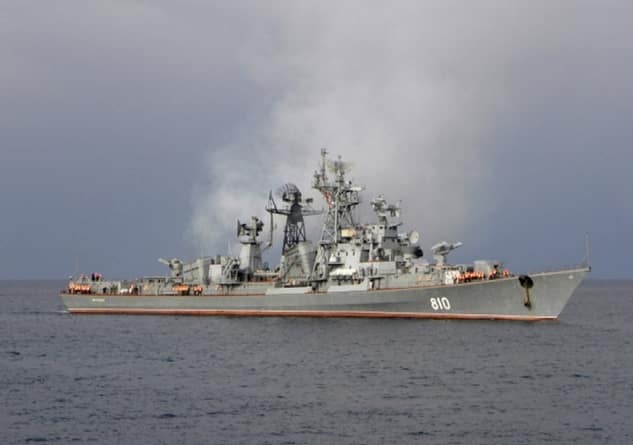 (video of ship itself, not the incident)
A Russian destroyer had to open warning fire as a Turkish fishing vessel sailed on a collision course towards them and didn’t respond to calls from the warship, the Russian Defense Ministry reported. The incident happened in the northern part of the Aegean Sea some 12 nautical miles from the Greek island of Lemnos, the ministry said.
The crew of the Kashin-class guided missile destroyer Smetlivy spotted the Turkish fishing trawler some 1,000 meters from the Russian warship early on Sunday morning, the ministry said. The ship was sailing towards the destroyer and ignored calls for radio contact and other attempts to communicate.
Read more

When the Turkish vessel approached to about 600 meters, the Smetlivy opened small arms fire at a spot in front of the trawler, taking care to avoid any risk of hitting the Turkish ship itself, the report said.

The ministry said the Turkish fishing ship changed course after that and kept about 540 meters from the Smetlivy, but didn’t contact the Russian warship.

“Russian Deputy Defense Minister Anatoly Antonov has summoned the military attaché of the Turkish embassy in Russia in connection with the incident in the Aegean Sea,” the statement said.

There is serious tension between Turkey and Russia after an incident on the Turkish-Syrian border, in which Turkish fighter jets shot down a Russian bomber conducting airstrikes against terrorist forces in Syria. Turkey said the move was justified by a 17-second incursion into Turkish airspace.

Russia denied the Russian warplane crossed the border and called the incident a stab in the back. Moscow accused Ankara of protecting terrorists in Syria to ensure a continued flow of smuggled oil to Turkey, which Russia says profits some senior Turkish officials.