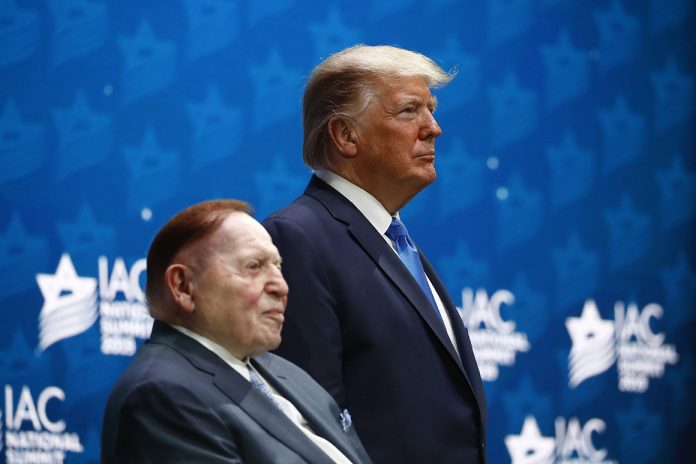 Editor’s note: We have suspected for some time that Trump is trying to sabotage his own campaign by saying “outlandish things.” At VT, we don’t believe American Jews are knowingly funding terrorism, except perhaps for the ADL, AIPAC, and groups we know to be tied to anti-American intelligence efforts.

We do, however, have more than minor proof of Israel’s involvement with the ISIS movement, which includes transiting and recruiting jihadists from among Hamas dissidents and supplying now over 1000 advisers who serve with ISIS, al Nusra, and other groups inside both Syria and Iraq.

Some have been killed and captured. Whatever Trump’s game is, we report and comment but the decision as to whether he means this or not is up to the reader. To that you can add the question, “is Trump doing these things because he figures he is stealing media coverage from the other candidates or is he really that out of control that anything can come out of his mouth at any time?

There is already a slang name for this, invented by VT, “Pulling a Donald”… Gordon Duff

US Republican frontrunner Donald Trump has implied that Israel is supporting Daesh (ISIS) by “sending massive amounts of money” to the Takfiri terrorists in Syria and Iraq.

Trump made the remarks in a recent interview with the Morning Joe show, shortly before he canceled his trip to Israel.

“Some of our so-called allies that we work with and that we protect militarily, they are sending massive amounts of money to ISIS and to al-Qaeda and to others,” he said, using an alternative acronym for the terrorist group.

He said that he will not mention US allies that support Daesh because of his relationship with Israelis, but noted that no one talks about Israel, even though everyone is aware of supporting Israel and other states provide to ISIS.

“There are, but I’m not gonna say it, because I have a lot of relationships with people. But there are. And you know that. And everybody knows that. And nobody says it. Nobody talks about it,” Trump said.

The multi-billionaire businessman said the US government knows about it, suggesting checking records to insure his claims are true.

“All you have to do is check your records. Our government knows the countries,” he stated.

On Thursday, Trump canceled his plan to visit Israel, saying he would reschedule “at a later date after I become President of the US.”

One reason he mentioned why he had called off his visit was that he did not want to put Israeli Prime Minister Benjamin Netanyahu “under pressure.”

Trump’s campaign has been marked by controversy from the start, but he leads the GOP field with 27 percent support in the Republican primary.

According to American writer Mickey Z., “It’s always interesting when Donald Trump peels away a propaganda layer to offer a tiny glimpse at the corporate-political brotherhood;” Press TV reported.

SOURCEAl Alam News, A Republic of Iran News Services
ATTENTION READERS
Due to the nature of independent content, VT cannot guarantee content validity.
We ask you to Read Our Content Policy so a clear comprehension of VT's independent non-censored media is understood and given its proper place in the world of news, opinion and media.