In 2013, VT investigators in the Republic of Georgia, working with Russia Today and Press TV discovered a secret American built weapons lab, designed by Bechtel Corporation, in Tbilisi, Georgia.

Members of Georgia’s intelligence agencies, working with Ukranian extremists, Turkish intelligence and al Qaeda and with cooperation from NATO, shipped chemical weapons including Sarin gas and or needed pre-cursors through Turkey into Syria.

Now two Turkish members of parliament have obtained evidence of part of that plot, one that led to the murder of Press TV correspondent Serena Shim and more recently, to an investigation and coverup that may well lead to the arrest of two Turkish government officials who have released evidence of Turkey’s participation in attacks on Syria.

The attacks, sarin gas which may have killed up to 2000, took place in 2013 against Gouta, Syria and were blamed on the Damascus government.  However, when VT with RT and Press TV presented “slam dunk” documentary evidence of US and NATO complicity in the attacks, evidence gotten from “careless” Bechtel employees, the US backed down on its plan to bomb Damascus.

Now that new evidence has been presented tying Turkey to these attacks, the US is not only ignoring the facts but there is a press blackout in the West against the story.

A treason investigation has been launched against a Turkish MP who alleged in an exclusive interview with RT that Islamic State jihadists delivered deadly sarin gas to Syria through Turkey. Ankara’s Chief Prosecutor’s Office opened the case against Istanbul MP Eren Erdem of Republican People’s Party (CHP) after his interview about sarin was aired on RT on Monday.

“Chemical weapon materials were brought to Turkey and put together in ISIS camps in Syria, which was known as the Iraqi Al-Qaeda at that time.”

Erdem noted that the chemicals used for the production of weapons did not originate from Turkey. “All basic materials are purchased from Europe. Western institutions should question themselves about these relations. Western sources know very well who carried out the sarin gas attack in Syria,” Erdem told RT.

As Turkish media reported Wednesday, the prosecutor’s office is planning to send a summary of proceedings to the Ministry of Justice on Thursday. Following that, the summary may be forwarded to the Turkish parliament, which could vote to strip Erdem of his parliamentary immunity.

Once Turkish mass-media reported the criminal investigation had been opened against Erdem, the hashtags #ErenErdemYalnızDeğildir – #ErenErdemYouAreNotAlone began to circulate in Turkish social networks.

On Tuesday, MP Erdem issued a written statement in his defense, saying he had become the target of a smear campaign because of his statements made in parliament.

As for his accusations about Turkish businessmen being involved in supplying Islamic State (IS, formerly ISIS/ISIL) with the poisonous gas sarin and other reactants needed for chemical warfare, Erdem maintained this statement was made based on the results of a Turkish court investigation in 2013.

Erdem revealed that five Turkish citizens had been arrested by the Adana Chief Prosecutor’s Office as a result of an investigation coded 2013/139. A Syrian national was prosecuted in Turkey for procuring chemical agents for Islamist groups in Syria. At the same time, Erdem noted all the persons arrested within the framework of the 2013/139 investigation were released a week later. 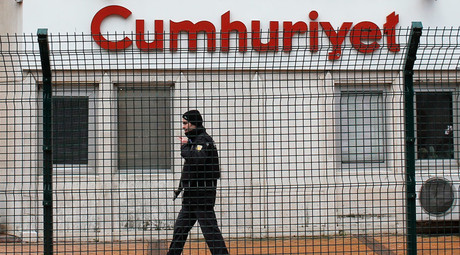 In his statement Eren Erdem claimed he had received death threats over social media following the publication of his interview to RT.Eren Erdem said that the Turkish paramilitary organization Ottoman Hearths has published his home  address on Twitter in an effort to enable at an attack on his house.

“I am being targeted with death threats because I am patriotically opposed to something that tramples on my country’s prestige,” MP Erdem said.

In an interview to Turkey’s Kanal 24 on Tuesday, Cem Küçük, a columnist at the pro-government Star daily, said that Erdem’s claims about sarin gas should be regarded as treason. Erdem should be stripped of his parliamentary immunity to“pay for his deeds,” Today’s Zaman cited Küçük as saying.

The Turkish public is “very much polarized” and those supporting the government and followers of the ruling Justice and Development Party (AKP) make up “about half of the country,” Hisyar Ozsoy, Turkish MP for leftist HDP party, told RT.

“They really do not care about what is happening in terms of freedom of expression,” Ozsoy said, adding that “anybody who is critical of the government is facing incredible pressure: indictments, court cases, even imprisonments.”

The Turkish government – and the president in particular – use polarization of the Turkish community as a mode of carrying out politics that very much worries the other half of the citizenry.

The most widely-reported chemical attack in Syria took place in the early hours of August 21, 2013, in Ghouta, on the outer fringes of Damascus. Rockets containing sarin gas were reportedly fired, killing more than 1,400 people, including no fewer than 426 children. It was on the very day a UN team of inspectors arrived in the city to investigate the alleged March 19 chemical attack in Khan al-Assal, northern Syria.