IS provides women and underage children in a kind of virtual slave market with photos for sale. This was revealed by research conducted by NDR and SWR, talking to affected families and negotiators and could evaluate relevant documents.The transfer of money, so the reporter found out, it runs also through IS-liaison office in Turkey.

There are mainly Yezidi families that buy back their loved ones, to save them. About a year ago, the terrorist group IS raided large parts of northern Iraq and then brought thousands of women and children as war booty into their hands. Meanwhile, the self-styled Islamic State uses the Yezidis also to finance its organizations. NDR and SWR accompanied weeks a Yezidi negotiator who negotiates on behalf of the families on the release of the slaves and their children with the IS. Using chat logs, documents, photographs and witness statements can be reconstructed perfidious system.

Some of the women are sold in a digital slave market to the highest bidder. 15,000 to 20,000 US dollars are a common price.Similar sums are also required at the ransoming of Yezidis. The money is then transferred via IS-liaison offices and middlemen to the terror group. In the course of our research it became clear that such an office is located near the border with Syria in the Turkish industrial town of Gaziantep – apparently unnoticed by the Turkish security authorities.

A jesidischer negotiator stated against NDR and SWR to have in the course of last year, about 250 women and their children exempted and thereby paid a total of more than 2.5 million US dollars. The money comes from Yezidi families who use their savings and loans to raise the sum.

Also, a semi-governmental organization of the incumbent Prime Minister of northern Iraq, Nechirvan Barzani, apparently pays part of the ransom – ultimately unintentionally to his enemy, the IS.

NDR and SWR were present at the liberation of a woman and her three small children aged between two and four years of age  and were able to accompany the development of the negotiations. How many Yezidi slaves are still “owned” by the IS is unclear. Experts estimate that there still could be hundreds. A lucrative business for the IS. Read more on Sunday 29 November at 19.20 in the “mirror world” in the First

RT: The head of a regional Turkish legal association says the organization has filed a criminal complaint against the Turkish authorities after a German documentary alleged that Islamic State are carrying out a slave trade of women on Turkish soil.
Bektas Sarkli, the head of Gaziantep Bar Association, has brought the suit against the Turkish law enforcement and intelligence agencies following allegations that Yazidi women and children were being trafficked.

“We decided to file a complaint after the allegations were made on German ARD TV. They alleged that the Yazidi people were traded by ISIS (Islamic State/IS) in a slave market here in Gaziantep. The prosecution must investigate this,” Sarkli said.

“If there is evidence, then the suspects must be caught and tried. If there has been neglect of duty on the side of the security forces or intelligence, then they must be punished,” he added.

The documentary followed a Kurdish man who buys back slaves that have been captured by Islamic State and returns them to their families.

The person contacts the terror group over the internet, before travelling to Turkey to complete the deal. The transactions allegedly take place in the city of Gaziantep, which is only 40 kilometers away from the Syrian-Turkish border.

The man in question says he has paid IS around US$2.5 million in 2015 to return women and children to their families.

The allegations have also been condemned by Mahmut Togrul, a Turkish MP from Gaziantep. He says that more needs to be done to try and stop the flow of IS fighters freely crossing the Syrian-Turkish border, while he also alleges that the Turkish authorities do not always regard IS as “terrorists.”

“During our observations here, we have shared with the Turkish public that ISIS was moving freely in Gaziantep and the city has become a support line for them. There is the presence of thugs from all over the world who are able to cross the border, while they even have the nerve to tell Turkish soldiers that they want to join ISIS. This means they have hundreds of contacts here,” he told RT.

“We reiterate our calls to the authorities that measures have to be taken. Subconsciously, the authorities still do not regard ISIS as a terrorist organization and their members as terrorists,” Togrul, who is a member of the Peoples’ Democratic Party, added.

The Yazidis have been on the receiving end of some of the worst atrocities carried out by IS, with numerous mass graves having been uncovered in Iraq and Syria.

The jihadists argue that capturing Yazidi women is justified because they are “unbelievers” and do not follow Islam. According to a pamphlet released by IS at the end of 2014, members are permitted to have sex with Yazidi women, especially if those captured are virgins. If the woman is not a virgin, the manual reads that “her uterus must be purified”before intercourse. 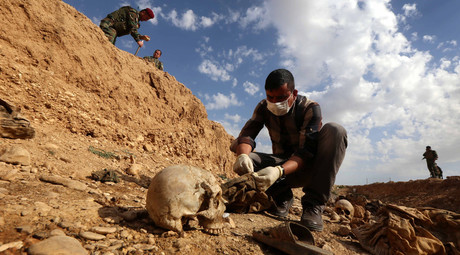 ‘Genocide of Yazidis’: Booby-trapped grave with over 120 ISIS victims found in Iraq

An estimated 3,000 to 5,000 Yazidi women are currently being kept as sex slaves by IS. They are frequently traded amongst the militants, while girls as young as eight are amongst those captured.

One woman who gave a firsthand account of the brutal nature of IS was Khalida. She spoke to RT about her barbaric experience after being captured by the militant group.

“They took the men out and then we heard the sound of gunfire. I was given to a Saudi Arabian and he took my son away for 40 days. I begged him to bring my son back and said my father would pay him money. He replied: ‘Your father will not pay up as he is an infidel.’ When they brought my son back I saw there were marks on his back where he had been severely beaten,” she said.

“They would not let me feed my baby girl. They would let me breastfeed her for three minutes and then they would take her away. They told me if I cried, they would kill both my children,”Khalida added.

However, the fate of those captured can be even worse, as Nadia Murad Basee Taha, who managed to escape from the terrorist group, told the UN.

“[My captor] forced me to serve as part of his military faction and he humiliated me every day. I implore you to get rid of Daesh (a derogatory terms for IS) completely. I went through this terrible suffering because of them. I have seen what they have done to boys and girls… All those who commit these crimes of trafficking and genocide must be brought to justice so that women and children can live in peace,” she said.

Some locals are trying to do their bit to help the plight of the Yazidi people. RT’s documentary channel caught up with Abu Shuja, who is trying to free as many Yazidi women and children as possible, despite having a $500,000 bounty from IS hanging over his head, while 15 of his accomplices have been killed by the terrorist organization.

With support from his family, who fear for his life but accept and praise what he has to do, Shuja continues freeing Yazidis from captivity.

“We all die eventually. Death only comes once. Dying twice would be a problem,” Shuja says. “I’d rather die a brave, honorable death than a shameful one.”