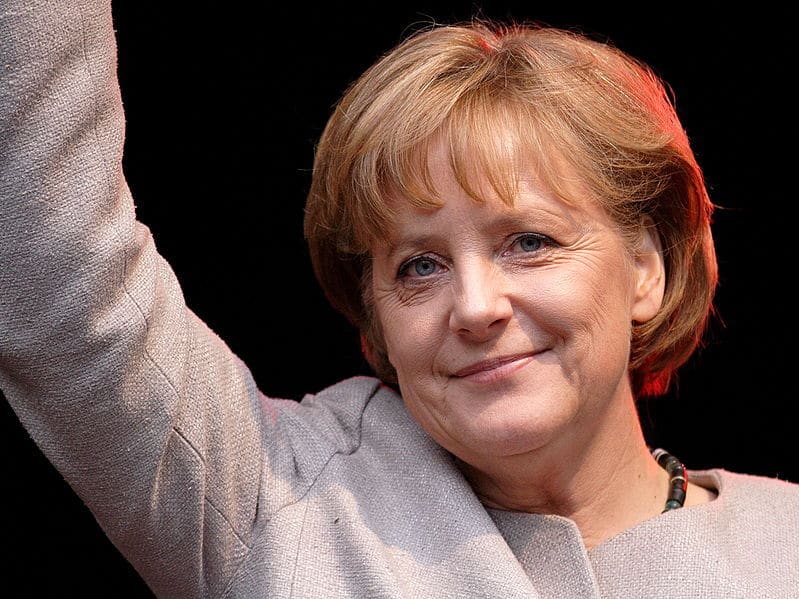 Angela Merkel has indirectly declared that the New World Order has sought to destroy Germany through “multiculturalism.” Merkel lamented that “multiculturalism,” which is one of the NWO’s greatest weapons, “is a living lie.”

“Multi-kulti leads to parallel societies and is a living lie,” she said, and “Integration is the opposite.”[1] After preaching the doctrine of multiculturalism for more than forty years in America, Dorothy Rabinowitz of the Wall Street Journal ended up saying the same thing. Multiculturalism, which Dabinowitz described as “the unofficial established religion of the universities,” has actually “led to segregated communities.”[2]

Well, this was precisely what Barbara Spectre intended to do when she propounded that revolutionaries like herself would use “multiculturalism” to change the social and cohesive dynamic of Europe.

Merkel does not want to point out that “multiculturalism” was crafted specifically by the New World Order to destroy or attack the moral and social order. In fact, Merkel does not want to admit that she was one of the dumb Goyim who brought the system to Germany. Now she is implicitly admitting that she has made a serious mistake. She said:

“A continuation of the current influx would in the long-term overwhelm the state and society, even in a country like Germany.”[3]

Well, duh! What country in the entire world would accept such a suicidal enterprise? Who in his right mind will accept such a diabolical plan?

But surely Merkel is not that stupid. She knew pretty well that you cannot accept at least one million so-called Syrian refugees within one year without paying severe consequences. She knew that German laws and traditions were at stake when she invited those refugees.[4]

Most importantly, Merkel ought to know that one cannot make a diabolical deal with the New World Order in perpetuating one war after another in the Middle East without serious repercussions. As we have argued, you cannot seek to destroy a country like Syria and expect people to stay in the same slaughtered house. They have to move. They have to seek refuge elsewhere.

This again brings us to the central point that Merkel was involved in creating the problem in the first place, which is what Gordon Duff indirectly talked about earlier.

But Merkel seems to realize that she has no choice but to allow those so-called Syrian refugees into Germany because she supported the detrimental idea that Assad had to go. In 2014, she completely ruled out working with Assad.[5] In 2013, she was even happy when things weren’t going well for Assad. She said then,

“In view of the terrible events the impression is mounting that China and Russia realize that Mr Assad no longer has a future, that his time is up and that there must be a democratic government.”[6]

Thanks to Vladimir Putin, Assad is still in power. Obviously Merkel has changed her position and has repeatedly declared toward the end of this year that “Assad must be involved in Syria talks.” “We have to speak with many actors,” she said last September, and “this includes Assad, but others as well.”[7]

Merkel has obviously realized that the refugee crisis has been a burden for Germany, therefore she is now trying to turn the tides. To fix the crisis, she said last September, the West needs to deal with the “dreadful situation in Syria,”[8] which is exactly what we have been saying for the past two years.

There is a deeper issue here. Merkel is a public figure, therefore it would be hard for her to say that she does not know some of the key players in the Syria war. She obviously knows that people like George Soros have played a major role in flooding Europe with those refugees. As F. William Engdahl has pointed out:

“Since John D. Rockefeller was advised to protect his wealth from government taxation by creating a tax-exempt philanthropic foundation in 1913, foundations have been used by American oligarchs to disguise a world of dirty deeds under the cover ‘doing good for mankind,’ known by the moniker ‘philanthropy’ for mankind-loving.”[9]

In other words, in the name of “philanthropy” and “NGO,” oligarchs like Soros can engage in virtually any pernicious act you can imagine.

“Under the false pretext of ‘democracy promotion’ the notorious magnate created a network of foundations and instigated a series blatant regime changes in Eastern Europe and the former Soviet republics after the collapse of the USSR.”[10]

“Now his foundations are up to their eyeballs in promoting propaganda serving the US-UK war agenda for destroying stability in Syria as they did in Libya three years ago, creating the current EU refugee crisis.”[11]

Soros is obviously using the Syrian crisis to destroy Europe. He said unequivocally:

“The EU should provide €15,000 ($16,800) per asylum-seeker for each of the first two years to help cover housing, health care, and education costs — and to make accepting refugees more appealing to member states. It can raise these funds by issuing long-term bonds using its largely untapped AAA borrowing capacity…”[12]

So, Soros wants complete revolution and chaos in Europe. Soros, as we now know, was involved in one of the greatest looting expeditions of all time: the destruction of the Russian economy in the late 1990s.[13] Recently, good old George has been “funding activists trying to encourage the continued flow of refugees heading to the continent from the Middle East and beyond.”[14]

Old George has also been funding the Black Lives Matter movement,[15] which is a complete lie from top to bottom.

What is the end result of Soros’ revolutionary project? Complete chaos. Destruction of society. Revolution. More importantly, racial hatred. His real job is to incite and provoke the Goyim to hate each other and then they will end up killing themselves like hamsters. As Poland-based journalist and publicist Konrad Stachnio has put it:

“Every time I see the old, good George Soros saying something about democracy and European values, I know that something is going to happen.

“This is the case in Ukraine, when George argued that democracy is the most important thing and when he says that European values are most important and that is why we must accept million refugees every year. How will it end?

“Probably as usual: fires, riots, overthrowing governments and total destabilization in Europe, more or less as it ended up recently in Ukraine.”[16]

Angelal Merkel is finally understanding what Stachnio is talking about here. She is seeing darkness at the end of the New World Order tunnel, and she is afraid to go through tunnel. She seems to be looking for a real solution.

Will she listen to some advice? Will she attack those who perpetuate that darkness, that “living lie” in Europe? Russia has banned Soros from entering the country. Will Merkel ban Soros for coming to Germany?

This has been one of my major problems with Donald Trump and with people like Patrick Buchanan who implicitly keep dumping the real problem on the Muslims[18] while the elephant in the room is destroying the house. Why is a British Muslim family of 11 being denied access to their plane by the U.S. Department of Homeland Security without sufficient reason?[19]

I am not an executioner, and people of reason shouldn’t fear me. What I am saying is that by deliberately ignoring or dismissing the central issues, Merkel and Trump are directly or indirectly in cahoots with the enemy.

If Merkel and Trump cannot forthrightly address the fact that Israel and Turkey play a major role in spreading ISIS and therefore perpetuating the Syrian war,[20] if they cannot see Assad’s point that “Europe, Turkey, Qatar and Saudi Arabia” have transformed Syria “into a hotbed of terrorism,”[21] and if they are not prepared to declare that terrorist groups like ISIS have perverted aspects of Islam for their own ends,[22] then one is justified in saying that they are either sleeping with the enemy or are indirectly protecting the real mob. If this sounds farfetched, then consider this.

On the 100th anniversary of the Anti-Defamation League, Haaretz posed this dilemma to director Abraham Foxman:

“You don’t think that ‘Muslim-baiting’ is much more acceptable in the mainstream media than, say, ‘Jew-baiting’? There is a Congressman now who is calling for the authorities to keep track of the entire Muslim community.”[23]

“I don’t think that’s Muslim-baiting. It’s a natural response. It may be wise or unwise. But I think America’s got an issue now, and not only America. You look at France, you look at London, you look at Amsterdam – most of these incidents have come from Muslim communities that have been brought in and are not assimilating.

“Just like after 9/11, America is now questioning where the balance is between security and freedom of expression: Should we follow the ethnic communities? Should we be monitoring mosques? This isn’t Muslim-baiting – it’s driven by fear, by a desire for safety and security.”[24]

Are the dumb Goyim paying any attention at all? You can spy on Muslims any day and it is rational because Muslims have committed too many terrorist acts, the argument goes. But when the Goyim spy on Jewish banking criminals, Foxman would spend much of his time writing an entire book arguing that this is plain conspiracy theory.[25]

What about scholars like John J. Mearsheimer and Stephen M. Walt who have really deconstructed the Zionist ideology in books such as The Israel Lobby and U.S. Foreign Policy? They too are either anti-Semites or self-hating Jews. In fact, Foxman would like to tell you that scholars who pursue such research are promoting some of the “deadliest lies” ever.[26]

If the Goyim cannot see the political game here, then they have almost certainly left their brain cells in the Zionist universe.

If the Goyim cannot use practical reason to dissect the flaws in the political categories which pernicious people like Foxman have imposed upon America, then what is their defense and weapon? We all know that both political parties in the U.S. have been usurped by powerful agents a long time ago.[27] Perhaps it is time for the Goyim to bring practical reason back to the table.

[17] Lianna Brinded, “The real reason for Merkel’s U-turn over her open-door policy for refugees is very simple,” Business Insider, December 20, 2015.

[20] Even Philip Giraldi is now beginning to point this out. Philip Giraldi, “Coalition of the Unwilling,” American Conservative, December 22, 2015.

[23] Quoted in Chemi Shalev, “Even After Boston, There Is More anti-Jewish Than anti-Muslim Sentiment in U.S., Says ADL’s Foxman,” Haaretz, April 28, 2013. “Muslim-baiting” has been going on for quite a while now. See for example Glenn Greenwald and Murtaza Hussain, “Meet the Muslim-American Leaders the FBI and NSA Have Been Spying On,” The Intercept, July 9, 2014.

[27] For a recent development, see for example Richard Silverstein, “ANALYSIS: Casinos, Newspapers, Elections: If It Can Be Bought, Sheldon Adelson Will Buy It,” MintPress News, December 18, 2015.