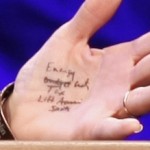 Update: Those not yet convinced of the brilliance of this magnificent woman can see the video below at the end of this piece.
Sarah Palin’s address at the Tea Party Nation (TPN) convention in Nashville and follow-up Fox Newsinterview broadcast Sunday morning dealt a crippling blow to the political hopes of American liberals, elitists, socialists, and all manner of Wiccans.

Such elitist luminaries as Noam Chomsky, Jeff Gates, Uri Avnery, Gordon Duff and Mr. Know-it-all Glenn Greenwald over at Salon were schooled Palin-style, as she reportedly “bounded onstage to cries of ‘run, Sarah, run’ and then delivered a stinging rebuke of President Obama while striking a populist, even folksy tone. Serving up fiery rhetoric with a broad smile, she attacked the administration’s policies on the economy and on national security, assailing in particular the decision to read Miranda rights to the man accused of attempting to bomb a U.S. airliner on Christmas Day,” the birthday of the Lord (Philip Rucker and Ann Gerhart, Washington Post, Feb. 7, 2010).

Sarah, oh Sarah, what ever made you want to change your mind? … So easy to look at, so hard to define.

Five years after Palin’s church, the Wasilla Assembly of God,launched a crash spiritual project protecting Palin from “the spirit of witchcraft,”—ultimately seeing her elected as governor of Alaska where she served a brief tenure while also running as the 2008 vice-presidential nominee for the Republican Party—Palin’s paid speech at TPNsent Israeli critic, Jeff Gates, fleeing out of the country to Pakistan where Gates reportedly will be meeting with elements of the American ally’s large Islamic population, planning the next caliphate.

Assuming the national political stage after her wildly successful book tour ended in December, Palin brandished on her lapel a small pin composed of two flags, those of Israel and the United States, as she offered advice and a warning to President Obama on the policy of not waging war against Iran in support of Israeli militarism.

‘Say [Pres. Obama] played the war card,’ she said, casually name-checking Pat Buchanan, whose column apparently inspired this bit of analysis. ‘Say he decided to declare war on Iran or decided to really come out and do whatever he could do to support Israel — which I’d like him to do. That changes the dynamics and what we can assume is gonna happen between now and three years. Because I think if the election were today, I do not think Obama would be elected.’

It’s not so much that Palin thinks Obama would declare war on the 17th most populous country in the world just to win re-election. It’s more that if he did do something like that, it would give people second thoughts about his failed presidency.

Another noted critic of Israeli militarism and the apocalyptic-Christian rapture alliance, Gordon Duff, a combat Marine Vietnam War veteran and senior editor of Veterans Today, was unreachable by phone this morning.

Duff went into hiding where he is “reconsidering his anti-American ideology” and asking himself why he “hates America” after viewing the Palin address on C-Span’s Recent Programs, said a source who spoke on the condition of anonymity because of the sensitivity of the topic.

In a related development, an examination of the comments on a recent piece at Veterans Today, Christians Desecrate Wiccan Religious Site at Air Force Academy, reveals that commenting Wiccans and humanists’ e-mail suffixes often end in “edu,” demonstrating that many readers of the popular site’s Wiccan piece are elitists.

Meanwhile, another snotty female elitist living in DC, Wonkette, was largely silent on her site, apparently cowed by Palin’s address that was delivered just months after the elitist had derided Palin as “Clown Moose” and “Noted Dingbat.”

Said a Palin supporter living in Wisconsin who refused to give his name to a “liberal-looking” questioner, “You elitists can take your fancy footnotes and your rules of inference and stick ’em in northern Alaska when all the Sun does is shine and shine.”