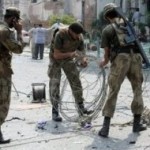 No doubt after chewing our troops up, the DVA will rush in to facilitate expedited delivery of benefits. Right. For those stuck on history and facts consider in a short preface: A New Strategy for Afghanistan and Pakistan (March 27, 2009) and the White House White Paper.

Therefore, the core goal of the U.S. must be to disrupt, dismantle, and defeat al Qaeda and its safe havens in Pakistan, and to prevent their return to Pakistan or Afghanistan.

And from Dec. 1, 2009; Remarks by the President in Address to the Nation on the Way Forward in Afghanistan and Pakistan:

First, we will pursue a military strategy that will break the Taliban’s momentum and increase Afghanistan’s capacity over the next 18 months.
The 30,000 additional troops that I’m announcing tonight will deploy in the first part of 2010 — the fastest possible pace — so that they can target the insurgency and secure key population centers.  They’ll increase our ability to train competent Afghan security forces, and to partner with them so that more Afghans can get into the fight.  And they will help create the conditions for the United States to transfer responsibility to the Afghans.

The Post report, by Greg Jaffe and Craig Whitlock, both of whom cover military affairs, said the town of Marja would not have been chosen as a target for a U.S. military operation had the criterion been military significance instead of impact on domestic public opinion.

The primary goal of the offensive, they write, is to ‘convince Americans that a new era has arrived in the eight-year long war….’ U.S. military officials in Afghanistan ‘hope a large and loud victory in Marja will convince the American public that they deserve more time to demonstrate that extra troops and new tactics can yield better results on the battlefield,’ according to Jaffe and Whitlock.

Read the full piece here. Here’s a bit more from the Post story:

‘You want to be able to define your narrative, and we’ve had trouble doing that in the past,’ said Mark Moyar, who has served as a civilian adviser to U.S. commanders in Afghanistan. McChrystal is under pressure to show progress fast: President Obama has directed that U.S. troops begin to withdraw in July 2011.

In recent days, U.S. commanders in Kabul and Washington have gone to great pains to describe the Marja offensive as a new beginning. ‘This is the start point of a new strategy,’ one senior military official told reporters on Thursday. ‘This is our first salvo.’

Here’s another gem: “[I] n purely military terms, sending 11,000 U.S. and Afghan troops to defeat a few hundred Taliban fighters in Marja won’t change much in Afghanistan. The greater significance of the battle is in how it is perceived in the rest of Afghanistan and in America.”
—
Pakistan

Are we seeing a historic shift in Pakistan? In the latest issue of The New Yorker, journalist Steve Coll offers his thoughts on “Taking on the Taliban,” arguing that “there are few strategic issues of greater importance to the outcome of President Obama’s Afghan war [as Pakistan].” Simply put, one of the root problems for NATO in Afghanistan is its militarized neighbor, Pakistan, which has a historically cozy relationship with the Taliban. Coll discusses the latest development in the Afghan War — the capture of senior Taliban commander Mullah Baradar — and places it in the context of an ostensible change in Pakistan’s strategic priorities in Afghanistan. After facing a string of terrorist attacks last year that killed 3,021 people — including an attack on the Pakistani Army’s headquarters in Rawalpindi in October 2009 — the country’s military may be considering greater cooperation with the United States in the fight against the Taliban in both Pakistan and Afghanistan.

The root problem in this murkiest theatre of the Afghan war is not Pakistan’s national character or even the character of its generals; rather, it involves Pakistan’s interests. The Pakistani Army has learned over many years to leverage its grievances, dysfunction, bad choices, and perpetual dangers to extract from the United States the financial and military support that it believes it requires against India. At the same time, Pakistan’s generals resent their dependency on America. For the I.S.I. [the Inter-services Intelligence agency] to repudiate the Taliban entirely, its officers would have to imagine a new way of living in the world — to write a new definition of Pakistan’s national security, one that emphasizes politics and economics over clandestine war. For now, many Pakistani generals imagine themselves masters of an old game: to be not so sweet that they will be eaten whole by the United States, but not so bitter that they will be spat out.

Coll hesitates to declare the recent cooperation from the Pakistanis as necessarily indicative of a strategic shift. He is convinced that unless “the geopolitical incentives that have informed Pakistan’s alliance with the Afghan Taliban” are altered, the United States and NATO will continue to have a precarious ally to the east.

12:00 PM ET — CNN reports from Marjah.— In the video below, CNN’s Atia Abawi follows a group of U.S Marines as they engage in gun battles with the Taliban. The Taliban have visibly dispersed from the area; they are attacking U.S troops by surprise in small groups of 10-14 and using trained marksmen. Abawi observes that Operation Moshtarak “is moving slowly but surely. The Marines are making some headway,” while also noting the persistence of the Taliban resistance. ISAF’s Joint Command’s latest update claims that the Operation has made significant headway in creating security for future development and better governance — two key aims of the offensive.
ATTENTION READERS
Due to the nature of independent content, VT cannot guarantee content validity.
We ask you to Read Our Content Policy so a clear comprehension of VT's independent non-censored media is understood and given its proper place in the world of news, opinion and media.